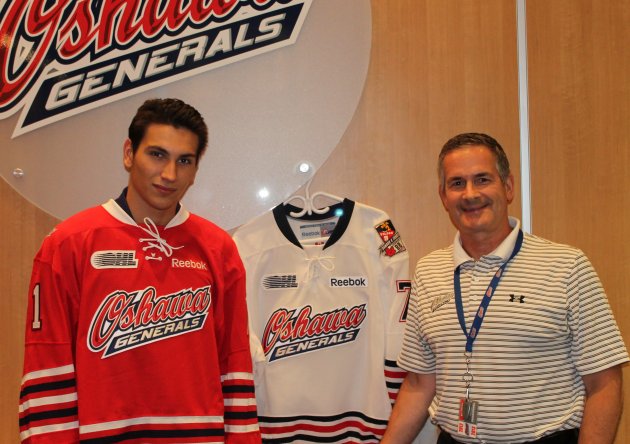 The Oshawa Generals are pleased to announce the signing of their 1st round pick from the 2012 OHL Priority Selection, Michael Dal Colle to a standard OHL contract.

Dal Colle, 16, was the 7th overall selection in this year’s draft after he spent last season with the Vaughan Kings.  In 42 games last season he scored 44 goals while adding 34 assists for 78 points.

“We are really happy to welcome Michael and his family to the Generals. Michael is a great combination of skill, size and hockey sense,” said General Manager Jeff Twohey.  “He will be an exciting player for the Generals fans to watch develop over the next four seasons.  Along with his hockey ability, Michael brings a quiet maturity and some strong leadership potential to our team.”

The 6-foot-2 centre recently took part in Team Ontario’s Under-17 Provincial Camp which took place in Cornwall, Ontario from July 4th through 8th.

“Myself, DJ Smith, Roger Hunt and Paul McFarland are excited to add Michael to our team and we all look forward to working with him over the next four seasons.”

Fans can watch Michael Dal Colle and the rest of the Generals play all season long by purchasing 2012-2013 Season Tickets which are on sale now.  To purchase Season Tickets please call Jason Hickman at the Generals Business Offices at 905-433-0900 ext. 2226.