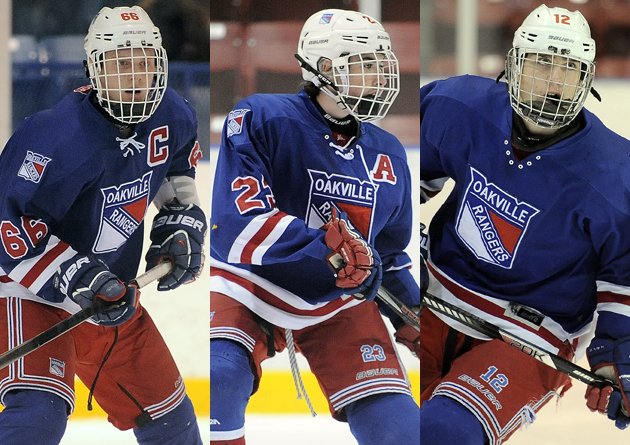 The first round of the 2013 OHL Priority Selection wrapped up Saturday morning April 6 with 19 players chosen from 13 different minor midget teams.

The OHL Cup Champion Oakville Rangers of the OMHA led the way with a trio of players selected among the Top-10 picks including third overall pick Matt Spencer to the Peterborough Petes, fellow defenceman Kyle Capobianco went seventh overall to the Sudbury Wolves, and centre Brett McKenzie became the first ever pick of the North Bay Battalion at number 10.

Four other clubs had a pair of players selected including the ALLIANCE Champion Elgin-Middlesex Chiefs led by top pick Travis Konecny to the Ottawa 67’s, and followed by forward Lawson Crouse who went fifth overall to the Kingston Frontenacs.  Also from the ALLIANCE, the London Jr. Knights Gold program had two first round picks led by Mitchell Vande Sompel to the Oshawa Generals at 14, and Ethan Szypula to the Owen Sound Attack at 17.

The OHL Cup Finalist GTHL Toronto Marlboros also had two players selected in the Top-10 with Dylan Strome going second overall to the Erie Otters, and forward Mitchell Stephens to the Saginaw Spirit, while the OMHA Finalist Whitby Wildcats also had two players selected including Hayden McCool who went sixth overall to the Niagara IceDogs, and Justin Lemcke who went 18 to the Belleville Bulls.

Sean Day of Detroit Compuware, the fourth player ever to be granted Exceptional Player Status and the youngest player eligible for the 2013 OHL Priority Selection, was chosen fourth overall by the Mississauga Steelheads.

Other picks included Nikita Korostelev of the Toronto Jr. Canadiens who was chosen ninth overall by the Sarnia Sting, NOHA Player of the Year Blake Speers who was chosen 11th by his hometown Sault Ste. Marie Greyhounds, followed by defenceman Garrett McFadden of the Grey-Bruce Highlanders who went 12th to the Guelph Storm, and 13th overall pick Mike Davies of the Southern Tier Admirals selected by the Kitchener Rangers.

Two picks later Matthew Kreis of the Halton Hurricanes went 15th overall to the Barrie Colts, followed by Jordan Greenway of Potsdam, NY, who was the only American-born player chosen in the first round at number 16 by the Plymouth Whalers.  Mitchell Marner of the Don Mills Flyers closed out the first round of picks selected 19th by the defending champion London Knights.