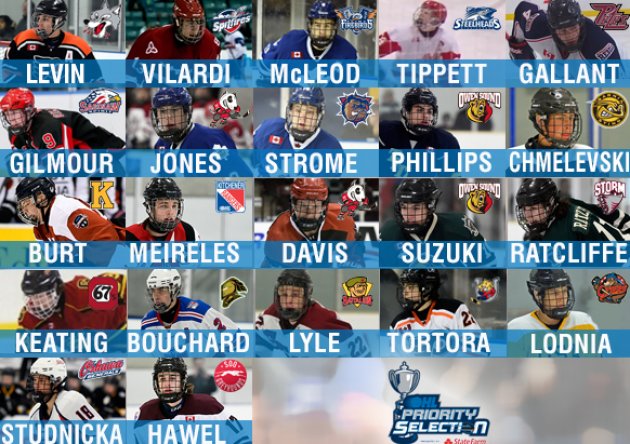 22 players from 16 different organizations were chosen in the first round of the 2015 OHL Priority Selection presented by State Farm held on Saturday April 11.

Four different teams had two players selected in the first round, including the OHL Cup Finalist Don Mills Flyers who saw winger David Levin go first overall to the Sudbury Wolves while fellow forward Jacob Tortora was selected by the Barrie Colts at 19th overall.

The GTHL’s Mississauga Rebels had two teammates go within the first 11 picks of the morning. Centreman Zach Gallant was selected fifth overall by the Peterborough Petes before winger Robbie Burt went to the Kingston Frontenacs at 11th overall.

A pair of London Jr. Knights teammates were selected back-to-back in the latter half of the first round. ALLIANCE Player of the Year Nick Suzuki was taken 14th overall by the Owen Sound Attack, one pick before big 6’5″, 183Ib winger Isaac Ratcliffe was selected by the Guelph Storm.

Detroit Honeybaked forwards Sasha Chmelevski, who went 10th overall to the Sarnia Sting, and centreman Vanya Lodnia, who was selected 20th overall by the Erie Otters round out the group of teammates selected in the first round.

Learn more about the 2015 first round draft class below with reports from OHL Central Scouting.

“David is one of the most purely gifted offensive talents in this year’s draft. He has the ability to make an opposing player look very silly and he does it with such ease. Things come very easy for him especially considering he has only been playing hockey for three seasons.”

“Gabe is a skilled forward with a great shot and release. His shot is heavy and hard and he shoots the puck from almost anywhere. OEMHL Player of the Year is offensively creative, gets open and finds others when he has the puck. He plays a 200-foot game and looks like he cares about playing solid defense.”

“Ryan is an effortless skater that can beat a defender as if he were standing still. GTHL Player of the Year and OHL Cup MVP has the ability to slow the game down when he needs to. He is a playmaker first, always looking to set up his teammates. Ryan is a force offensively each time he is on the ice.”

“Owen is one of the most talented players in this year’s draft. He has all the tools to become a very good player in our league. He has a good scoring touch to go along with his speed and agility. He has explosive speed and if he gets a step on a defenceman, he’s tough to catch.”

“Zach is a big center that skates very well – he is on top of you before you know it. His hard work and compete are very consistent, rarely does he take a shift off. Zach does a very good job killing penalties using his size and skating as a strength to take away time and space on the PK.”

“Brady is skilled, tenacious centre that competes every game and has a high hockey IQ. He’s a very good skater and makes his team go offensively. Brady is more of a pass first player and is probably the top playmaker in this age group. Brady sees the ice very well and is able to create opportunities for himself and his linemates. He is also strong on the draws and good defensively.”

“Ben is a big centre who can score goals and handles the puck well. He has good vision and uses his teammates effectively. Ben has a good hard shot that he can get
off quickly and accurately enabling him to become a very dangerous player when he’s within 15 feet of the net. Ben uses his points well when he has the puck in the corner.”

“Matthew has good size, skill and hockey sense. He reminds scouts of his brother Dylan at the same age. Matthew has a very good stick and is physically strong. He has a
good shot but tends to think pass first. He is very strong on the half wall on the powerplay and distributes the puck well, but isn’t afraid to take it to the net when he has the opportunity. Strome led the Toronto Marlboros to an OHL Cup title this year, scoring the overtime winner to push them past the Don Mills Flyers.”

“Markus is a skilled offensive defencemen that loves to have the puck on his stick. He plays in every situation for his team and really excels on the powerplay where he makes intelligent shooting and passing decisions from the blueline. He skates very well and has excellent mobility. Markus is able to beat the first forechecker and then make a solid outlet to one of his forwards. He performs well under pressure and has an accurate shot from the point.”

“Sasha is a very talented forward that possesses the skill set to bring people out of their seats. He does a very good job of protecting the puck and shows a willingness to
go to the tough areas to score goals. He sees the ice extremely well and is very unselfish with the puck. Sasha works hard away from the puck to not only retrieve it but to get open as well. He isthe type of player that makes everyone on the ice better. He has the skill, skating, and hockey sense to be a top forward.”

“Robbie is a tank on skates. He’s a good skater that is strong on his skates and is tough to knock off the puck. He is a physical player that punishes players along the boards but doesn’t go overboard and take penalties. He’s usually the first player into the corner and is very hard to control.”

“Greg is a skilled forward that is very good at all aspects of skating – speed, mobility, acceleration and agility. He can handle the puck with speed, execute dekes and fakes and handles the puck well in tight spaces. Greg has good hands and above average passing skills. He supports the puck well and usually picks the right player to move the puck to. Greg moves the puck with quickness and pace and plays the game at a high rate of speed.”

“Hayden is one of the top defencemen in this age group. He is a well rounded defender that skates well, has good mobility and an explosive stride. Hayden is very hard to beat one-on-one and makes opponents fight for every inch. He is very good positionally, reads and anticipates the play very well and is always on the right side of the puck. He plays very hard and rarely loses battles in the corners or in front of the net.”

“Nick has high end offensive capabilities, is very elusive with the puck on his stick and is hard to contain when he is moving his feet. He sees the ice well and is a very good playmaker with the ability to make many different type of passes. Nick has a very hard and accurate shot and when given the chance in the slot he usually doesn’t miss. Nick has all the tools and assets to be a productive player at the next level.”

“Isaac has the look of a prototypical power forward. He moves around the ice well and wreaks havoc on opposing defencemen off the forecheck. He has a very good skill set and is dangerous with the puck in the offensive zone as he is hard to handle due to his size and skating ability. Isaac is good around the net with the puck and is a threat in close on the net, especially on the powerplay.”

“Austen has a great skill set and the ability to create offense. He is his team’s go-to guy in every situation on both sides of the puck. He battles and competes for puck in all areas of the ice and is not afraid to take the puck to the dirty areas of the ice to create offence. Austen is a smart player with a high hockey IQ. He seems to have improved his foot speed and gotten quicker, posing more of a threat to defenders off the rush. He is a very smart player who seems to understand the game and where he should be on ice.”

“Evan is a versatile defender that does a lot of things very well. He is composed when he has the puck on his stick in all three zones and passes the puck accurately with either a hard, crisp pass or, if needed, a soft touch pass. Defensively he is quiet yet effective. He plays a controlled game and is usually on the right side of the puck. Evan isn’t overly physical but will take the body when needed. He is used in every situation and thrives on the powerplay with his skill set.”

“Brady is a great skater with the ability to slow the game down. He is a very heads up player coming up the ice and doesn’t shy away from carrying the puck into the zone. He makes good decisions when passing the puck and sees the ice extremely well. He uses his smarts defensively and is always on the right side of the puck. He’s not overly physical but plays more of a contain style of defence. He uses his skating, skill and hockey smarts to create offense every time he is on the ice.”

“Jacob is an exciting player to watch who challenges opponents with his speed and plays with an edge despite his small stature. He can get up to top gear quickly and utilizes his strong puck skills to beat opposing defenders off the rush. His vision on the ice is good and he uses his teammates well. He has a nice touch around the net and has scored some nice goals this season. He is very noticeable on the ice because of his tenacity and his skill.”

“Vanya is a smooth skating right wing who, despite his small frame, is strong on the puck. He is able to see the game develop and uses his terrific hockey sense to find outlets and create opportunities. Like another standout wearing the Otters uniform, he does a terrific job of drawing defenders to himself before dishing the puck to an open teammate. He rarely – if ever – loses puck possession for his team. He does a good job of finding quiet areas on the ice to get open and then uses an ultra quick release to beat the goaltender cleanly.”

“Jack is a strong skater who is able to play all three forward positions. He possesses good size and thrives in open ice areas. Jack has multiple shot types that make him a threat to score from the top of the circles down. He battles hard, winning loose pucks and doesn’t shy away from physicality. He is the younger brother of Ottawa 67’s centreman Sam Studnicka.”

“Liam is a player with all kinds of upside and potential. He has good size and a very good skill set. Liam can beat defenders one-on-one. Whenever he has the puck on his stick he is very dangerous and has the ability to dictate the pace. His posture allows him to be very good at all aspects of skating, speed, mobility, acceleration, and agility. He has great balance and is not easily moved off of the puck.”

Learn more about the next wave of OHL talent:

WATCH A REPLAY OF THE 2015 OHL PRIORITY SELECTION SHOW 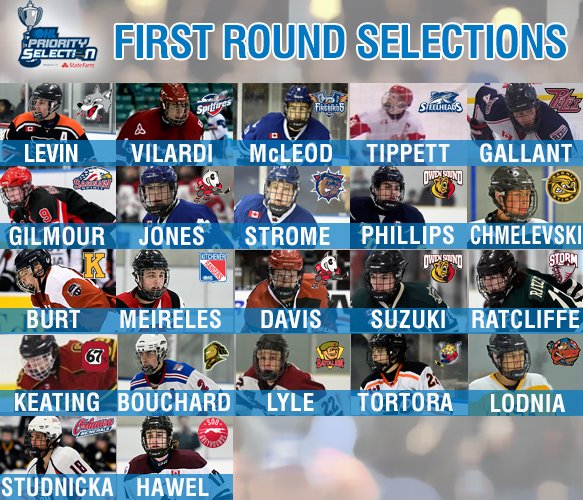 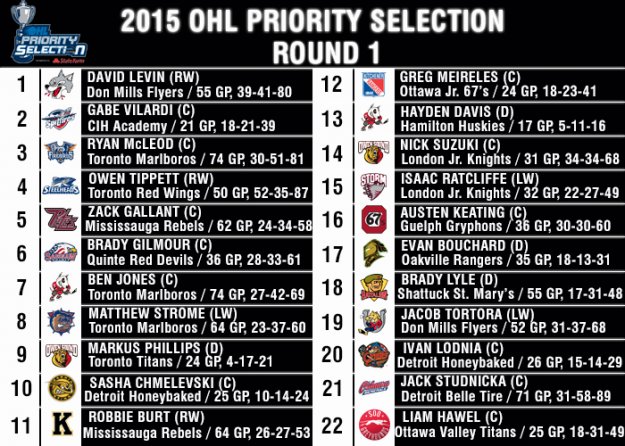 2021-22 Recaps
Friday Highlights: A look across the League
22 hours ago