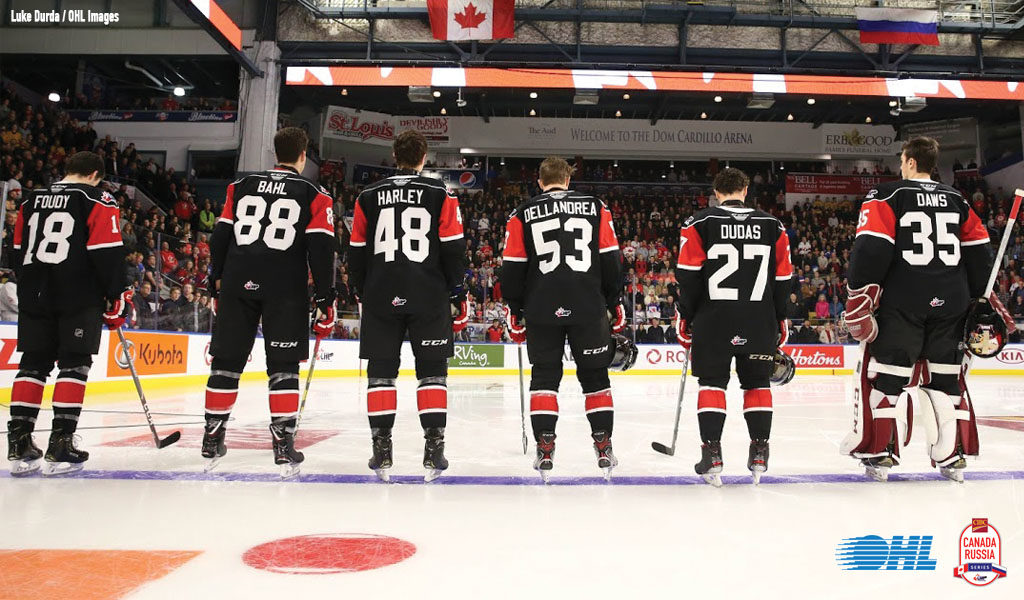 Following a dominant 4-1 win in Kitchener on Nov. 7, the OHL’s best concluded their run in the 2019 CIBC Canada Russia Series with a 3-2 shootout loss in London on Monday night. Here are 10 takeaways following Team OHL’s performance in both games:

STANDING TALL IN NET: Cedrick Andree and Nico Daws played even minutes on Nov. 7 in Kitchener, making an even 13 saves. Peterborough’s Hunter Jones was ecstatic upon finding out he’d be playing a full 60 minutes in Game 4. Despite a 3-1 shootout loss in London, Jones said he wasn’t disappointed in his performance. “I could have stopped a couple more in the shootout, but that’s hockey,” Jones said. ”I’m happy right now.” Of course, Jones has his eyes on that goaltending spot for Team Canada at the World Juniors, referring to these past two games as “exhibition games” leading up to the tournament at Christmas – “the one that really counts.” While there’s an obvious element of pressure that comes with wearing the Maple Leaf, especially as a goaltender, Jones used that added pressure to his advantage, receiving praise from his teammates. “It wouldn’t have been as close without him,” Niagara’s Philip Tomasino pointed out, “at moments, he kept us in the game.”

The man in maroon kicks out the right pad 👏@mnwild prospect @ShutoutsJones of @PetesOHLhockey comes up big to end the second period. @cibc #CANvsRUS 🇨🇦🇷🇺 pic.twitter.com/VKHOT2WuvD

OFFENSIVE CAPABILITIES ON DISPLAY: While it goes without saying that a strong offense was something to be expected from the OHL’s best of the best, Serron Noel’s offensive capabilities notably stood out. The Florida Panthers draft pick’s speed and jump were on full display, and his goal in the third period to put his team up 2-1 lit a much-needed fire under the team’s energy, especially having taken a double-minor high stick penalty at the end of the second period – an opportunity that Russia took advantage of to round out the scoring at 1-1 early in the third. Noel saw opportunity and was in the right spot to respond. At the end of the tournament, he said scoring that goal was “something he needed to do.”

CONTENT WITH PENALTY KILL: A strong penalty kill was an obvious key to shutting down Russia’s speed heading into both games, and especially heading into Game 4 with a hungry, well-rested Russian team looking to bounce back from a 4-1 loss. While Team OHL was unable to capitalize on their powerplay chances, even allowing a shorthanded goal midway through the third, the guys seemed content with their PK performance. Declan Chisholm of the Peterborough Petes pointed out that being reliable in the D-zone was what he was hoping to bring to the roster most.

SPEED: Team OHL had to undoubtedly be quick on their skates if they wanted to match a quick veteran Russian team. Their domination in Game 3 and ability to keep Russia to a tight match in Game 4 proved their ability to keep up with their opponent’s speed. “Obviously they’re a big and strong team, so we used our speed to our advantage and played them on the forecheck. That was one of our main identities,” Tomasino pointed out, following their 3-2 shootout loss on Monday night. “We did a good job considering we’d only played that team once.”

DRAFT HOPEFULS: Team OHL’s young quartet of NHL Draft eligibles – Quinton Byfield, Cole Perfetti, Jamie Drysdale and Ryan O’Rourke – looked solid in front of a veteran Russian team. All four are on the radar for the 2020 NHL Draft and Coach Hunter pointed out that they held their own in Game 3 against a big, strong Russian squad. Perfetti picked up a goal in Game 3 and was the only successful shooter in Game 4’s shootout, while Drysdale earned an exceptional amount of ice time.

CHEMISTRY: “You can’t always expect to be a top 6 forward and prove to Mark and Dale that we can play wherever they want to put us,” said Connor McMichael, one of three London Knights on the roster and playing under a familiar coaching staff that includes Dale and Dylan Hunter. Noel complimented his chemistry with McMichael and Perfetti. “We got it pretty early and we had a lot of heavy shifts, making plays and finding each other.” Coach Dale Hunter was keen on putting guys together to see how they connect in different situations. Testing their chemistry in powerplay, penalty kill, and penalty shot situations, among others, was a priority of his. Following both results, Hunter says he was able to see what he wanted to see out of his team.

PHYSICALITY: Playing a physical game was a priority heading into Game 4, having tested the Russians’ strong game earlier that week. On whether or not the team was able to execute what appeared to be a mutual game plan, Noel said he was happy with the team’s physicality. “We had a lot of heavy shifts and held the puck down low and made some plays. We executed that plan pretty good.” Heading into Game 4, Chisholm mentioned he wanted to play a physical game with quick, fast breakouts and good connection.

NO REST NEEDED: Grouping together the best of the OHL presents an opportunity to evaluate how they fare in high pressure situations. Most of the guys had played over the weekend which, as Coach Hunter pointed out following Game 4, was part of the test. If the team was tired, they didn’t show it, especially against a well-rested Russian group.

Get to know Team @OHLHockey 🇨🇦📸

A look at all 20 players representing 14 teams at @cibc #CANvsRUS.

CONFIDENCE IN FAMILIAR FACES: It’s always helpful when familiar teammates have your back. Serron Noel was happy to have Oshawa Generals teammate Allan McShane join him in Game 4. “It’s always exciting to play with guys you’re familiar with,” he pointed out. “It’s nice to have Allan McShane and I go through this together.” The squad’s three London Knights – McMichael, Ryan Merkley, and Liam Foudy – shared a similar sentiment, pointing out home ice advantage makes things a little easier. “It’s always great when you get to play with best friends.” It goes without saying that the London connection shone through in Game 4 with a big redirect goal from teammate Ryan Merkley in front of a home crowd to put Team OHL on the board in the first twenty minutes.

The 2019 CIBC Canada Russia Series continues this week as the Western Hockey League inherits a 6-6 series, taking on Russia in Saskatoon and Prince Albert. For full coverage visit chlcanadarussia.ca.