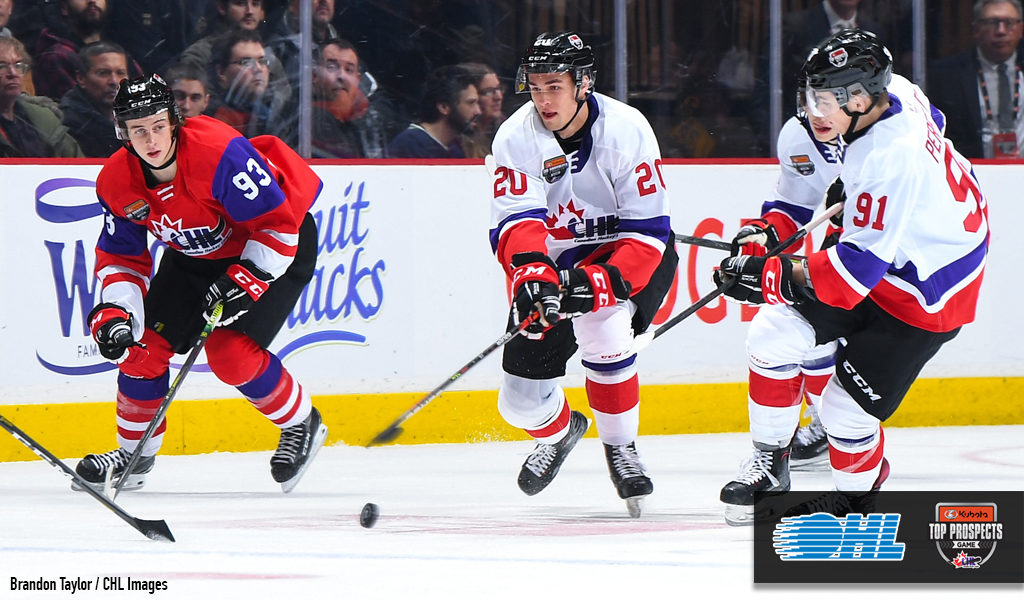 Team White reigned victorious by a score of 5-2 at the 2020 Kubota CHL/NHL Top Prospects Game in Hamilton. The event provided a good exhibit of talent and spirit from the participating OHL skaters in terms of the on-ice product and the overall experience itself. Here are 10 takeaways from the showcase that was:

Brandon Coe has it figured out
Following morning skate, Team White’s Brandon Coe made a point of stressing how much he wanted to put his speed and vision to good use. He emphasized his 6-foot-4 stature and admitted his ability to see the ice can give him an advantage. By all accounts, he was able to make an impression. The North Bay Battalion winger drove to the net, used his size to finish some hits, made solid plays, and wound up on the scoresheet with a helper on Kaiden Guhle’s early tying goal. Following his performance in Hamilton, NHL Director of Central Scouting Dan Marr described him “as one of the players that the scouts are trying to figure out,” and mentioned that Coe’s confidence shone through.

Ryan O’Rourke remains cool and collected
The Soo Greyhounds have a strong two-way defenceman in Ryan O’Rourke. His performance with Team White was no different.

O’Rourke has been touted as a guy that can be used in all situations. He isn’t necessarily flashy, but he stands out so far as he knows when to get the job done.

But perhaps what stood out most about the physical, big moving defenceman was his calmness. At the conclusion of the game, Marr pointed out O’Rourke’s impressive poise and presence under pressure that continuously allows him to both make and execute on plays.

Team White’s compete level
When asked about Coach George Burnett’s game plan heading into the game, the mantra read short and sweet: outwork the other team. A confident Tyson Foerster acknowledged his team did just that: outworked their friendly opponent on every shift. And when the likes of Jeremie Poirier and Jack Quinn found the back of the net early, they bounced back and worked harder.

“Establish the forecheck. Wear them down.” That’s how O’Rourke described the key to winning the game.

They definitely got the jump on the opposition.

Foerster elevates his game
Fans and scouts were treated to a lot out of Tyson Foerster. His ability to finish big plays was on display, as well as his ability to stay open in position. His confidence with and without the puck translated.

When asked about what worked, he humbly touched on the chemistry. He praised linemate Connor Zary’s skill, smarts, and grittiness. He gave a nod to his smart passes.

“Tonight I think for [Foerster], if any scouts wanted to question any part of his game, I think the questions were taken away,” said Marr of Foerster’s impact.

The Barrie Colt centreman put up two goals and an assist for Team White. Perhaps he summed it up best when he ended his postgame scrum by saying he’s sure he’s made Mr. Dale Hawerchuk proud with his performance.

The Ottawa chemistry continued to click
Put Jack Quinn and Marco Rossi on a line together and you know you’ll see a force to be reckoned with.

It’s a connection that Coach Rob Wilson sees a lot from behind the Peterborough bench. This time, as head coach of Team Red, he was able to witness their chemistry from a different perspective.

The two Ottawa playmakers took to the ice as linemates, and their combined offensive effort that included Sarnia’s Jacob Perreault accounted for a Jack Quinn goal and a brief lead in Team Red’s favour.

Quinn was named Team Red’s Jim Gregory Player of the Game, an honour that paid homage to the late hockey ambassador.

Perreault fitting right in
Upon being asked about the identity he was hoping to establish, Jacob Perreault made mention of his power forward-esque speed. But the Sarnia Sting centreman didn’t shy away from alluding to the nerves that crept in heading into the game, and with regards to what he was hoping to get out of the shared top prospects experience, he stated it was most important to him to just be able to fit in with the guys.

Perreault’s role was an interesting one in that he was put on a line with two teammates. And not just any teammates, but a couple of products of the CHL’s top ranked team. But it’s a role that was bound to work. Playing alongside two of the OHL’s top scorers who already share an established chemistry seemed to be a good way to settle in.

No doubt the chemistry rubbed off on him. The high end offensive forward fit in nicely with the two Barber Pole skaters.

“I wasn’t surprised with what they could do,” he said of his linemates following Thursday’s game. “The chemistry rubs right off on you. I just wanted to contribute.”

The line came alive, and contribute he did.

Rob was impressed, both on and off the ice
Coach Wilson was adamant about treating the game like the showcase it is and approaching the game loosely with regards to a game plan. That meant not picking apart too many lines or powerplay units.

“I wanted to give them all a fair shake,” said Wilson. “They were happy about that.”

He made sure to stress that the focus is on competing high and showcasing yourself. After all was said and done, he commended the players on their professionalism, especially since, as he put it, “they have a lot going on” en route to the NHL Draft in June.

“They’re just young. Sometimes we forget that,” he said. “I’ve really enjoyed spending time with all of them.”

The high tempo hockey level
If Rob wanted a competitive game, he certainly got it. Thursday’s game saw a fast pace, no shortage of hard hits, and real faceoff battles. Antonio Stranges of the London Knights described the level of hockey as “high tempo” and emphasized all the hard passing.

“It was competitive and fast right from the start,” said O’Rourke. “Lots of hard hits.”

Drysdale’s explosive skating made a mark
If his game time performance wasn’t already a testament to his electrifying skating ability, it’s worth pointing out again that Jamie Drysdale finished in the top three for more than one category in the on-ice testing combine. Both backward skate sessions saw the Erie Otters D-man finish first, and he landed third for the 30M Forward Skate with Puck.

When posed with the expectation to showcase his strengths and skills in the span of two days, there were no surprises with regards to Drysdale’s explosive skating.

Perfetti remembers to have fun
Earlier in the week, Cole Perfetti spoke to the camaraderie that comes with taking in the Top Prospects experience altogether.

He spoke to Quinton Byfield’s skill. He praised Jamie Drysdale’s skating. He brought up how exciting it is to be able to play with Foerster and O’Rourke, guys he’s grown up playing minor hockey with that have since become his opponents.

He then spoke to the advice he received from new teammate Ryan Suzuki, who played in last year’s game:

“[Suzuki said] it’s not the end of the world if you don’t play great or make an impact right away,” he said. “Just being named to the team is a big deal in of itself. He said it’s going to be fun.”

Perfetti sealed his team’s win with an unassisted empty-netter as the game’s final minutes counted down, rounding out a two-point night. He embodied the best of both worlds: he had fun and made an impact.