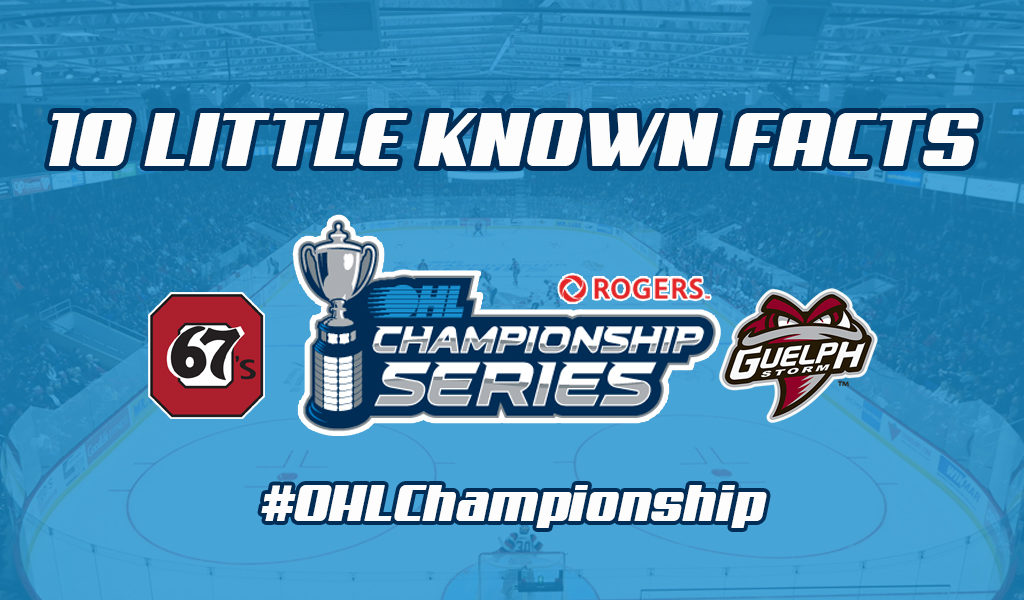 The Rogers OHL Championship Series is at the midway mark with the Ottawa 67’s and the Guelph Storm tied 2-2 through four games.

The series is destined to go at least six which makes for just the ninth time since the two conference format was introduced in 1999 where the final is pushed beyond five.

2011 was the last instance where a team won the first two games only to see their opponent win the next two.  Back then it was the Mississauga St. Michael’s Majors who grabbed the early edge before the Owen Sound Attack battled back.  The Majors won Game 5 before the Attack won the last two to capture their first OHL title.

The Ottawa 67’s set a new OHL record with their 14th consecutive victory in Game 2 of the Rogers OHL Championship Series. Interestingly enough, they’re the first team to enter the League Final with an undefeated record since the 1998 Guelph Storm reached the Championship Series with an 8-0 record before besting the 67’s in five games that season.

2. Beasts from the East:

3: Fourth seed’s rise to the Final:

The Guelph Storm entered post-season play as the Western Conference’s fourth seed.  They’ve already become the first team with such a ranking to win the Wayne Gretzky Trophy and would find themselves in elite company with another series win.  Oddly enough, the last fourth place team to win the Robertson Cup was the 2001 67’s following a 33 win season.  Other teams that come close include the 2016 Niagara IceDogs who reached the final as a fourth seed representing the East, and the 2007 Sudbury Wolves who pushed their way to playoff’s end following a sixth place regular season finish.  The 2005 67’s were also a fourth place team before falling to the London Knights.  The 1999 Knights, who lost to the Belleville Bulls in seven games, were a fifth place team out of the West.

The Storm are on pace to play no less than 24 post-season games should the series end in six.  25 if it goes seven.  The 2000 Barrie Colts are the benchmark of OHL playoff endurance having played 25 games to capture their first title.  That season they beat North Bay in six, Sudbury in seven, Belleville in five, and Plymouth in seven.  Their magical run ended at the Memorial Cup, also played that season in Halifax, losing in the final to the Rimouski Oceanic. The 2004 Mississauga IceDogs and 1999 London Knights also played in 25 games, but came up short in the League Final.

Three players in Guelph’s MacKenzie Entwistle and Jack Hanley along with Ottawa’s Kyle Maksimovich have had their names engraved on three of the OHL’s championship trophies. After winning an OHL Championship with regular season champion Hamilton last spring, Entwistle and Hanley are on both the Bobby Orr and Wayne Gretzky Trophies as well as the J. Ross Robertson Cup. Maksimovich was a member of the 2017 League champion Erie Otters, also etching his name into the Wayne Gretzky and Bobby Orr Trophies as well as the Hamilton Spectator Trophy on three different occasions. Perhaps the most impressive recent example of career success is Erie Otters graduate Anthony Cirelli, who won two OHL titles, both Conference championships, a Hamilton Spectator Trophy in addition to a Memorial Cup.

Though he’s been sidelined with an injury of late, Ottawa 67’s goaltender Michael DiPietro played a big role in backstopping his club to the Rogers OHL Championship Series. Up until this season, DiPietro, who was a Memorial Cup champion with the Windsor Spitfires in 2017, hadn’t won an OHL Playoff round. He’s in a position to potentially join a small handful of players that won a Memorial Cup before they ever won an OHL Championship. The latest group to do so includes members of the 2001 Ottawa 67’s in Miguel Delisle, Lance Galbraith, Zenon Konopka, Seamus Kotyk, Luke Sellars, Jeremy Van Hoof and Jon Zion. Those seven were members of the 1999 Memorial Cup champion 67’s who captured the national title on home ice despite losing in the Eastern Conference Final of the ’99 OHL Playoffs.

Ottawa 67’s rookie Marco Rossi has had quite a playoff showing, leading all first-year players with 20 points (6-14–20) over 15 contests. He isn’t the first Austrian player to compete in the Ontario Hockey League, but he would be the first to have his name engraved on the J. Ross Robertson Cup should the 67’s prevail over the Guelph Storm. Rossi, who isn’t eligible for the NHL Draft until 2020, has proven to be a total package player for Andre Tourigny’s club.

The Belleville Bulls have one final representative competing in the Ontario Hockey League. Well-travelled Guelph Storm defenceman Jack Hanley is trying to add a second OHL Championship to his five-year resume. The Whitby, Ont. native got thing started in Belleville as the Bulls’ fourth round pick in 2014. He played 45 games in the club’s final season before spending three years in Hamilton that culminated in an OHL title last spring. Former Bulls teammates in Brandon Saigeon (Oshawa Generals) and Cole Candella (Sudbury Wolves) completed their OHL careers this past month.

9. Best on best behind the bench:

Andre Tourigny was voted the 2019 recipient of the Matt Leyden Trophy for OHL Coach of the Year.  He’s opposite George Burnett who won in back-to-back years with the Niagara Falls Thunder in 1991-92.  The last time two coaches with such distinction went head-to-head in an OHL final was back in 2008 when Burnett’s Belleville Bulls met Peter DeBoer’s Kitchener Rangers. DeBoer never won the award with the blueshirts but was a back-to-back winner for the Plymouth Whalers in 1999-2000.  2005’s final between the London Knights and Ottawa 67’s also featured Coach of the Year winners in Dale Hunter and Brian Kilrea.

With two veteran teams, players across the respective rosters of the Guelph Storm and Ottawa 67’s can make numerous connections to other member teams in the 20-team circuit. Here are a few of those.