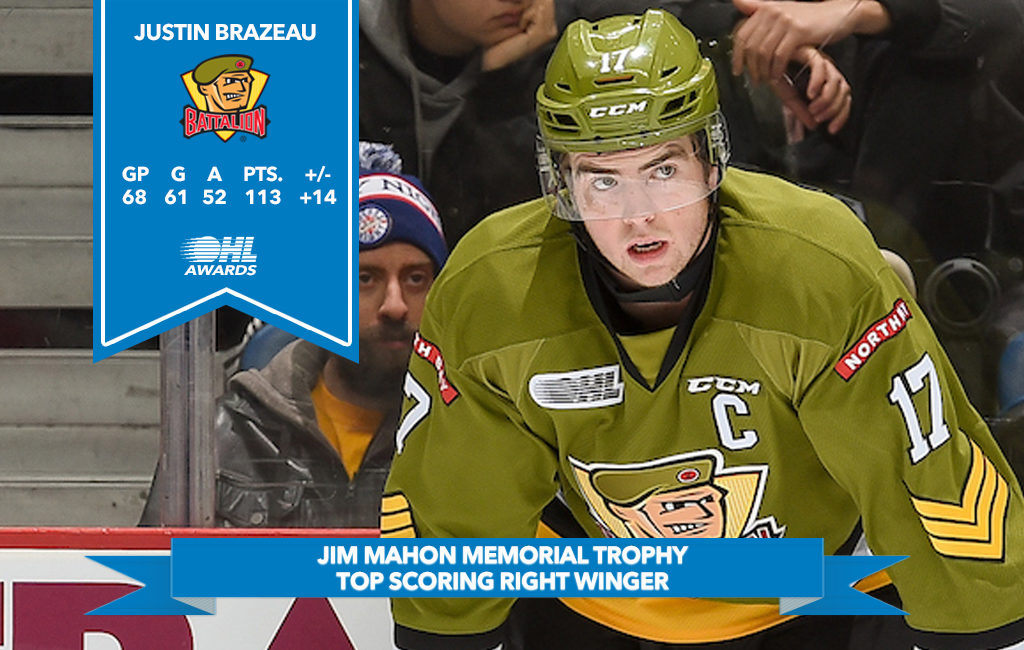 Justin Brazeau finished second in OHL scoring but led all right wingers with 113 points including a league-high 61 goals along with 52 assists in 68 games.

The 21-year-old from New Liskeard, Ont., set a new Battalion mark for goals in a season and is one of just three North Bay OHL stars to surpass the 60 goal plateau joining former Centennials Vitali Yachmenev who scored 61 in 1993-94, and Nick Kypreos who netted 62 during the 1985-86 season.  Brazeau became just the second Battalion player to join the OHL’s century club for points in a season following Wojtek Wolski who produced 128 points in 2005-06.  It’s also the first time North Bay fans have seen a 100-point player since Trevor Gallant accomplished the feat by putting up 105 points for the Centennials in 1995-96.

Brazeau’s season was highlighted by 33 multi-point performances including five hat-tricks and an OHL best seven-point outing on October 21.  The 13th round pick by the Battalion in the 2014 OHL Priority Selection finishes his OHL career with 128 goals and 238 points which are the most by any player to suit up for the Troops since they relocated to North Bay in 2013-14.  His 128 goals are second behind Wolski (130) on the club’s all-time goal scoring list.

The Jim Mahon Trophy was first presented following the 1971-72 season by the players and management of the Peterborough Petes in memory of their right winger Jim Mahon who was accidentally killed that summer.  Brazeau becomes the second Battalion player to receive the honour following John Hughes who recorded 91 points in 68 games during the 2007-08 season.  Jordan Kyrou of the Sarnia Sting was last year’s recipient with 109 points in 56 games scoring 39 goals with 70 assists.  Recent winners also include Alex DeBrincat of the Erie Otters in 2017, Kevin Labanc of the Barrie Colts in 2016, and Mitch Marner of the London Knights in 2015.