OHL ‘On the Run’ Player of the Week: Evan Bouchard 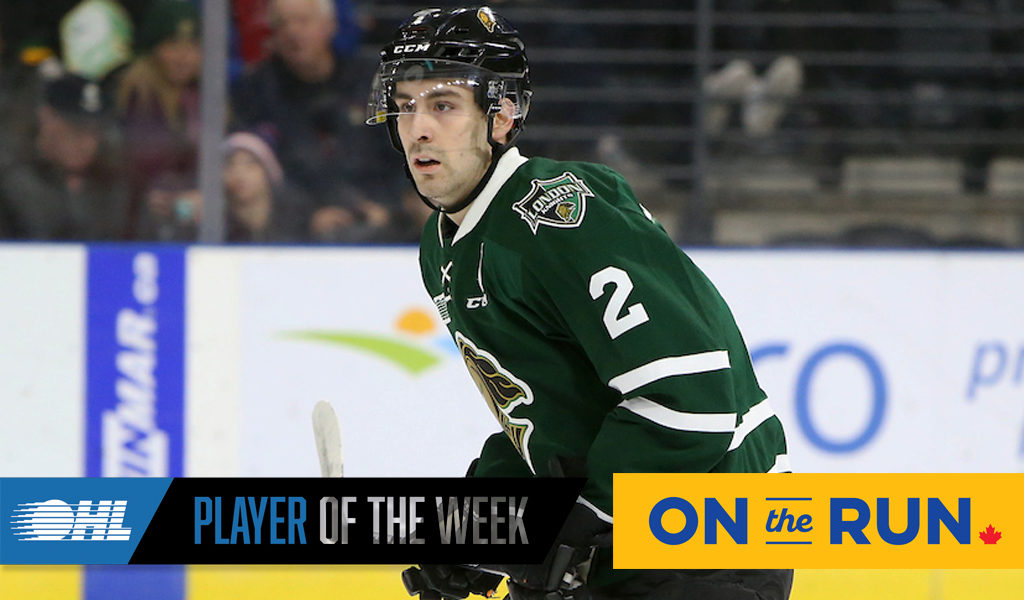 Toronto, ON – The Ontario Hockey League today announced that Edmonton Oilers prospect Evan Bouchard of the London Knights is the OHL ‘On the Run’ Player of the Week for the first week of playoff action ending March 24 with seven points in two games including two goals and five assists along with a plus-minus rating of plus-3.

Bouchard led the league in scoring over the first weekend of post-season action for the Western Conference’s first place Knights powered by a pair of multi-point performances to start their quest for an OHL title with home ice wins over the Windsor Spitfires.  In Game 1 on Friday night Bouchard matched a season high with four points by scoring twice at even strength and adding two assists on the power play as first star of the 4-3 victory.  He then contributed three assists in Game 2 on Sunday earning third star honours in the 5-0 shutout win.  The first round series shifts to Windsor for Game’s 3 and 4 on Tuesday and Thursday night.

A 19-year-old from Oakville, Ont., Bouchard becomes the first defenceman to earn the league’s weekly award in 2018-19.  The Knights captain is playing in his fourth season with the club after being chosen in the first round of the 2015 OHL Priority Selection.  Despite playing in just 45 regular season games this year he produced 53 points including 16 goals and 37 assists finishing with the league’s second best points-per-game average among defencemen at 1.18.  The first round pick by the Oilers in the 2018 NHL Draft eclipsed the 200 point plateau for his OHL career during his final regular season outing also capping a March where he was named OHL Defenceman of the Month.  He finishes his four-year tenure in London with 54 goals and 147 assists for 201 points in 223 games.

Watch video highlights of Bouchard and the Knights against the Spitfires in Game 1 and Game 2.

Also considered for the award this week was Florida Panthers prospect Owen Tippett of the Saginaw Spirit who scored three goals and three assists for six points in two wins against the Sarnia Sting, and NHL Draft prospect Graeme Clarke of the Ottawa 67’s who scored five goals across a pair of wins against the Hamilton Bulldogs.  In goal, Boston Bruins prospect Kyle Keyser of the Oshawa Generals posted a 2-0 record in first round action against the Peterborough Petes which included one shutout while making a total of 58 saves for a goals-against-average of 1.00 and save percentage of .967.