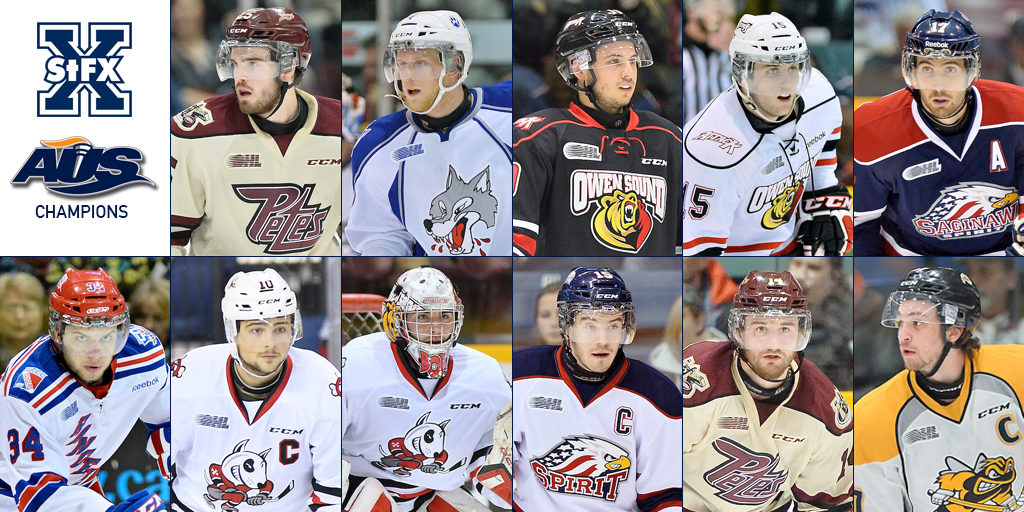 StFX’s second consecutive AUS title was capped off by a 5-4 home ice win on Tuesday as Michael Clarke (Peterborough Petes) scored the eventual game winner 12:59 into the third period. The X-Men overcame a 3-1 deficit with a three-goal second period to pull ahead for good.

“It was a gritty effort—being down two goals and coming back to score three to take the lead,” X-Men captain Eric Locke (Saginaw Spirit) said during the on-ice celebration.

“They have a great team, but we just wanted it. We won it last year; we know what it feels like—it is so great—and we wanted that feeling again this season.”

The X-Men skated to a third place finish in the AUS this past season, finishing the campaign with a 16-12-2 record behind first place UNB and second place Acadia. They proceeded to go 7-0 in the postseason, eliminating Moncton, Acadia and UNB in the process.

StFX also defeated UNB in last year’s AUS Championship Series before the Varsity Reds got their revenge in the U SPORTS University Cup Final, skating to a 3-1 victory to win it all.

The StFX X-Men, UNB Varsity Reds and Acadia Axemen will all advance to the U SPORTS University Cup set to take place from March 16-19 at the Aitken Centre in Fredericton, NB.