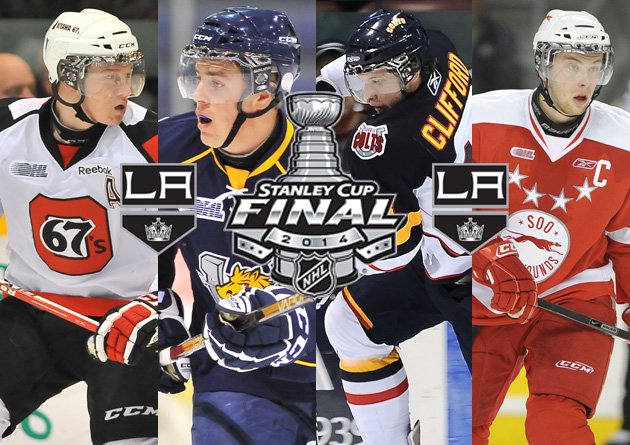 “It’s such a team thing, I couldn’t be more proud of what we went through to get here,” said Williams. “2012 went a little smoother, this one was all work and all heart. You win it for all your teammates but you win it for everyone who’s been cheering for you your whole life too.”

The Kings came from behind in three of their four victories against the Rangers winning all three in overtime.  They also showed their resiliency leading up to the final erasing a 3-0 series deficit in the first round against the San Jose Sharks, then won Games 6 and 7 against the Anaheim Ducks in the second round before winning Game 7 on the road against the Chicago Blackhawks in the Western Conference Final.

“It’s about 20 guys digging down deep and finding a way to get it done,” said Kings captain and former Guelph Storm Dustin Brown. “In a run like this it’s really not about big goals it’s about how we came together at important times, those are the memories at the end of the day.”

Among the three OHL graduates to hoist the Stanley Cup for the first time include former Soo Greyhound Jake Muzzin, and most recent graduates Tanner Pearson of the Barrie Colts and Tyler Toffoli of the Ottawa 67’s who both finished their major junior careers in 2012.

“Last year I got a little taste (of the NHL), it was tough this year but I finally got my chance and I ran with it and here we are tonight,” said Toffoli, a two-time OHL 50-goal scorer. “Our team is incredible, the leadership up and down the lineup, everyone just working hard even when we are down we just keep going and going.”

Toffoli, originally a second round pick in 2010, led all rookies in playoff scoring with 14 points in 26 games including an assist on the Stanley Cup winning goal.  He finished two points ahead of Pearson who joined the Kings organization after being selected as a 19-year-old in the first round of the 2012 NHL Draft.

“If you would have asked me six years ago (about winning the Stanley Cup) I probably wouldn’t believe you,” said Pearson who was a 14th round pick in the 2008 OHL Priority Selection. “To get this opportunity to lift that Cup is definitely a dream come true. I knew it was going to be hard to crack the lineup this year but these guys made it such an easy transition for me and I couldn’t ask for a better group.  I’m going to remember this for the rest of my life.”

The win caps off a dream season of both a Stanley Cup ring and Olympic Gold Medal for former Greyhound Jeff Carter and former Storm Drew Doughty.  During his OHL career Carter was the league’s Most Sportsmanlike Player in 2005, and Doughty won a Max Kaminsky Trophy as the league’s Most Outstanding Defenceman in 2008, an award also shared by his Kings’ defence partner Muzzin who received the honour in 2010.

Other award winners include Toffoli who shared the league’s Eddie Powers Memorial Trophy as Top Scorer in 2011, and Brown who was the league’s Scholastic Player of the Year three straight seasons from 2001-03.

The 11 league alumni combined to play 2,070 OHL regular season games recording 1,893 points led by Jordan Nolan’s 268 games between the Erie Otters, Windsor Spitfires, and Greyhounds between 2005-10, and Toffoli’s 333 career points including 163 goals between 2008-12.  The group also combined to play 252 career OHL playoff games with 235 points led by former Kitchener Ranger Mike Richards with 56 points in 41 games and the only member of the Kings to also hoist the Robertson Cup and Memorial Cup both in 2003.

In addition to the players, Kings’ assistant coach John Stevens is also an OHL graduate as a member of the Oshawa Generals between 1983-86, while the club’s Director of Amateur Scouting Michael Futa was the OHL’s Executive of the Year in 2005 with the Owen Sound Attack.

The 2014 Stanley Cup Finals featured a total of 19 former OHL players with eight league graduates competing on the Rangers.

Most recent OHL team and season in brackets