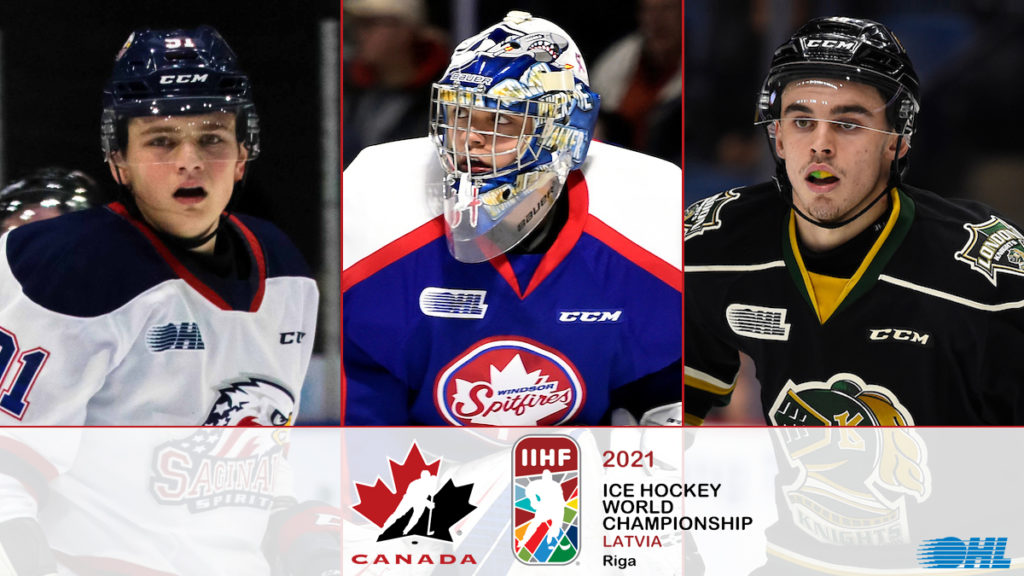 Hockey Canada announced Friday its 25-man roster for the 2021 IIHF World Hockey Championship set to take place from May 21-June 6 in Riga, Latvia.

Among the three goaltenders, eight defensemen and 14 forwards headed overseas are 11 past and present OHL players. The list is highlighted by Saginaw Spirit forward and reigning OHL Scholastic Player of the Year Cole Perfetti who has spent the 2020-21 season with the AHL’s Manitoba Moose. Recent OHL graduates include 2018 Goaltender of the Year Michael DiPietro of the Vancouver Canucks as well as Columbus Blue Jackets forward Liam Foudy.

PAST AND PRESENT OHL PLAYERS ON CANADA’S NATIONAL MEN’S TEAM:

*-eligible to return for 2021-22 OHL season
**-injured, will not compete
^- played in OHL during 2019-20 season
#-represented Canada at IIHF World Junior Hockey Championship

“Hockey Canada is excited to announce the 25 players that have been selected to wear the Maple Leaf at the 2021 IIHF World Championship. We know the players and staff will represent Canada with pride as they compete for a gold medal in Latvia,” said Luongo. “Our roster combines veteran leadership with a lot of young talent, and we are excited for a number of players who have the opportunity to represent their country for the first time.”

Prior to travelling to Riga on May 15, players and staff were required to self-isolate or follow their league COVID-19 protocols as of May 10 and will be tested for COVID-19 three times. Upon arrival in Latvia, all team personnel will enter a three-day quarantine at the hotel before entering a team quarantine on May 18.

Canada opens the 2021 IIHF World Championship on Friday, May 21 at Arena Riga against host Latvia with preliminary-round games through Tuesday, June 1. Canada will also face Finland, Germany, Italy, Kazakhstan, Norway and the United States in the preliminary round before the tournament wraps up with the bronze and gold medal games on Sunday, June 6. TSN and RDS, the official broadcast partners of Hockey Canada, will broadcast all 64 tournament games; please check local listings for details.

Since 1931, Canada has won the world championship 20 times – not counting the years when Olympic Winter Games gold medallists were also considered world champions. Canada has also collected 13 silver medals and seven bronze. Canada last won silver at the most recent event in 2019 after claiming gold in back-to-back years in 2015 and 2016.