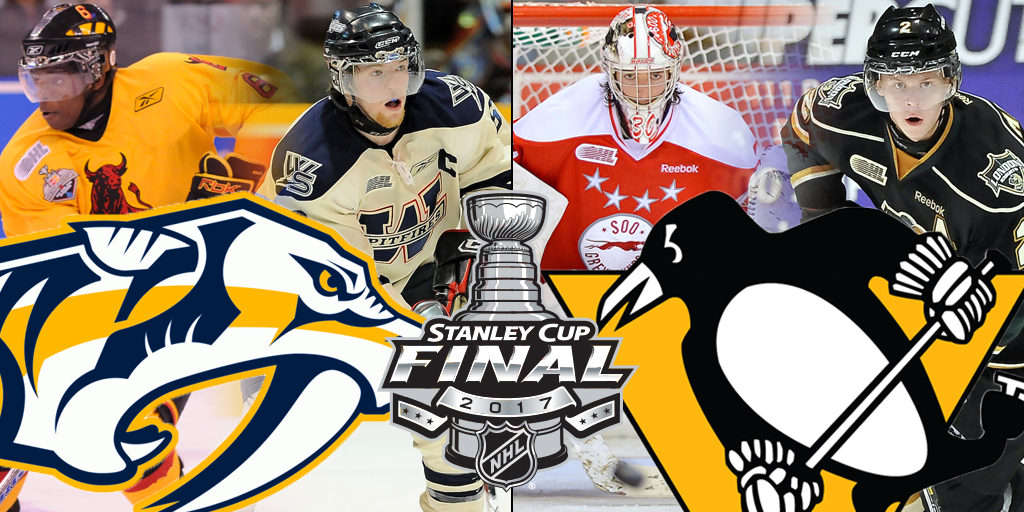 A total of 14 OHL graduates, eight from the Pittsburgh Penguins and six from the Nashville Predators, will battle in the 2017 Stanley Cup Final of the NHL Playoffs.

The Western Conference champion Predators advanced to their ever first Stanley Cup Final following a series win over the Anaheim Ducks. Nashville has had strong OHL alumni contributions from defencemen Ryan Ellis (Windsor Spitfires) and P.K. Subban (Belleville Bulls) while forwards James Neal (Plymouth Whalers) and Austin Watson (London Knights) have also factored into the team’s success. Predators captain Mike Fisher (Sudbury Wolves) has been limited by injuries of late while defenceman Yannick Weber (Kitchener Rangers) has skated in all 16 of the club’s playoff contests.

OHL products contributing to Pittsburgh’s playoff run have included goaltender Matt Murray (Sault Ste. Marie Greyhounds) who returned from injury to lead his club into the Stanley Cup Final. Defencemen Olli Maatta (London Knights) and Trevor Daley (Sault Ste. Marie Greyhounds) have also had a part in the success while forward Tom Kuhnhackl (Niagara IceDogs) has been in and out of the lineup.

The Penguins took Game 1 of the series by a score of 5-3 on Monday. Game 2 is set for Wednesday night back in Pittsburgh.

94 OHL grads began the journey to hoisting the Stanley Cup back in mid-April.