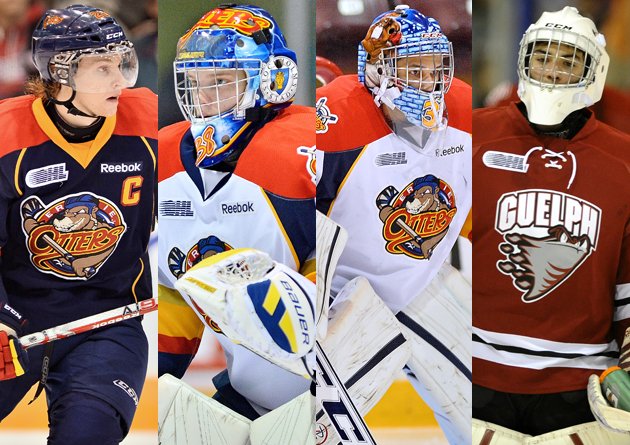 Toronto, ON – The Ontario Hockey League today announced the recipients of four of the league’s annual awards following the conclusion of the 2013-14 regular season.

Toronto Maple Leafs prospect Connor Brown of the Erie Otters earns both offensive awards including the Eddie Powers Memorial Trophy presented to the league’s Top Scorer and also claims the Jim Mahon Memorial Trophy presented to the Top Scoring Right Winger.  The other two awards are for defensive efforts including the Dave Pinkney Trophy for the goaltending tandem of the team with the fewest goals against won by Columbus Blue Jackets prospect Oscar Dansk and NHL Draft prospect Devin Williams of the Erie Otters, while the F.W “Dinty” Moore Trophy awarded to the rookie with the best goals-against-average was won by NHL Draft prospect Matthew Mancina of the Guelph Storm.

Connor Brown scored 45 goals and 83 assists for 128 points in 68 games to become the first player in Erie Otters franchise history to win the OHL scoring title.

Brown, a 20-year-old from Toronto, ON, is playing in his third OHL season with the Otters and was a sixth round selection of the Toronto Maple Leafs in the 2012 NHL Draft.  The right winger’s performance on the power play was top among all OHL players leading the league with 20 goals and 34 assists with the man advantage while producing 39 multi-point games this season.

The Eddie Powers Memorial Trophy was donated by the Toronto Marlboro Athletic Club in memory of Eddie Powers and was first awarded in 1945-46 to Tod Sloan of St. Michael’s who scored 79 points in 25 games.  Last season the award was won by Vincent Trocheck of the Plymouth Whalers with 109 points in 63 games including 50 goals and 59 assists.  Other notable winners include Taylor Hall and Tyler Seguin who tied for the league’s scoring title in 2010, John Tavares (2009), Patrick Kane (2007), and Corey Perry (2005).

The Jim Mahon Trophy was first presented following the 1971-72 season by the players and management of the Peterborough Petes in memory of their right winger Jim Mahon who was accidentally killed that summer.  Brown is also the first member of the Otters to win this award following Seth Griffith of the London Knights who was last year’s recipient.

For the first time in franchise history the Erie Otters allowed the fewest goals in the OHL with just 170 against, backstopped by the tandem of Oscar Dansk and Devin Williams.

The Dave Pinkney Trophy is awarded annually to the goaltending tandem from the team that allows the fewest goals against during the regular season.  Last season, the Owen Sound Attack allowed just 165 goals against with Jordan Binnington and Brandon Hope between the pipes.

Dansk, a 20-year-old native of Sweden is playing in his second OHL season with the Otters.  Selected by the Blue Jackets in the second round of the 2012 NHL Draft, Dansk led the league with a goals-against-average of 2.39 also posting a save percentage of .909 and tied for the league lead with six shutouts.  He also posted a record of 29-9-1-0 for the Otters who set franchise records for wins and points in a season.  Williams, an 18-year-old from Saginaw, Michigan, is playing in his third OHL season with the Otters and posted a 23-5-1-0 record including five shutout victories.  The NHL Draft prospect, listed 14th among North American goaltenders by NHL Central Scouting, finished tied for fifth in the league with a goals-against-average of 2.57 and also held a .905 save percentage this season.

Matthew Mancina of the Guelph Storm had the best goals-against-average among OHL rookie goaltenders with a mark of 2.43 this season.

The trophy is named after F.W. “Dinty” Moore of Port Colborne, ON, who served as OHA President from 1942-45.  In order to qualify for this rookie award, a goaltender must play a minimum of 900 minutes.  Mancina becomes the second member of the Storm to win the award following Brett Thompson who posted a 3.09 mark during the 1995-96 season.  Fellow NHL Draft prospect Alex Nedeljkovic of the Plymouth Whalers won the award last season with a 2.28 goals-against-average.

Mancina, a 17-year-old from Tecumseh, ON, was listed 18th among North American goaltenders by NHL Central Scouting for the 2014 NHL Draft.  This season he posted a record of 17-5-1-2 for the Storm recording three shutouts.  His goals-against-average ranks second overall in the OHL while his .919 save percentage is the league’s fourth best.

The 2014 OHL Playoffs begin on Thursday March 20, visit www.ontariohockeyleague.com for all first round matchups and schedules.