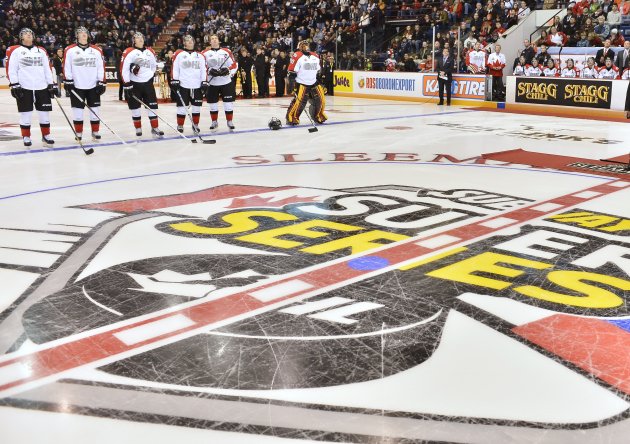 The SUBWAY® Super Series has been an integral part of the identification process for Team Canada for the past 10 years prior to the IIHF World Junior Hockey Championship.  Last season, Team Russia captured their second SUBWAY® Super Series title since 2010 and later edged Canada 6-5 in overtime of the Bronze Medal Game of the 2013 World Junior Championship played in Ufa, Russia, with a roster that included five CHL players and an additional 17 players from this series.  Last year’s Canadian National Junior Team featured 22 players from the 2013 SUBWAY® Super Series along with Rebels’ grad Ryan Nugent-Hopkins who participated in the event in 2010.

“On behalf of all SUBWAY® restaurants across the country, we are thrilled to return for our fifth straight season as title sponsor of the SUBWAY® Super Series,” said Kathleen Bell, Marketing and Creative Services Director, SUBWAY® Franchisee Advertising Fund.  “We are excited that our partnership provides us with the opportunity to lend our support to such an exciting event that has become a fixture on the hockey calendar each November, helping us engage CHL fans not only in the six local host markets but across the entire country.”

The event returns to five of the six 2013 SUBWAY® Super Series hosts with Gatineau previously hosting a 3-2 QMJHL shootout victory in 2007 led by current Boston Bruin Brad Marchand.  Oshawa hosted a 4-3 OHL win in 2006 with the game-winner scored by current Winnipeg Jet Bryan Little.  Sudbury has twice hosted the series including 2007 where Team OHL won 4-2 with a squad that featured Steven Stamkos and John Tavares, then hosted a 2-1 shootout victory for Team OHL in 2010 led by hometown hero and Buffalo Sabre Marcus Foligno.  Red Deer and Lethbridge both hosted in 2004 with current Winnipeg Jet Andrew Ladd scoring two goals and an assist as part of a 6-0 WHL win in Red Deer, and current Washington Capital Eric Fehr scoring a goal and an assist in a 5-2 WHL win in Lethbridge.

All six games of the SUBWAY ® Super Series will be broadcast nationally on Sportsnet with TVA Sports televising both games from the QMJHL.

The 2013 SUBWAY® Super Series is supported by CHL associate sponsors Bank of Montreal and Old Dutch.

SUBWAY® is a registered trademark of Doctor’s Associates Inc.