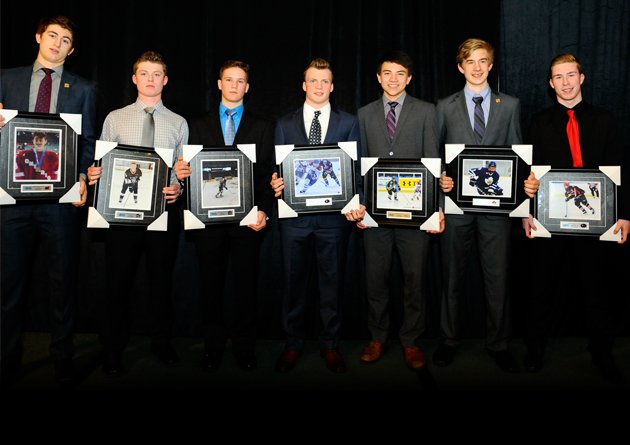 “Congratulations to all seven award winners and to their families, coaches, and teammates for a tremendous hockey season,” said Adam Dennis, the OHL’s Director of Recruitment, who presented the awards on Thursday night.  “The OHL is proud to recognize the achievements of these great players and wish them the best of luck as they prepare for the next step in their hockey and academic careers.”

Six of the seven players are forwards with four who were members of Team Ontario capturing gold at the 2015 Canada Winter Games including McLeod who led all award winners with 81 points including 30 goals and 51 assists in 74 games played with the GTHL champion Marlies.  Gold medal winners also include Suzuki who recorded 68 points in 31 games with the Knights scoring an even 34 goals and 34 assists, Vilardi who tallied 39 points with 18 goals and 21 assists in 21 games played, and Gilmour who recorded 61 points in 36 games for the OMHA champion Red Devils netting 28 goals and 33 assists.  Ton’s stat line includes 63 points with 33 goals and 30 assists in 36 games for the Cubs, while Stevens collected 51 points in 34 games scoring 29 goals and 22 assists for the Jr. Bulldogs.  Auger represents the only defenceman in the group and netted 15 goals and 33 assists for 38 points in 48 games played for the Kings.

The awards were presented at the OHL Cup Showcase Tournament Banquet for the fifth straight year recognizing the achievements of the top minor midget aged players from across Ontario.  The awards are presented annually to honour the minor midget players who best exemplify outstanding ability and the qualities of sportsmanship and leadership as voted by the minor hockey coaches, managers and organizations of each respective league.

Click here to watch video highlights of the 2014-15 Players of the Year.

ALLIANCE Player of the Year:

GTHL Player of the Year:

HNO Player of the Year:

NOHA Player of the Year:

OEMHL Player of the Year:

OMHA ETA Player of the Year:

OMHA SCTA Player of the Year:

Past OMHA Players of the Year: