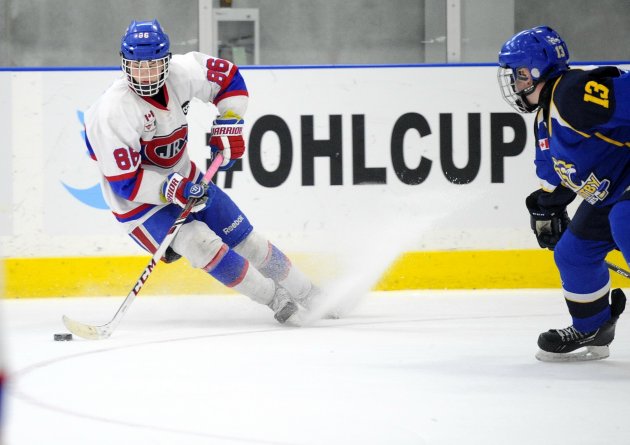 The top eight teams in the 2014 OHL Cup Showcase Tournament battled in Quarter-Final action on Saturday morning, here are the results:

The Toronto Marlboros clinched their spot in the OHL Cup semi-finals defeating the Mississauga Senators 4-2.

A high emotion and intense game saw big hits and many special teams opportunities for both the Marlboros and Senators.

The Marlboros jumped out to a 2-0 lead with goals from Cliff Pu, late in the first period, and Nic Sicoly, early in the second period on the power play.

The Senators got on the board midway through the second with a power play marker from Francesco Luca. However, the Marlboros immediately went to a power play of their own and retook a two goal with another goal from Sicoly, after a beautiful setup from Joseph Mizzi.

The Senators power play continued their success early in the third period with Jason Di Perna capitalizing from the doorstep.

Less than two minutes later, Michael McLeod put the Marlboros back ahead by two converting with a shot in the slot after sloppy play by the Senators in their own zone.

The final minutes saw frustration from both sides, but the Marlboros maintained their two goal lead to punch their ticket to the OHL Cup semi-finals.

The Marlboros were forced to move Pu back to defence after Reegan O’Grady was injured, leaving an already depleted defence shorthanded for the Marlboros.

Pu said he was alright with playing on the blueline.

“It was ok because I kind of play defence sometimes but anything to help the team win,” said Pu. “We just try to play our own game, get pucks deep and go to the net.”

The Senators tournament ends with a record of 2-2-1 and forward Matthew Danner leading them in points with six.

The Marlboros advance to the semi-finals to play the Chatham-Kent Cyclones.

The Chatham-Kent Cyclones defeated the Guelph Gryphons 3-2 in the battle of underdogs.

The Gryphons only made the tournament after a triple overtime victory in the wild card game, and the Cyclones entered the tournament for the first time in their association’s history.

While both teams considered themselves underdogs, the Chatham-Kent Cyclones rode good goaltending to earn a spot in the semi-finals.

The Cyclones jumped out to a 3-0 lead with goals from Brady Pataki, Phil Clarke and Nick Delyzer.

As seen throughout the entire tournament the Gryphons didn’t go away.

Giordano Finoro scored with 6:01 remaining and was followed up by a Connor Bunnaman goal with 4:16 remaining to draw within a goal.

The Cyclones were able to regroup and keep the Gryphons from finding an equalizer to advance to the semi-finals.

Delyzer said after the game he and the Cyclones are putting together a magical run.

Chatham-Kent netminder Joseph Raaymakers continued to have a stellar tournament picking up player of the game honours.

Guelph’s tournament ends with a record of 2-2-1 and being led in scoring by their player of the game Connor Bunnaman and 1999 born forward Austen Keating, both with six points.

Chatham-Kent will continue in their underdog role in the semi-finals Saturday night against the Toronto Marlboros.

Vaughan’s key weapon Adam Mascherin opened the scoring for the Kings, but the Jr. 67’s responded back with goals from Jacob Ramalho and Joey Larcher before the first period was over to lead 2-1.

Vaughan’s Connor Lamont tied the game midway through the second period, but once again the Jr. 67’s gave the Kings no time to relax replying with two goals. Brad Brule and William Bitten had the goals to give the Jr. 67’s a two goal lead into the third period.

In the third period, Mascherin took control of the Kings offense with numerous chances before finally scoring his second of the game midway through the period.

Once again the Jr. 67’s replied instantly with the top line of Cole Carter, Alexandre Way and Bitten connecting for Carter’s third goal of the tournament.

Bitten notched his second goal of the game with less than two minutes remaining to seal the victory for Ottawa 6-3.

Larcher said following the game it would be a dream come true for the Jr. 67’s to win the tournament.

“It’s my dream to be here and it would be a dream to win it too, but we are just working hard as a team to go further and further,” said Larcher. “(Today) we played as a team but the penalties we have to work on those.”

Each team’s power play played a big factor in the outcome. The Jr. 67’s were three for four on the man advantage, while the Kings were one for eight.

Bitten’s two goal performance was rewarded with player of the game for the 67’s. The Kings award went to Connor Lamont.

Vaughan’s OHL Cup comes to an end with a record of 2-2-1. Adam Mascherin finishes the tournament as the leading scorer for the Kings with four goals and three assists for seven points in five games.

The Jr. 67’s advance to the semi-finals and have a chance at redemption against the Toronto Jr. Canadiens who defeated the Jr. 67’s 3-2 on Friday.

The last Saturday afternoon quarter-final featured a battle of the GTHL and OMHA champions with the Toronto Jr. Canadiens prevailing over the Whitby Wildcats 3-2.

The two teams exchanged goals in the first period with the Jr. Canadiens Adam Timleck and the Wildcats Chase St. Aubin scoring for their respective clubs.

In the second period the Wildcats took the lead on a power play goal from Jack Hanley, but the Jr. Canadiens would respond with two goals of their own with the man advantage from Nicholas Favaro and Travis Barron.

The Jr. Canadiens were able to preserve their one goal lead throughout the entire third period and advance to the semi-finals with the victory.

Barron was named player of the game for the Jr. Canadiens with a goal and an assist and said his team played the game they wanted against Whitby.

“The game plan was play our own game, we had a short bench so you have to be smart with your shift lengths,” said Barron. “Just play your own game and do your own job and you’ll be successful.”

Barron also said his team knows what to expect playing the Ottawa Jr. 67’s in the semi-finals.

“These guys are a fast puck moving team, they’re quick and you need to have a good high guy, but again we will come out on top if we do our own jobs.”

Jack Hanley was named player of the game for the Wildcats.

Whitby’s tournament comes to a close with a record of 2-2-1. Joshua Argier led the Wildcats in scoring with three goals and three assists for six points in five games.