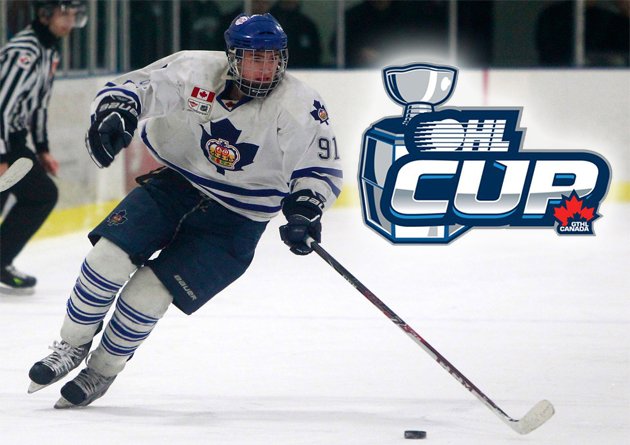 Toronto, ON – The Ontario Hockey League in association with the Greater Toronto Hockey League today announced the final schedule for the 2015 OHL Cup Showcase Tournament, hosted by the GTHL, to be played March 17-23 in Toronto.  All games will be played at Buckingham Arena until the Championship Final moves to the Mattamy Athletic Centre on Monday March 23.

The showcase provides fans and scouts one last opportunity to see many of the top minor midget aged players from across Ontario and parts of the United States compete for the OHL Cup performing against the best competition prior to the 2015 OHL Priority Selection.

Wild Card ‘Play In’ Game Invites were determined by a Tournament Selection Committee based on regular season, playoff, and tournament play.  All three matchups were randomly drawn on Monday night.

11:30 am Oakville Rangers vs. TPH Thunder

8:30 am Team NOHA vs. Toronto Marlboros

*indicates games to be broadcast by Rogers TV

**indicates game to be broadcast live on Sportsnet ONE

The OHL in association with Rogers TV is also pleased to announce coverage of the OHL Cup on Rogers TV Cable 10/63 in Toronto/Scarborough.  Broadcast coverage will include daily games from the round-robin along with both Semi-Final matchups.  Additional airtimes will also be available on Rogers TV Sports+ for Rogers digital customers across Ontario on channels 368 (SD) and 369 (HD).  Visit www.rogerstv.com/sports for complete broadcast schedule or check local listings.

Last season the Toronto Marlboros captured their fourth OHL Cup title in 10 years with a 5-0 win over the Toronto Jr. Canadiens. Marlies forward and OHL Cup MVP Michael McLeod had seven goals and four assists in the tournament and was later selected fifth overall by the Mississauga Steelheads in the 2014 OHL Priority Selection.