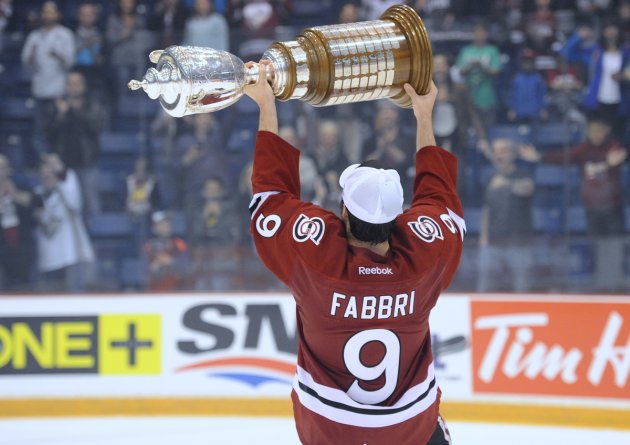 In addition, the final first round draft order for the 2015 OHL Priority Selection on April 11 has been determined and is listed below.

The top eight teams in each conference qualify for the OHL playoffs with the division leaders ranked one-two in each Conference.

In the first round of the playoffs, first place plays eighth, second plays seventh, third plays sixth and fourth plays fifth in each conference.

Teams are re-seeded within their conference after each round and the division winners are always ranked 1-2 within the conference as long as they progress. The champions from each conference play in the OHL Championship Series for the J. Ross Robertson Cup.

If two or more teams are tied for the final OHL playoff position in either conference, sudden-death playoff games will be used to determine the team that advances.

For all other playoff positions, the following tie-breaking system is in place:

The draft order is based on reverse order of the overall regular season standings beginning with non-playoff teams.

Leyden Trophy (East Division): Oshawa Generals
The Generals captured the East Division title for the second straight year and fifth time in franchise history. They also earned division titles in 1991, as well as 1990 and 1987 before winning the OHL Championship in both years.

Emms Trophy (Central Division): Barrie Colts
The Colts earned their sixth Central Division title and second in three years last winning in 2013.  Prior to that they won division crowns in 2010 as part of their franchise-best 116-point season, 2007, and back-to-back in 1999 and 2000 en route to capturing the club’s first and only Robertson Cup.

The Emms and Leyden Trophies were first presented in the 1975-76 season when the OHL was split into divisions with the expansion of the league to 12 teams. The awards originated in recognition of Matt Leyden and Leighton ‘Hap’ Emms for their contributions to junior hockey in Ontario.

Holody Trophy (Midwest Division): Erie Otters
The Otters captured their fourth Holody Trophy as Midwest Division winners. The previous division titles for the Otters came in consecutive seasons from 2000-02 capped off with the club’s only Robertson Cup in 2002. The Holody Trophy, awarded in recognition of the contributions to the OHL by former Guelph and Owen Sound Platers Governor Joe Holody, was presented following the 1998-99 season for the first time with the realignment of the league into four divisions.