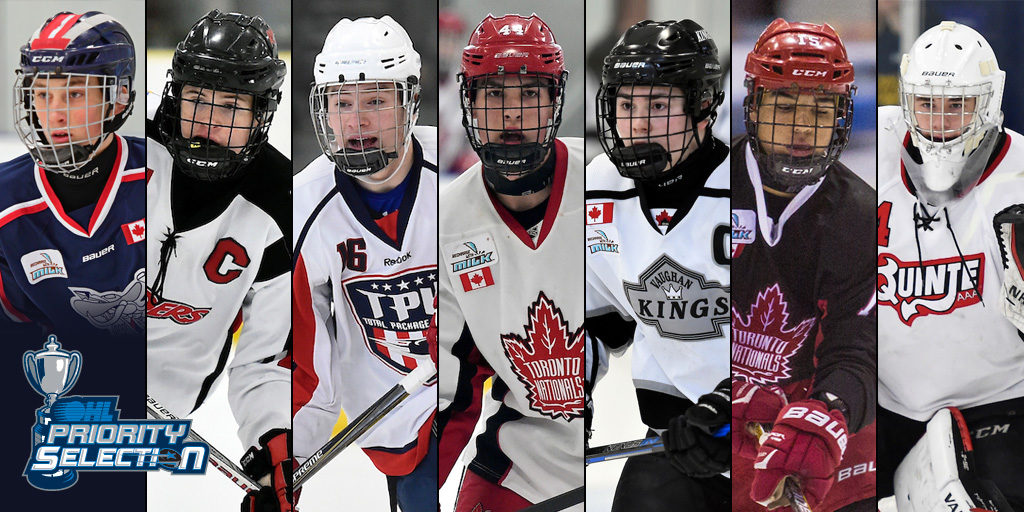 OHL Central Scouting says: Philip is a hard working, skilled centre that never gives up on a play. He has explosive speed with the ability to change gears in mid-stride and is always moving his feet and putting pressure on the opposition. He has very good one-on-one skills and is dangerous whenever he has the puck. Philip has a good shot with a quick release that catches some goalies by surprise. He plays a complete game and is reliable in every situation.

OHL Central Scouting says: Connor is one of the top players in this year’s class. He is a skilled centre that is dangerous every time he is on the ice. He is deceivingly quick and has very good separation speed. His pucks skills are elite and he has great one-on-one moves. Connor is a threat whenever he has the puck on his stick. He sees the ice better than most do at this age and has the ability to find the open man and put the puck in a position for that player to get a good chance.

OHL Central Scouting says:  Dylan is a versatile forward that has the ability to play the wing or centre. He has a good understanding of the game and is a strong positional player. He is a good skater and is tough to handle off the rush as he likes to go wide and challenge defenders. Dylan has good vision with the puck and does a great job of moving the puck at the right time to the right player. He has a good shot with a quick release which surprises a lot of goalies. He competes hard on every shift.

OHL Central Scouting says: Brandon is a big power forward with high-end skill. When he is playing a physical style, there is no one in the age group that compares. He has a long, powerful stride that allows him to reach top speed quickly. Brandon is more of a pass first type of player and has the ability to make passes that you don’t expect him to make. He possesses a heavy shot that he gets off extremely fast. Brandon has a high hockey I.Q. and always seems to be in the right spot at the right time.

OHL Central Scouting says:  Nathan is a mobile defender with good puck skills that plays with a ton of confidence. He battles and competes hard each and every shift and plays way bigger than his size. He possesses a heavy shot from the blue line and he uses his mobility to find the open lane to the net. He played in every situation for his team this season and came back strong from injury, getting better with each game he played. Nathan was a big reason why Vaughan enjoyed the playoff success that they did.

OHL Central Scouting says: Robert is one of the top offensive defencemen in this age group. He always wants to have the puck on his stick and when he gets it he usually makes a good play to help start or create a chance. He is an exceptional skater that is strong in all directions. When he jumps up in the rush he has the ability to get back and still play his position. He sees the ice very well from the back end and makes good crisp passes. Robert quarterbacks the power play and makes good pass/shot decisions.

OHL Central Scouting says: Ethan’s solid play played a large role in Quinte reaching the 2017 OMHA Championships where they placed third and earned a spot at the 2017 OHL Cup Powered by Under Armour. He is a technical goaltender who moves well in his net. He shows good battle and doesn’t give up on the play. Ethan is a competitor who gives his team a chance to win every game.