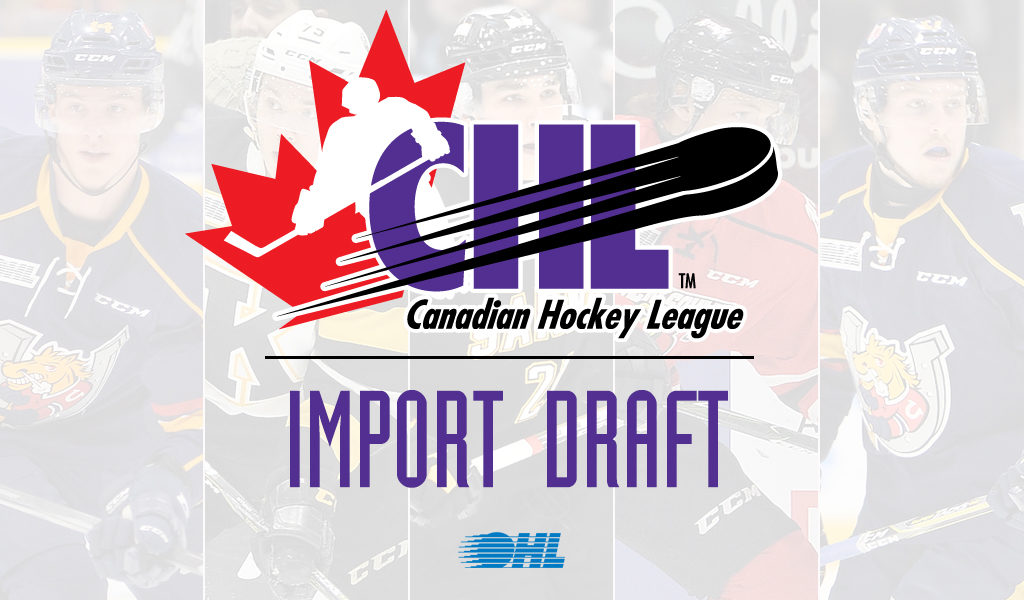 Toronto, ON – The Canadian Hockey League today announced details for the 27th annual CHL Import Draft which takes place on Thursday June 28, 2018, beginning at 11:00 am Eastern.

The two-round draft will take place online with the order of selection rotating through each of the CHL’s three leagues using an inverse order of final regular season standings within each league from the 2017-18 season.  The QMJHL’s Saint John Sea Dogs hold the number one pick, followed by the WHL’s Edmonton Oil Kings at number two, and the OHL’s Sudbury Wolves who will select third overall.  Each team in the CHL is permitted to dress and play a maximum of two import players each season who are selected annually through the CHL Import Draft.

For the first time since 2013, goaltenders will be eligible for selection in the CHL Import Draft in addition to forwards and defencemen.

18 of the OHL’s 20 member teams are expected to pick in Thursday’s draft with both the Guelph Storm and the Sarnia Sting electing to pass on their selections.  It is expected that the Erie Otters, Flint Firebirds, Kingston Frontenacs, Kitchener Rangers, Oshawa Generals, Ottawa 67’s, Sudbury Wolves, and Windsor Spitfires will only select once for a projected total of 28 picks by OHL teams.

A total of 12 players acquired through the CHL Import Draft were recently selected in the 2018 NHL Draft led by top CHL pick Andrei Svechnikov, a Russian forward from the Barrie Colts, chosen second overall by the Carolina Hurricanes.  Other first round picks from the CHL Import Draft included Czech forward Filip Zadina of the Halifax Mooseheads chosen sixth overall by the Detroit Red Wings, Swedish defenceman Rasmus Sandin of the Sault Ste. Marie Greyhounds chosen 29th overall by the Toronto Maple Leafs, and Russian defenceman Alexander Alexeyev of the Red Deer Rebels chosen 31st overall by the Washington Capitals.

Last season a total of 72 players were selected from 11 different countries led by 19 players from Russia and consisting of 50 forwards and 22 defencemen.