2018 OHL Cup Powered by Under Armour: Meet the Teams 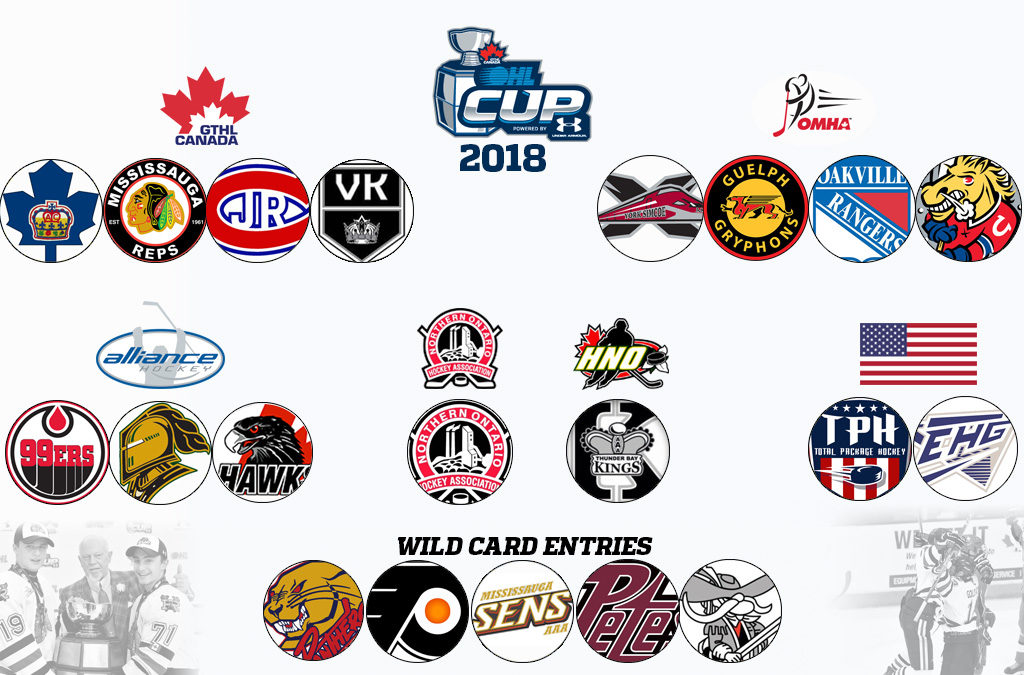 The 20 team stage is set as the 2018 OHL Cup Powered by Under Armour is underway at the Scotiabank Pond in Toronto.

Here’s a fan’s guide to the competing teams:

Outlook: High-powered Rangers went wire-to-wire atop the SCTA standings, going unbeaten throughout the regular season. Group features a wealth of talent all throughout the depth chart and looks to get back on track after falling short of their expectations at the OMHA Championships.

Outlook: Won’t find many better 1-2 punches than Cole Perfetti and Ty Tullio up front. Perfetti and defenceman Ryan O’Rourke reached the OHL Cup quarter-final as members of the Whitby Wildcats last spring, with Perfetti leading the club in scoring. Vaughan plays with pace and showed that they can skate with the GTHL’s best during the season.

Outlook: A team with several members of the GNML Minor Midget Showcase champion North Bay Trappers, Team NOHA has been very competitive in recent years, playing to three ties in last year’s showcase. Though they haven’t played together as a group, many of these players are familiar with each other and will look to form some quick chemistry out of the gate.

Outlook: A team that finished first in the OMHA ETA East Division, the Petes have proven capable on both sides of the puck and pair that combination with strong goaltending from Will Cranley and William Craig. They missed out on a chance to compete at the OMHA Championships after a 3-2 Play-In loss to Quinte and played with a chip on their shoulder to gain entry to the 2018 OHL Cup Powered by Under Armour on Tuesday.

Outlook: GTHL Champions also won the Whitby International Silver Stick this season and feature some of the top young talent in the province. A team that can do it all, the Marlboros were the top-ranked team in all 17 editions of the weekly OHL Cup Powered by Under Armour Top 10 Rankings this season.

Outlook: The Gryphons emerged as silver medalists at the OMHA Championships and play an honest, hard-working game led by the dynamic duo of Morrison and Kirk up front. A team that got hot at the right time with a strong finish to the season and great showing at the SCTA Qualifiers.

Outlook: Undersized team challenges opponents with speed, battling for space and control of the puck. Coached by former NHLer and Guelph Storm head coach Scott Walker, the Hawks were the ALLIANCE’s first place team during the regular season, surrendering just 52 goals over 33 games.

Outlook: Annual American entry gets a tough challenge out of the gate against a high-powered Marlboros club. Elite Hockey Group has talent up front along with a big defence corps, featuring four blueliners over 6-feet tall.

Outlook: Led by former OHL forward Mark Cadotte behind the bench, the Panthers boasted the ALLIANCE’s best offence this season, scoring 126 goals over 33 games. Sun County can score, but keeping pucks out will be the challenge this week against some of the province’s top shooters. Not a team to be overlooked.

Outlook: OMHA Champions have a number of names drawing attention from OHL clubs but have struggled to put all of the pieces together at times this season. The Express ride a wave of momentum into the showcase and have a big centrepiece offensively in dynamic forward Quinton Byfield. They won an OHL Cup title two years ago and the Express will be in the thick of things again.

Outlook: GTHL Finalists gave the mighty Marlboros a good fight before settling for second. Reps benefit from the strong goaltending of Tristan Lennox while a steady defence corps and offence-by-committee helped pave the way to a very respectable season. A team not to be underestimated in a week-long showcase.

Outlook: A team that has featured some standout forwards in years past, TPH brings plenty of size up front boasting one of the biggest players in the showcase in 6-foot-6 Kyle Van Compernolle. The blue line will be depended upon as a group largely unfamiliar with each other gets accustomed in the early going.

Outlook: Hard-working team had a hard time scoring goals at various points this season but struck for three in the opening 10 minutes against Quinte on Tuesday. Steady defenders Thomas Haynes and Luka Profaca log big minutes. Senators will need to be at their best against elite opposition this week.

Outlook: Came out on top of one of the longest games in OHL Cup history on Tuesday. A gritty, hard-working team that wins battles to create offence. The Rebels are back at the OHL Cup for a third straight year, looking for their third ever championship. The Rebels make it a Mississauga trifecta in the Shanahan Division as they go up against the Senators and Reps.

Outlook: Cinderella story 99ers hoisted the ALLIANCE Championship trophy after a complete team effort put them past the London Jr. Knights as 2003-born Maddox Callens scored the game winner. Theoren Hill stepped up to lead the team in playoff scoring while steady defender Dylan Robinson was an anchor on the back end. Brantford returns to the OHL Cup Powered by Under Armour for the first time since 2009.

Outlook: Dylan Robinson has been making things happen offensively all season and leads the Jr. Canadiens into action this week as they seek their first OHL Cup title since 2008. Team is coached by former OHL 100-point scorer Daniel Sisca.

Outlook: Solid group is led by 41-goal scorer James Hardie while standout defenceman Alec Belanger had well over a point-per-game this season. Colts are a well-balanced team that works until the final buzzer. They’ll look to rise to the challenge against the top teams in the province this week.

Outlook: From the far reaches of Thunder Bay, the Kings travel a long way to compete at the OHL Cup and will look to improve upon an 0-4-0-0 showing last year. Michael Stubbs is Thunder Bay’s offensive engine but it’ll take more than just him to bring success to the boys in black and white this week.

Outlook: A team that stayed in the thick of things in the GTHL throughout the regular season,  the Don Mills Flyers hit adversity come playoff time, taking a first round exit before dropping a closely contested GTHL Wild Card Series against the Mississauga Senators. The Flyers are back though, taking a hard-fought win over Detroit on Tuesday on a game winner from Matthew Perciballi. Big netminder Joe Vrbetic is among the best in his class and gives the Flyers a chance to win with his solid play.