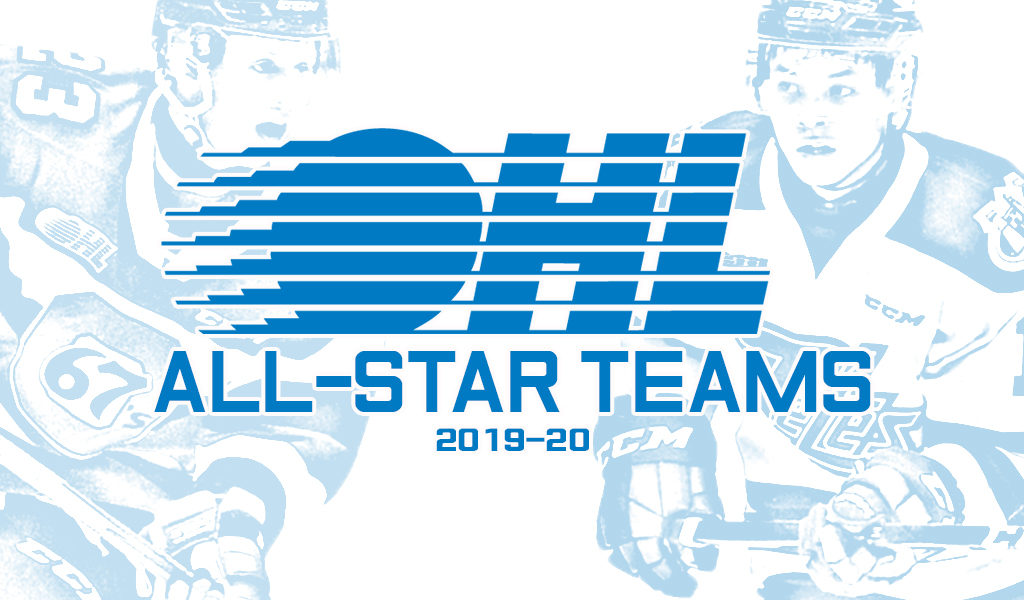 The OHL All-Star Teams were selected by the OHL’s General Managers, with voting conducted in two stages beginning with a Conference ballot followed by a final ballot that integrated the top selections from both the Eastern and Western Conference results.

Headlining the First Team is Red Tilson Trophy recipient and OHL scoring leader Marco Rossi of the Ottawa 67’s who becomes the first 67’s player to be selected to the League’s First All-Star Team since Tyler Toffoli in 2011-12. The top 2020 NHL Draft prospect led the entire Canadian Hockey League with 120 points, producing at a 2.14 point-per-game clip for the OHL’s first place team. Joining Rossi in the forward ranks was OHL goal-scoring leader Nick Robertson of the Peterborough Petes, a Toronto Maple Leafs prospect who lit the lamp 55 times in just 46 games. Flanking the right side is Los Angeles Kings prospect Arthur Kaliyev of the Hamilton Bulldogs who scored 48 goals and posted 98 points in 57 contests. OHL Defenceman of the Year Noel Hoefenmayer of the Ottawa 67’s stands out on the blue line after recording a league-best 82 points including 26 goals over 58 games. Top draft eligible rearguard Jamie Drysdale joins Hoefenmayer on the back end after a sophomore season with the Erie Otters that included 47 points over 49 games. Fellow Canadian National Junior Team gold medalist Nico Daws of the Guelph Storm, who was voted OHL Goaltender of the Year, was appointed as a First Team All-Star netminder after posting a league-high .924 save percentage and five shutouts. OHL Coach of the Year Andre Tourigny of the Ottawa 67’s rounds out the group, being named to the OHL’s First All-Star Team for a second consecutive year.

Washington Capitals first round pick Connor McMichael is positioned down the middle on the Second Team, joined by wingers in 111-point scorer Cole Perfetti of the Saginaw Spirit and fifth-year overage veteran Joseph Garreffa of the Ottawa 67’s. Dallas Stars first round selection Thomas Harley of the Mississauga Steelheads joins New Jersey Devils prospect Kevin Bahl on the back end while 2020 OHL Humanitarian of the Year and Los Angeles Kings prospect Jacob Ingham of the Kitchener Rangers holds down the crease. Dale Hunter of the London Knights was voted Second Team Head Coach, being selected to an All-Star Team for the sixth time in his OHL coaching career.

Another look at the #OHL’s very best of 2019-20, with seven standouts selected to the League’s First All-Star Team.

More of the #OHL’s standout talent over the 2019-20 season is featured in the League’s Second All-Star Team released earlier this week.

The #OHL‘s top talent is on display with seven more players selected to the League’s Third All-Star Team.