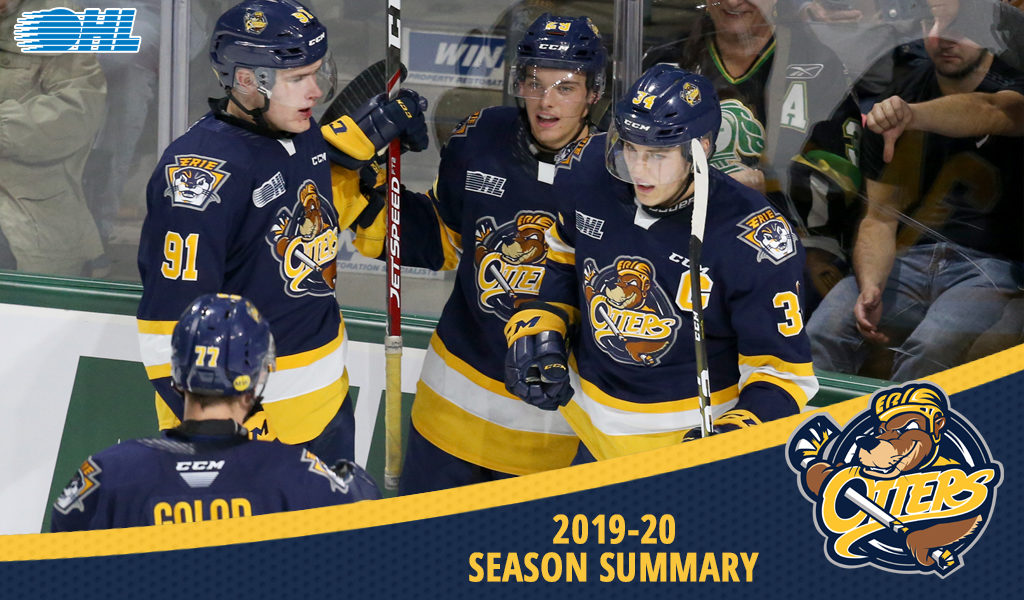 The 2019-20 season saw the Erie Otters put up a fight to qualify for the OHL Playoffs for the first time since their last championship in 2017. Though the season was cut short, they accomplished their goal. On the ice, they boasted a slew of stellar performances both up front and on the back end. Off the ice, the club emerged from the season with marks in the community and a stamp in OHL history.

Back in the playoff scene
Erie’s 2017 OHL championship was on the tail end of a CHL-record four straight 50-win seasons and would mark the last time the club saw their name in playoff contention until now. The second half of this season saw the Otters battle for what would have been their first OHL Playoff appearance since they hoisted the J. Ross Robertson Trophy that year. They rounded out their campaign at .500 with a 26-26-4-7 record and 63 points, edging out the Soo Greyhounds for the eighth and final Western Conference spot; a space that the Greyhounds and the seventh place Owen Sound Attack occupied at points throughout the season.

Golod and Yetman excel
Third year forwards and seasoned playmakers Maxim Golod and Chad Yetman led the charge in helping the Otters ultimately succeed in their playoff push. Golod, this year’s Red Tilson Trophy nominee, rounded out the year with a 78-point (25-53–78) production atop the Erie scoring race; a 43-point uptick from last season’s sophomore total of 35 points. Yetman emerged as a vital part of the team’s battle as he more than doubled his goal output with a team-high 43 markers on the season. His impressive performance placed him eighth among all OHL skaters in goals scored and, for the second consecutive year, he finished second in team scoring, this time with 74 points in 61 games. It’s a credit to the Otters’ scouting staff, who nabbed Yetman and Golod in the 10th and 13th rounds of the 2016 OHL Priority Selection respectively.

Drysdale dazzles on his way to the draft
As the top defensive prospect heading into this year’s NHL Draft, Jamie Drysdale maintained a consistent pace on the Erie blue line with 47 points (9-38–47) over his 49 appearances. Ranked third among North American prospects by NHL Central Scouting, Drysdale’s strong skating and ability to play an impactful game on both ends of the ice was on full display over the course of the season. He impressed with his ability to adapt in high-pressure situations as a 17-year-old this past winter, helping Team Canada to a gold medal at the World Juniors.

Trending upward
Along with stellar productions from the trio of Golod, Yetman and Drysdale, many skaters impressed with improved performances over the course of the campaign. Daniel D’Amato was good for 18 goals and 32 points in his sophomore stint, an upward swing from his four-goal, 15-point rookie output. Third year skater Hayden Fowler, who joined the Otters midway through last season, saw steep improvement with a 42-point showing in 52 games played to follow up last season’s 22-point production. Mid-season addition Kyen Sopa chipped in for 15 points over 22 games to top off a 46-point season. First-year forward Austen Swankler also made a 45-point impact over his first 59 games with the squad.

Paying it forward and breaking barriers
The Otters also had a hand in making a difference in more than one way.

They notably made headlines and history this season when they announced they’d hired the OHL’s first ever female scout in Barrie native Kiana Scott. Following years of experience observing and reporting on players at a number of levels, GM Dave Brown and the team invited Scott to join the hockey operations staff as a bantam scout. Scott expressed a hope to inspire other girls and women to be able to do the same.

Otters captain Jack Duff also brought forth an idea to give back over the course of the year when he teamed up with Big Brothers Big Sisters of Family Services of NW PA to kickstart his “Captain Jack’s Kids” initiative. Inspired by past OHL players visiting his classroom as a young kid, Duff expressed his desire to give back in a similar way. The 20-year-old defender invited kids of the program along with their families to attend Otters home games and gave them an opportunity to meet with him afterward, hoping to offer a fun, unique experience that they may not have been granted otherwise.