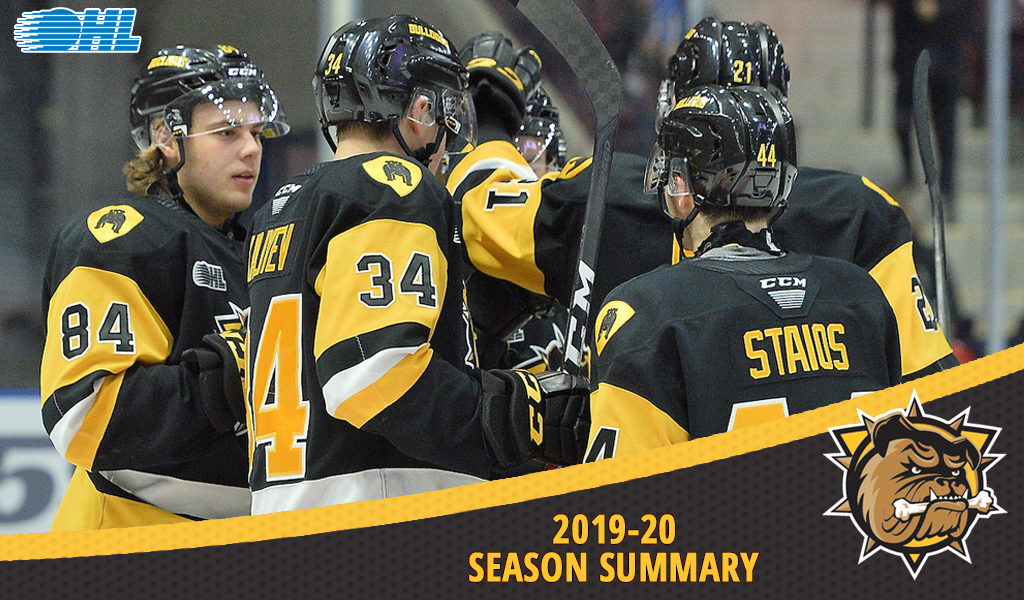 Two years removed from an OHL championship, the Hamilton Bulldogs (24-30-7-1) wrapped up the 2019-2020 campaign fourth in the East Division, a space they’d owned all year. Boasting one of the OHL’s top scoring threats in Los Angeles Kings prospect Arthur Kaliyev, the Bulldogs struggled with some injuries, particularly the loss of sniper Jan Jenik following his tour of duty with the Czech Republic at the World Juniors.  With just one 2000-born skater left on the roster entering 2020-21, and on the hunt for a new head coach, it’s clear the team’s eyes have been firmly set on the future. In terms of some positive takeaways, they earned a few nods in the history book this past season that include a record-matching point streak, a part in the second-highest OHL scoring contest to date (an 11-10 OT win over Sudbury) and a new all-time leader in points and goals.

Jenik’s dominance cut short
With a start as hot as his, Jan Jenik’s sophomore season was set to be a good one. Over 27 appearances, the rising Arizona Coyotes prospect was held off the scoresheet just once. In that time, he put forth a league-leading 22 goals and 56 points, and was no stranger to point totals of three, four, even five on any given night. The second year skater maintained a 2.07 point per game stretch over his league-leading 26-game point streak; a stretch that began with Sept. 27’s season opener and eventually met its demise on Dec. 6 before taking off for the World Juniors. In the midst of his World Juniors stint with the hometown Czech team, Jenik’s season was cut short when he suffered an injury that would force him out of the season and potentially cap off his junior hockey career. As the season drew to its abrupt end, Jenik’s 56-point total remained second in the Hamilton scoring race.

Kaliyev carves his name into Bulldog history
Arthur Kaliyev stood out by a mile on the Bulldogs roster and it isn’t even close. The Los Angeles Kings prospect led the squad with 98 points, a steep climb from next-in-line Tag Bertuzzi’s 25 goals and 47 points, followed by numbers from sophomore forward Logan Morrison (23-22—45) and blue liner Nathan Staois (6-35—41). Over the course of his dominant showing, Kaliyev became the club’s all-time leader in points and goals. Following the conclusion of his third year with the team, he’d have lit the lamp 126 times and registered an impressive 248 points. He’d also finish out the season as the recipient of the Jim Mahon Memorial Trophy for the league’s top-scoring right winger with a 98-point production, good for fifth overall in league points. Of note, 41 of those 98 tickets on the scoresheet were earned on the power play.

Mysak wastes no time settling in
While the absence of Jenik down the middle was deeply felt, the Bulldogs gained a valuable asset to centre the top line in his Czech World Junior teammate Jan Mysak, who was the club’s first round selection in the 2019 CHL Import Draft. Following an impressive showing on the World Junior stage with recognition as the team’s top player in three out of five games, Mysak, a top prospect heading into the NHL Draft, committed to the organization midway through the OHL season from HC Litvinov in the Czech Extraliga. He wasted no time making an impact, producing 25 points (10-15—25) in 22 games; an especially impressive production when taking into account the difference in ice size and age group that may have warranted an adjustment period. NHL Central Scouting lists Mysak at 28th among CHL North American skaters.

Captain Nurse graduates following injured season
Awarded the fourth captaincy in the Bulldogs’ five-year history ahead of his overage season, hometown product Isaac Nurse was striving for this one to be his best season yet. Unfortunately, an injury suffered in October would keep him out of the lineup for half of his final stint in junior hockey. It’s not the way he’d wanted to have competed with one last year to impress, having only suited up for 31 games, but the 21-year-old winger was able to post a consistent tally, chipping in for 26 points (15-11—26). He completes a four-year career with 92 points over 221 games in a Bulldogs sweater.

Coaching changes
The Bulldogs stepped on the ice this season with a new, albeit familiar face leading the charge from behind the bench. Vince Laise was announced as the new head coach in August, having served as an assistant coach since 2016 with a hand in the club’s 2018 OHL championship run. Towards the season’s end in early March, it was announced the club had parted ways with Laise and that president and general manager Steve Staios would be overseeing the coaching staff alongside associate coach Dave Matsos.