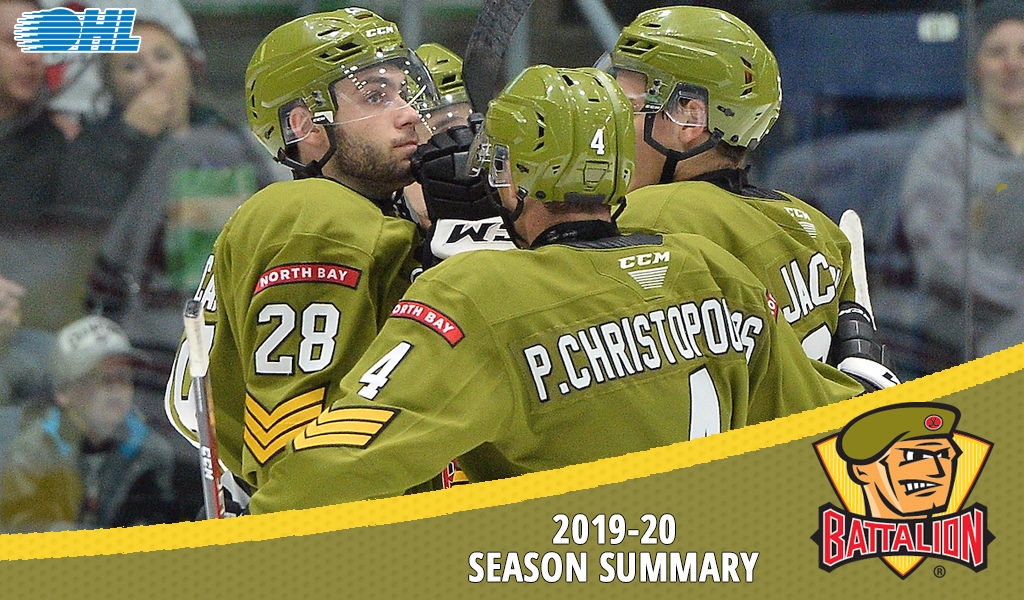 It’s onwards and upwards for the North Bay Battalion after finishing 10th in the Eastern Conference. Though their growing pains were glaring, their 2019-20 brought with it a breakout season, fresh faces in charge, and a whole lot of hope for the future of the Troops.

Restarting from the bottom
It wasn’t the club’s worst season of all time, but it’s a season they’re looking forward to moving on from. With a record of 17-41-4-0 and 38 points, the Troops finished out the campaign at the bottom of the standings with a league-lowest goals scored (189) and a second-to-worst goals-against (314). The team got off to a 5-23-0 start by early December, which meant it was time for a clean slate. As it turned out, the changes would come first at the coaching and management level.

The end of an era
It was truly the end of an era when Stan Butler, the only body to serve as head coach and director of operations since the club’s inaugural 1998-99 season in Brampton, was reassigned to the role of special advisor. On Dec. 10, bench boss duties were assigned to assistant coach Ryan Oulahen in the interim while Adam Dennis was officially in as general manager, having held the assistant title beforehand. The Oulahen era was ushered in with a 12-18-4 tally that prematurely met its conclusion when the regular season was cancelled. Oulahen, a former Battalion captain himself, was officially sworn in as the second head coach in club history in late March.

The positives
When the regular season came to an abrupt end on March 12, there were some initial questions surrounding the remaining playoff slots that had yet to be clinched. One of those questions was “Will the Troops squeak their way into the playoffs?” – a plausible idea that would have been unthinkable just over a month earlier. The Kingston Frontenacs and Niagara IceDogs both had a comfortable leg up on the Troops for the majority of the season, leaving the postseason out of the picture, or so everyone thought. In their final 10 matchups, however, the Troops went 6-3-1-0 with a fighting chance at catching the ‘Dogs (who had slipped to ninth) and the eight-seeded Fronts, both of whose final 10 games weren’t nearly as successful. Rookie netminder Joe Vrbetic also notably won five of his final seven appearances, the best tally he’d seen all year, and posted two shutouts within that same timeframe. Though the season came with its rather obvious growing pains, Dennis seems confident in the team they’ve already started to rebuild around a crop of ’03 skaters in Liam Arsnby and twins Alex and Paul Christopoulos. The trio visibly gained a lot of experience this past season and are expected to be complimented nicely by first round selection Ty Nelson in 2020-21.

A solid showing from Captain Moncada
With Brad Chenier off to Sudbury mid-season, one of many vets traded at the deadline, the captaincy was Luke Moncada’s to take, and his breakout success on the ice was definitely worthy of a leadership title. Following point productions of 24 and 17 respectively in his previous two seasons, the centreman went on to put up an impressive 34 goals and 60 points atop the Battalion scoresheet, including a hat-trick of hat-tricks over his third full OHL term. Fun fact: Moncada led the way in shorthanded goals for much of the season, finishing things off tied with Saginaw veteran DJ Busdeker for second in the column with seven to his name. Even better? The leading forward is eligible to return for an overage season next year.

Coe’s confidence
In his third season with North Bay, Brandon Coe took on a big role; in his NHL Draft season, nonetheless. The leading right winger chipped in with a career-high 25 goals and 57 points over the 60-game campaign. An appearance in January’s 2020 Kubota CHL/NHL Top Prospects Game allowed the 6-foot-4 skater to flash his speed and vision under more of a magnifying glass where he made an impression with a crystal clear level of confidence. All in all, it was a telling season for Coe, who finished out the year ranked 35th among North American players in NHL Central Scouting’s Final 2020 Draft Rankings, up 12 ticks from January’s midterm list.