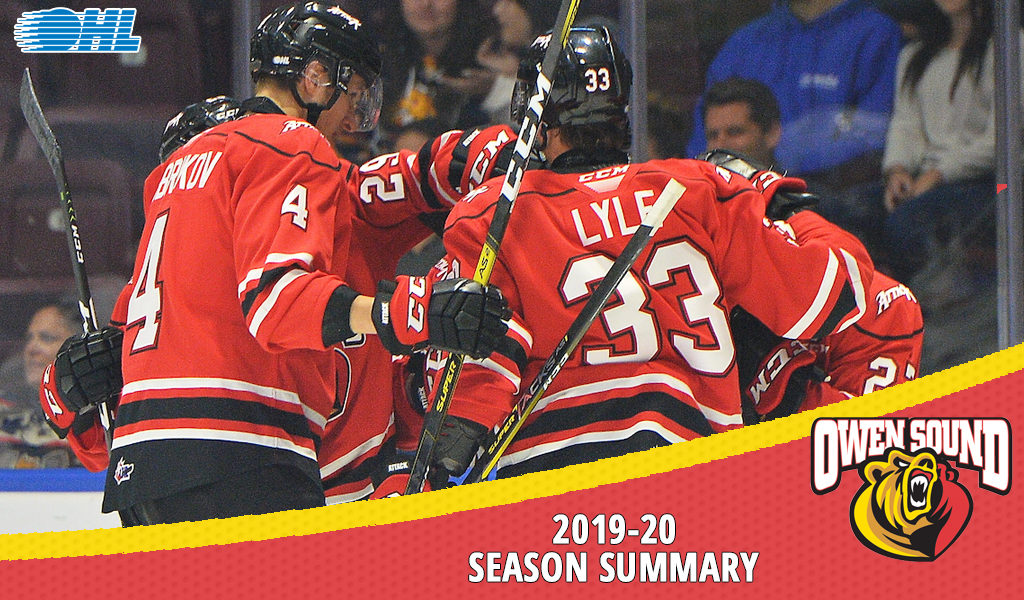 A 10th straight 30-win campaign, a new all-time goal-scoring leader among defenders, a large desire to give back to the community; this season’s Owen Sound Attack had all of it. While the season didn’t come with the ending anyone would have wanted, there were many positives worth acknowledging.

Postseason potential
As time wound down on the regular season, those seventh and eighth place Western Conference playoff seeds weren’t set in stone by any means. Holding a 30-24-4-4 record – earning them the unique distinction of one of only three CHL teams with 10 straight 30-win seasons – with 68 points and a five-point cushion above the Erie Otters when the season met its unexpected early conclusion, however, the Attack’s seventh place seat would earn them a spot in the postseason that should have been. Had the playoffs begun then and there, they’d have squared off with the top seeded Saginaw Spirit in what would have been their 10th straight playoff appearance.

Lyle leads from the blue line
Among the highlights of the squad’s 2019-20 campaign was Brady Lyle’s emergence as one of the league’s top offensive producers from the blue line. The overager’s 65-point showing placed him fourth among all OHL defenders as he became the Attack’s new franchise goal-scoring leader among defencemen in the process. Lyle notched a career-high 22 goals over his final OHL season, rounding out a total of 49 markers and 175 points throughout his five-year career that included time with the North Bay Battalion as well. Following his final and best season yet, Lyle received ‘Hardest Shot’ recognition in the 2019-20 OHL Coaches Poll and also signed a two-year contract with the AHL’s Providence Bruins.

No lack of leadership
When taking a dive into the team’s leaders over the course of the season, it only makes sense to start with Aidan Dudas, who was appointed captain in September; an accolade he earned, according to coach Alan Letang, on account of his high energy and compete level. In his fourth stint with the Attack, Dudas proved to be another reliable force up front, having chipped in for 53 points over his 48 appearances that included a hot start of 23 points in his first 16 games. His captaincy duties carried over to the international stage with Team OHL at the 2019 CIBC Canada Russia Challenge, and he got to further demonstrate that talent and leadership on when he helped guide Team Canada to their World Junior gold medal over the winter, freshly after signing his entry-level contract with the Kings. Of course, Dudas was in good company this year. Coming off a 25-point showing over last season’s 47 appearances split between the Attack and the London Knights, fourth year veteran Sergey Popov put forth an explosive performance atop the Owen Sound scoring race with 70 points. Barret Kirwin led the Bears with a 30-goal showing in his fourth OHL term, while Kaleb Pearson came flying out of the gate with a 34-point barrage over a 27-game stretch that dates back to January 1st. The team also welcomed back overager Matthew Struthers, who was good for a consistent 38 points in 37 games with the Bears upon re-joining them from the North Bay Battalion in December.

Guzda comes off age
Mack Guzda racked up high minutes during his third season in net for the Attack, having suited up for 51 games – the second highest of any netminder in the OHL and outdoing last year’s 49 appearances. He skates away from the shortened season with his best numbers yet in a 3.18 goals-against average and .900 save percentage. Guzda owned a 24-20-4-3 record and registered the second highest save total at 1454. The 6-foot-5, 210Ib. native of Knoxville, Tenn. is currently undrafted.

Woolley’s Warriors making a difference
One of the biggest stories connected to the Owen Sound Attack’s 2019-20 season happened, and continues to happen, off the ice. Ahead of puck drop this past season, third year OHL defenceman Mark Woolley launched “Wooley’s Warriors,” a non-profit in support of young athletes living with Type 1 diabetes like himself, stressing a strong desire to use his platform to give back. Using the platform he built to spread awareness and knowledge – and with the support of the team, who hosted a successful “Woolley’s Warriors” night in November – he went on to raise over $40,000 to help send kids to D-Camps, or Diabetes Canada’s camps for children. Woolley also dedicated his time to inviting kids to Attack games, meeting with them afterward, and participating in local charity events. It’s no surprise he was awarded the team’s Red Leckie Award for his contributions to the community.