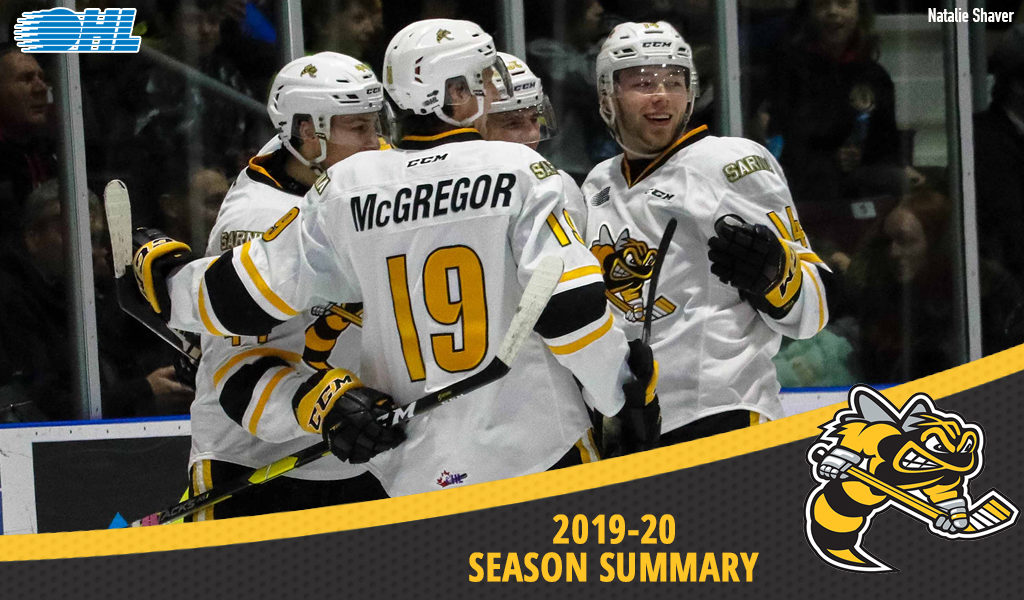 The Sarnia Sting didn’t have any trouble scoring goals, but their struggles in other areas, paired with some lingering injuries throughout the season saw them finish at the bottom of the West Division standings. Former director of player personnel Dylan Seca was recently named the club’s general manager as the Sting build towards a brighter tomorrow. Even so, their offensive crop saw some standout performances that are assuredly worthy of recognition.

Out of the playoff picture
For the first time since the 2013-14 season, the Sting remained out of the postseason picture. They’d round out the season fifth in the West Division and 10th in the Western Conference with a 22-34-5-1 record. Among their struggles was a noteworthy 13-game losing streak on home ice that began before the holiday break in December and carried on until Feb. 20.

Perreault’s production
Of course, there were positives to this season; among them a second straight 30-goal performance from talented forward Jacob Perreault. The sophomore came flying out of the gate with a 10-game point streak and followed up his impressive 55-point rookie campaign with a 70-point showing in his NHL Draft year, lighting the lamp a team-best 39 times. His star-studded season featured a spot on the 2020 Kubota CHL/NHL Top Prospects Game that also saw him finish as a top three performer in six of the on-ice tests at the sporting combine. The high end offensive skater has been ranked 17th in North America by NHL Central Scouting.

McGregor makes noise
Overager Ryan McGregor generated some buzz in the final season of his five-year career with the Sting that caught the eyes of the Arizona Coyotes. With 286 games under his belt, McGregor set a new franchise record for most games played in black and yellow. Following the conclusion of his 52-game season over which he notched 68 points, including a career best 27 goals, the centreman signed an entry-level deal with the Coyotes.

A strong send-off for Josling
Also capping off his OHL career in a Sting uniform was Sean Josling, who did so with his strongest season yet. The fourth year vet finished out the campaign atop the Sarnia scoring race with 78 points to his name and found the back of the net 32 times over his 60-game year. Never drafted into the OHL, Josling went on to put up a solid career in the League with 189 points (86-103–189) over 250 contests with Sarnia.

Rees doubles up
Had Jamieson Rees remained healthy and in the lineup all season, the Sting’s offence would have been that much scarier. For the second straight time, Rees’ season was shortened substantially by injury while he also spent some time on the sidelines due to suspension. Remarkably, it hardly slowed him down. The Carolina Hurricanes prospect nearly doubled his output from last season with a 61-point performance over 39 appearances, a feat that placed him fourth in team scoring. It will be interesting to see what Rees can do with a full season.