Battle of the Border 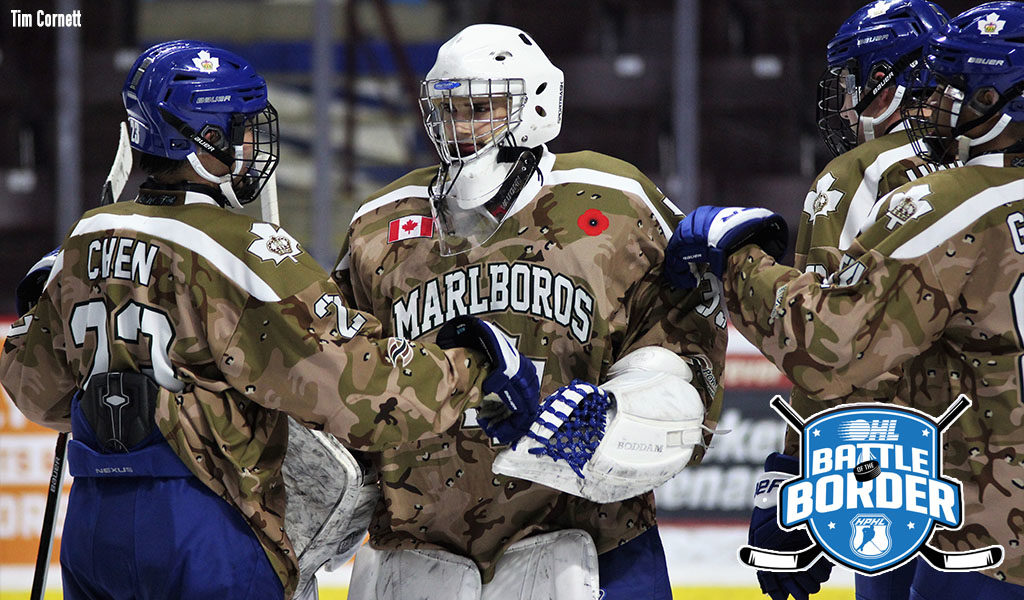 A busy opening day of the 2019 Battle of the Border in Windsor, Ont. resulted in a number of hard-fought contests settled by just one goal. A total of 11 games were played between the Minor Midget and Major Bantam age groups at the WFCU Centre and its four ice pads.

Toronto Marlboros 2, Detroit Compuware 1
The Toronto Marlboros started the 2019 Battle of the Border with a 2-1 win as Samuel Buonaguro stood tall, backstopping his team to victory. Luke Devlin and Lorenzo Bonaiuto provided Marlboros goals while Detroit’s Seth Constance broke-up Buonaguro’s shutout bid 3:44 into the third period. The Marlies held Detroit to 0-for-3 on the power play, killing off three straight penalties to end the game.
STATISTICS

Toronto Titans 3, Oakland Grizzlies 2
Hayden Simpson‘s third period goal 7:09 into the frame stood as the game winner as the Toronto Titans edged the Oakland Grizzlies 3-2 on Friday afternoon. Aaron Andrade led the Titans attack with a goal and two assists while Alexander Dubajic rounded out the Toronto scoring. Liam Sztuska picked up the win in goal, surrendering Oakland goals from Nathan Lewis and Dario Sacino.
STATISTICS

Chicago Mission 2, Southern Tier Admirals 1
Carson Walters scored the game winner midway through the second period as the Chicago Mission defeated the Southern Tier Admirals 2-1. Walters finished with a goal and an assist while blueliner William Kroeger also scored. Lucas Szyszka was the winning goaltender with the only blemish on his afternoon coming in the form of a Sam Alfano goal. The chippy affair saw the two clubs combine for 11 infractions when all was said and done.
STATISTICS

Chicago Young Americans 4, Sun County Panthers 2
William Steadman scored a pair to lead the Chicago Young Americans to a 4-2 win to open their Battle of the Border schedule. Steadman scored second period goals just under five minutes part to put Chicago up 2-1. Colin Hartwell finished with a goal and an assist while Marc LaFrance also touched twine. Ryan Costin picked up a pair of helpers while Owen Flores earned the win in goal. Luca Muscedere and Drew Booker scored goals for the Sun County Panthers as they came out on the losing end. The two teams combined for a total of 18 infractions in the hard-hitting affair.
STATISTICS

For more information and a full schedule of the 2019 Battle of the Border Showcase, click here.