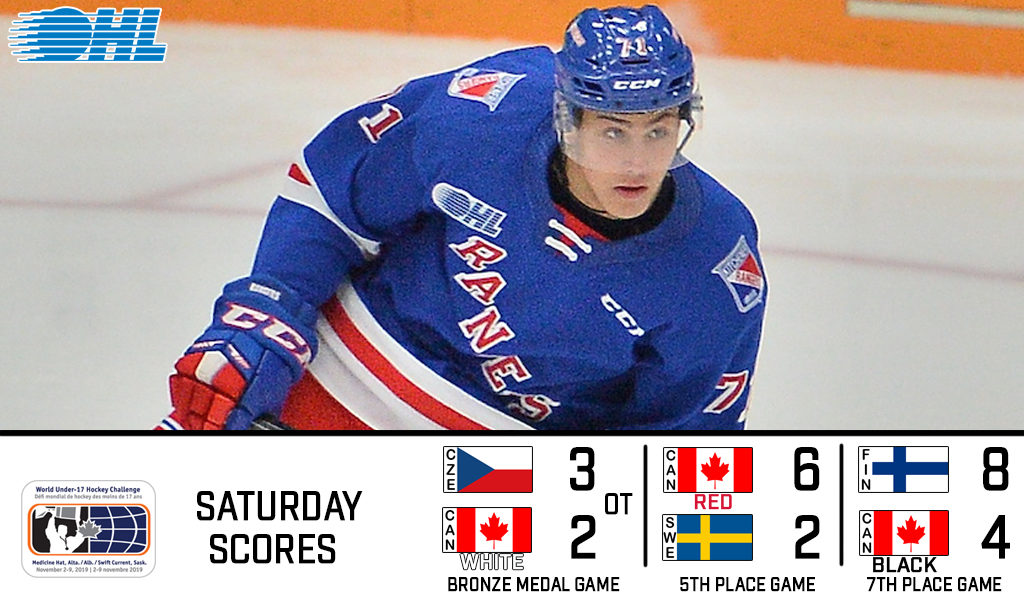 The 2019 World Under-17 Hockey Challenge wrapped up in Medicine Hat and Swift Current on Saturday with Canadian teams placing fourth, fifth and eighth in the annual clash of the world’s top under-17 talent. Here’s a complete look at Saturday’s action.

Matthew Savoie (Edmonton Oil Kings) tied things up on the power play with 2:22 remaining in regulation to force overtime, but Canada White would settle for fourth place on Rysavy’s winner.

“We were a little bit fatigued yesterday against the United States and I think today that fatigue really caught up to us, but we showed some pushback at the end coming back and tying the game,” said Canada White head coach Sylvain Favreau (Halifax Mooseheads). We had our chances in [overtime], so I don’t think there’s much more we could have done. Overall, we had a different approach with Team White where we were really putting emphasis on team principles and the betterment of everyone’s play, and I think that will be valuable for our players moving forward.”

The Czechs earn their third bronze in the history of the event.

Fifth-Place Game: Canada Red 6, Sweden 2
Swift Current, Sask. – Team Canada Red charged out to a 3-0 lead in the opening half of the first period, riding that advantage to a 6-2 victory to secure fifth place at the 2019 World Under-17 Hockey Challenge.

Seventh-Place Game: Finland 8, Canada Black 4
Swift Current, Sask. – Canada Black managed to outshoot Finland 45-25, but the Finns cashed in on their chances in an 8-4 victory to claim seventh place at the 2019 World Under-17 Hockey Challenge.

Finland jumped out to a 3-0 lead in the opening three-and-a-half minutes of the first period, setting the wheels in motion for their eventual victory as Canada Black was unable to recover.

Brandt Clarke (Barrie Colts) had a goal and an assist while Max McCue (London Knights) and Danny Zhilkin (Guelph Storm) had goals and Landon McCallum (Sudbury Wolves) chipped in with an assist.

Canada black settles for eighth place after what was a 3-0 start to the tournament.

Other Scores from Saturday: