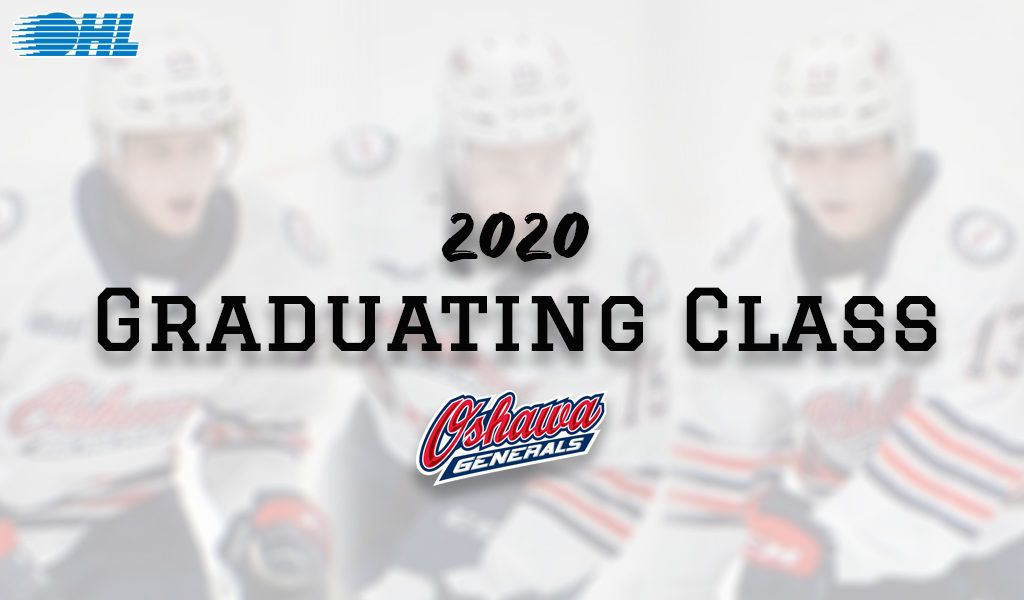 The Oshawa Generals put forth a strong showing this past season with much credit to their overage core.

Now that their final seasons have come and gone, Captain Kyle MacLean, power forward Brett Neumann and winger Cole Resnick are moving on from the OHL.

Kyle MacLean (Oshawa – 2015-2020)
A hardworking two-way centreman and a leader for the younger group to look up to, it’s no wonder Kyle MacLean was awarded the C on his sweater in his fourth year. A fourth round draft pick in the 2015 OHL Priority Selection, the Basking Ridge, N.J. native put forth 156 points (51-105—156) over 278 games with the Gens and had an impressive postseason in 2019 with 13 points (5-8—13) in 15 games. He finished fifth in Oshawa scoring this past season, posting 46 points (13-33—46) in 51 games played. MacLean is the son of decorated former NHL star John MacLean, who was a General himself in the early 80s. The 20-year-old signed an AHL contract with the Bridgeport Sound Tigers last summer before making the return to Oshawa for his overage year.

Brett Neumann (Erie, Kingston, Oshawa – 2015-2020)
Seasoned centreman Brett Neumann graduates as one of the league’s top producers over the 2019-2020 season. He also holds a new OHL record for most consecutive games played, wrapping up his tenure on a 311-game run dating back to November 2015. His overage year in Oshawa saw an 83-point showing, good for second in Oshawa scoring, and his 45 markers on the campaign placed him fifth in goals among all OHL skaters. With time split between the Erie Otters, Kingston Frontenacs and Generals, Neumann totaled 244 points (128-116—224) over 318 appearances. The native of Toronto was selected by the Otters in the third round of the 2015 OHL Priority Selection and emerges a free agent with past invites to the Toronto Maple Leafs’ and New York Islanders’ development camps.

Cole Resnick (Oshawa – 2017-2020)
Winger Cole Resnick ended up with an extended stay on the ice in Oshawa, rejoining the squad midway through the season and finishing off his overage season on the active roster. The 20-year-old native of Thornhill, Ont. was slated for a spot on the team’s coaching staff this season but retained his rights as an overage player after fellow overage forward Daniel Walker suffered a season-ending injury. Resnick skated in 115 games with the Generals over three seasons, chipping in for 19 points (6-13—19) that include six assists in his 30-game overage stint. He signed with the Gens as a free agent in 2017 after a strong season with the OJHL’s Mississauga Chargers.