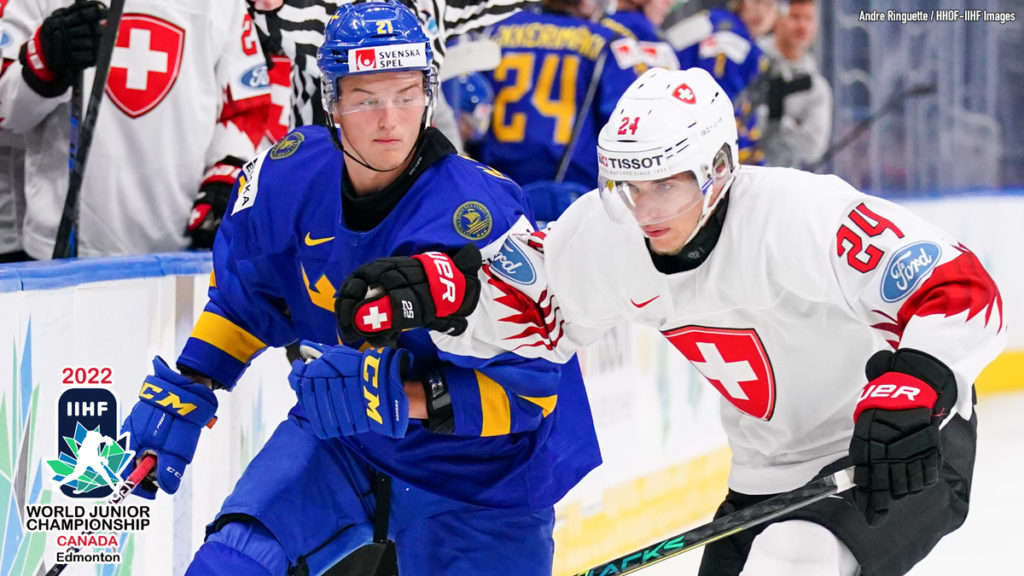 Canada will play its second game of the tournament on Day 3 of the 2022 World Juniors while a number of other CHL players will be in action throughout the day.

The hosts will battle Slovakia as they look to make it two straight wins as more than 50 CHL players are expected to be in action.

It’s going to be a busy one for CHL players.

Czechia, who have the second most CHL players on its roster, edged past Slovakia 5-4 Tuesday in the first game of the tournament as captain Jan Mysak (HAM) and Michal Gut (EVE) each had one goal and one assist. Acadie-Bathurst’s Jan Bednar stopped 25 shots in the Czechia goal while Gabriel Szturc (KEL) had the game-winner with 1:50 left in regulation.

Kingston’s Leevi Merilainen, the only CHL player on Finland’s roster, stopped 19 of the 20 shots he faced as his side beat Latvia 6-1 two days ago.

Canada (1-0-0) and its 23 CHLers will then take centre stage for the second time as they face Slovakia. Canada were pushed by Latvia Wednesday but wound up 5-2 winners as Connor Bedard (REG) and Ridly Greig (BDN) each had one goal and one assist.

Slovakia’s (0-1-0) Matej Kaslik (CHI) had two goals against Czechia while Servac Petrovsky (OS) also found the back of the net and added an assist in their opener Tuesday.

Switzerland (0-1-0) lost their tournament opener 3-2 to Sweden Wednesday while the USA (1-0-0) began their title defence with a comfortable 5-1 victory over Germany Tuesday night as Sasha Pastujov (GUE) had two assists.

McTavish would register two shots on goal, was a +1 and played 18:55 across 20 shifts. He centered the team’s top line alongside Bedard and Joshua Roy (SHE).

This tournament caps a wild 12 months for McTavish who has played in the NHL, AHL, OHL, Olympics and now the World Juniors over the past year.

The CHL's leading goalscorer in 2021-22 has his first! #WorldJuniors | @SJSeaDogs pic.twitter.com/zPGkaL30mx

Two different Halifax Mooseheads scored Wednesday; Attilio Biasca got on the scoresheet for Switzerland in their loss to Sweden while Senna Peeters found the back of the net for Austria in a 4-2 defeat to Germany.

Fabian Lysell (VAN) tallied an assist for Sweden in their 3-2 victory over Switzerland.