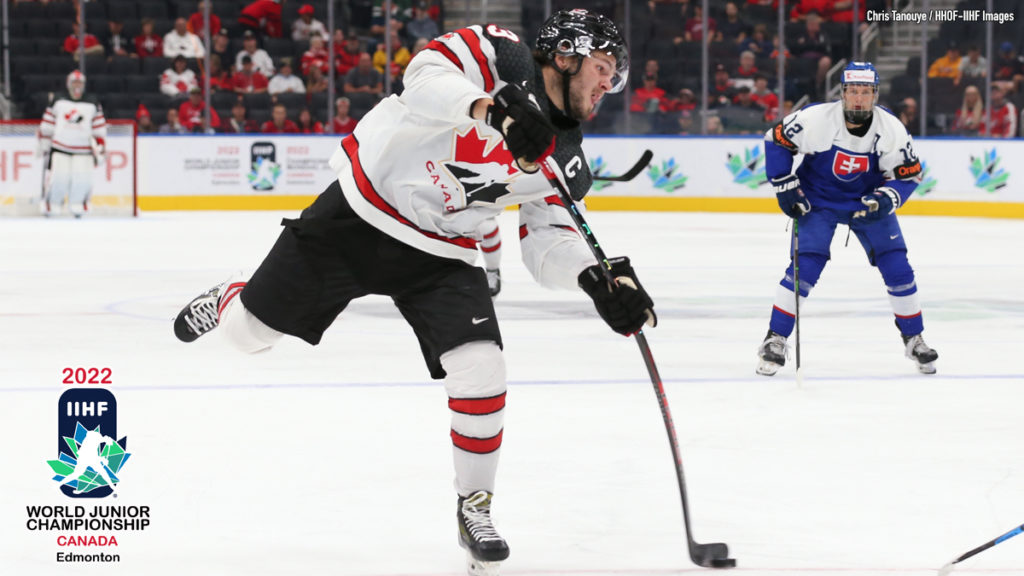 It’s the lightest day of the tournament thus far with just two round-robin games on the schedule for Day 4 of the 2022 World Juniors.

The first contest of the day will see just three CHL players in action. Austria (0-1-0) is represented by Halifax’s Senna Peeters, who scored in Wednesday’s loss to Germany, while Fabian Lysell and Oskar Olausson (OSH) will suit up for Sweden (1-0-0). Lysell recorded an assist Wednesday as Sweden opened the tournament with 3-2 win over Switzerland.

Slovakia (0-2-0) will look to rebound immediately after they were hammered 11-1 by Canada last night. Chicoutimi winger Matej Kaslik has three goals in two games for the Slovaks, who lost their first game of the tournament to Czechia Tuesday.

Latvia (0-2-0) had Thursday off but had opened the tournament with back-to-back losses to Finland (6-1) and Canada (5-2). Medicine Hat d-man Bodgans Hadass has one goal and one assist in a pair of games.

It’s a pivotal contest for both nations; the loser will be eliminated from the tournament.

Owen Sound’s Servac Petrovsky is the only Slovak to own a positive +/- rating at +1. In two games, Petrovsky has one goal and one assist while his eight shots are the second most on the team behind Kaslik’s 12.

Petrovsky was a sixth-round selection by the Minnesota Wild in the 2022 NHL Draft after he registered 28 goals and 54 points in 65 games as a rookie last season in the OHL.

Mason McTavish stole the headlines Thursday as he scored four times in Canada’s 11-1 demolition of Slovakia.

“It’s pretty cool for sure,” said McTavish, who also had two assists. “Special moment. Obviously, credit to my teammates. They were looking for me all game.”

A special performance from a special player.

Joshua Roy (SHE) scored once and added three assists in the victory while Brennan Othmann (FLNT), in his tournament debut, added a goal and two helpers.

After he buried 5⃣0⃣ last season, Brennan Othmann gets his first at the #WorldJuniors! @FlintFirebirds pic.twitter.com/VHHuaxgiaX

In the day’s first game, Leevi Merilainen backstopped Finland to a 4-3 shootout win over Czechia.

Attilio Biasca, who scored in Switzerland’s first game of the tournament, collected an assist in a 7-1 loss to the USA in Thursday’s final game.