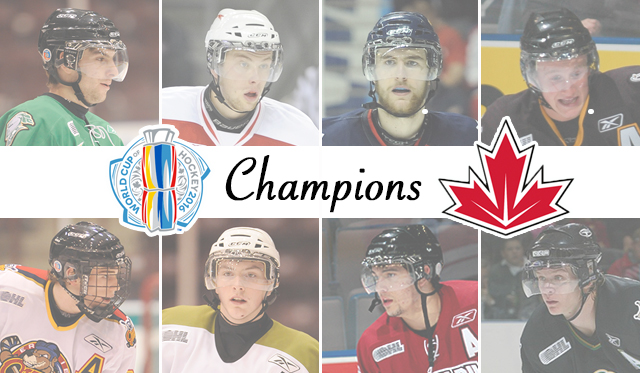 Brad Marchand (Boston Bruins/Halifax Mooseheads) scored inside the final minute of the third period, bringing the Air Canada Centre to its feet as Canada secured the World Cup of Hockey Championship with a 2-1 win over Team Europe.

Goaltender Carey Price (Montreal Canadiens/Tri-City Americans) made 32 saves in the win, being beaten just once on the night on a shot off the stick of Zdeno Chara (Boston Bruins/Prince George Cougars).

“Just crazy the way everything worked out,” Crosby said post-game. “When you get a penalty that late in the game you’re just trying to force overtime and then Marchy comes down and buries one like that. Pretty unbelievable feeling considering how hard we had to work to get our chances here tonight. It wasn’t easy.”

Crosby, who led the Pittsburgh Penguins to a Stanley Cup title last season, was one of six QMJHL graduates on the roster while 11 OHL grads and five former WHL standouts rounded out the 22 CHL graduates.

Canada played to an overall record of 6-0 in the tournament, defeating Russia 5-3 in the semi-finals before edging Europe 3-1 and 2-1 in their two championship matchups.

The win was Canada’s 16th straight best-on-best victory, a run of success that dates back to the preliminary round of the 2010 Olympics.

For more information on the World Cup of Hockey, please visit WCH2016.com.