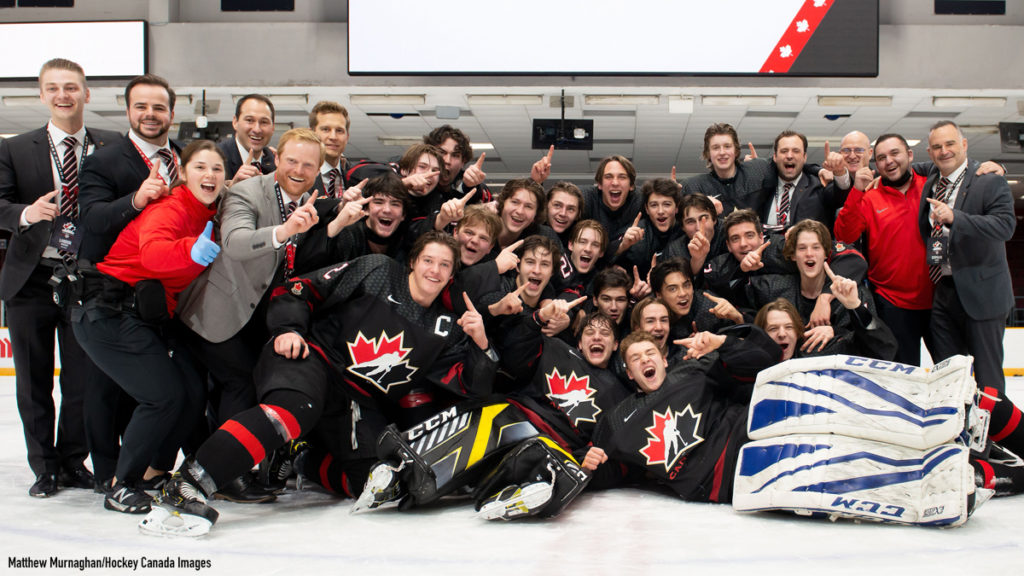 Canada Red fought back from two different deficits in the game as Owen Outwater (North Bay Battalion) had a goal while Easton Cowan (London Knights) and Olivier Savard (Saginaw Spirit) each contributed with assists.

Mason Vaccari (Kingston Frontenacs) made 30 saves for the win in goal.

Easton Cowan (London Knights) was the OHL’s top scorer on Canada Red as he finished with four points (2-2–4) across five games.

Canada White climbed ahead 3-0 in the first period, outshooting their opponents 22-3 in the opening frame. Bertucci would open the second period with a shorthanded goal to stretch the lead to four.

Emma Maltais got the National Women’s Team on the board midway through the third period before Soto hit the empty net to finish things off.

Soto finished as the OHL’s top scorer on Team White as he produced five points (2-3–5) in five contests.

GAME OVER | @emmamaltais17 took one back for 🇨🇦’s National Women’s Team in the third but goals from Matthew Soto and Mathieu Cataford helped 🇨🇦⚪️ to the 3rd place finish at the #CapitalCityChallenge.

Calum Ritchie (Oshawa Generals) picked up an assist on Benson’s winner, one of his two on the night. He was joined by Oliver Bonk (London Knights) with two helpers while Denver Barkey (London Knights) and Colby Barlow (Owen Sound Attack) also recorded assists.

Canada’s National Women’s Team trailed 3-0 entering the second half of the second period before goals in a span of under four minutes from Brianne Jenner, Sarah Fillier and Micah Zandee-Hart drew things even.

Joseph Costanzo (Niagara IceDogs) stopped 17 of 20 in the Canada Black crease as they outshot their opponents 50-20. Anne-Renee Desbiens was a difference maker, turning aside 46 shots.

GAME OVER | Only 11 seconds into overtime, @ZachBenson2020 scored to send 🇨🇦⚫️ to the #CapitalCityChallenge final tomorrow night!

Carey Terrance (Erie Otters) had an assist for Team White in the loss as they’ll square off against Canada’s National Women’s Team in Wednesday’s third place game at 2:30pm.

GAME OVER | 🇨🇦🔴 have booked its ticket to the #CapitalCityChallenge final! It will face the winner of 🇨🇦⚫ 🆚 🇨🇦’s National Women’s Team tonight at 7 p.m. ET/ 4 p.m. PT.

CANADA BLACK 10, CANADA WHITE 5
Calum Ritchie‘s (Oshawa Generals) three goals and two assists paved the way to a 10-5 Team Black victory, closing out a perfect 3-0 preliminary round for the darkshirts.

Ethan Miedema (Windsor Spitfires) and hometown product Chris Barlas (Ottawa 67’s) both had assists for Team White in the loss as they played to a 1-2 mark in the round robin.

Mason Vaccari (Kingston Frontenacs) was the winner in goal, making 20 saves opposite Team White’s Nathaniel Day (Flint Firebirds) who made 23.

The preliminary round is concluded, setting the stage for semi-final matchups on Tuesday as Canada Red faces Canada White at 2:30pm followed by Canada Black taking on the National Women’s Team at 7:00pm.

Lardis recorded a goal and an assist on the night and was joined by Alex Pharand (Hamilton Bulldogs) and Oliver Bonk (London Knights) with helpers.

Joseph Costanzo (Niagara IceDogs) carried a shutout into the final five minutes of action before Brianne Jenner put the National Women’s Team on the board with 3:04 remaining. Costanzo would stop 14 of 15 for the win.

CANADA RED 4, CANADA WHITE 2
Canada Red went 3-for-8 on the power play to defeat Canada White 4-2 on Sunday afternoon. Brayden Yager (Moose Jaw Warriors) had a goal and an assist while Etienne Morin (Moncton Wildcats) chipped in with a pair of helpers.

GAME OVER | Matthew Wood’s two goals and one assist secured 🇨🇦🔴 a 4-2 victory over 🇨🇦⚪️.

TEAM RED 7, NATIONAL WOMEN’S TEAM 0
Carson Rehkopf (Kitchener Rangers) and Easton Cowan (London Knights) both had a goal and an assist as Team Red blanked the Canadian National Women’s Team by a score of 7-0.

The win was a bounce-back effort for Team Red following a 7-2 loss to Team Black on Friday night. Blueliners Olivier Savard (Saginaw Spirit) and Quinton Burns (Kingston Frontenacs) both picked up assists as Team Red outshot their opponents 43-22.

Ritchie had a goal and a helper while Allen picked up two assists. Owen Sound Attack forward Colby Barlow found the back of the net while London Knights teammates Denver Barkey and Oliver Bonk, as well as Hamilton Bulldogs forward Alex Pharand each had assists.

Ottawa 67’s forward Luca Pinelli was one of the bright spots for Team Red, scoring a goal in the loss.

GAME OVER! Three 3rd period goals and 28 saves from @MasonVaccari helped 🇨🇦⚫ to a 7-2 win over 🇨🇦⚪ in its opening #CapitalCityChallenge matchup.

TEAM WHITE 7, NATIONAL WOMEN’S TEAM 3
Luke McNamara (Saginaw Spirit) found the back of the net with 1:23 remaining in regulation while Luke Misa (Mississauga Steelheads), Ethan Miedema (Windsor Spitfires) and Matthew Soto (Kingston Frontenacs) each picked up an assist in a 7-3 win over the Canadian National Women’s Team. Nathaniel Day (Flint Firebirds) stopped 16 of the 19 shots he faced for the win.

Team White took the shooting column 48-19 and went 2-for-3 on the power play.

GAME OVER | @pou29 took two back for 🇨🇦’s National Women’s Team in the 3rd but goals from 7 different scorers gave 🇨🇦⚪ a 7-3 victory in the opening #CapitalCityChallenge game.