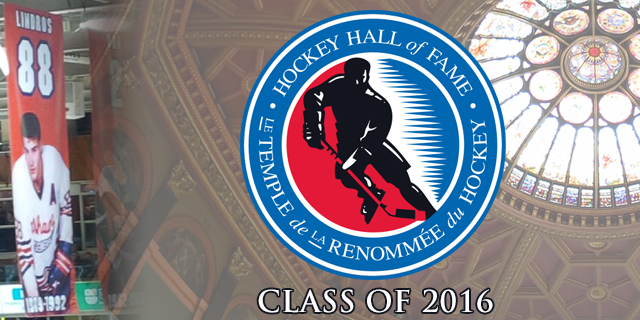 The Canadian Hockey League is proud to announce that three CHL alumni are among the class of 2016 Hockey Hall of Fame inductees.

The vote took place on Monday at the annual meeting of the Selection Committee in Toronto.

A native of London, ON, Lindros was a dominant force throughout much of his playing career. The big centre helped lead the Oshawa Generals to a MasterCard Memorial Cup title as a 16-year-old in 1990, being named to the tournament all-star team. Lindros recorded 97 goals, 119 assists and 216 points in 95 regular season games over parts of three seasons in Oshawa from 1989-92, being selected first overall by the Quebec Nordiques in the 1991 NHL Draft.

“I was very fortunate to have coaches, teammates, billets and parents who supported me throughout my career.” said Lindros. “It also takes a lot of luck to get to the NHL.”

Lindros’ decorated junior career included a Red Tilson Trophy as OHL Player of the Year, an Eddie Powers Trophy as the league’s leading scorer, and CHL Player of the Year honours in 1991. Following a trade to the Philadelphia Flyers, Lindros played a 760-game NHL career, recording 372 goals, 493 assists and 865 points while claiming both the Hart Trophy and Ted Lindsay Award in 1995.

A contributor to the game of hockey dating back to his playing days that began in 1958 spanning over five decades to his final season coaching in the NHL in 2009-10, Pat Quinn passed away in November 2014 and will be remembered as one of the game’s greats.

A Hamilton, ON, native, Quinn played with the OHA’s Hamilton Tiger Cubs and Red Wings from 1958-62 before one season with the CAHL’s Edmonton Oil Kings where he won a Memorial Cup in 1963. Quinn’s ensuing nine-year NHL career included stints in Toronto and Vancouver before he spent his final five seasons with the Atlanta Flames. Quinn played in 606 career NHL contests, recording 18 goals, 113 assists and 131 points.

Upon retirement, the big defenceman embarked on a coaching career that spanned parts of 17 seasons spent between Philadelphia, Los Angeles, Vancouver, Toronto and Edmonton. Quinn also had extensive involvement with Hockey Canada coaching the Men’s National Team to gold at the 2002 Olympics in Salt Lake City while also winning the World Cup of Hockey in 2004, a World Under-18 Championship in 2008 and World Junior Gold in 2009.

“Being recognized by Pat’s hockey peers is truly a great honour,” said his wife, Sandra Quinn. “I’m proud of Pat and what he accomplished.”

Also included in the 2016 Hockey Hall of Fame induction class is goaltender Rogie Vachon, a graduate of the OHA’s Montreal Jr. Canadiens in 1964 before a 16-year NHL career spent between Montreal, Los Angeles, Detroit and Boston.

Vachon won three Stanley Cups over his first six NHL seasons with the Canadiens, winning the Vezina Trophy in 1968. After being traded to the LA Kings in 1971, he continued his stellar career for 11 more seasons before retiring to become an NHL coach and executive.

“I was very lucky to play for the Montreal Canadiens at the start of my career,” said Vachon. “My first shot on net was a breakaway by Gordie Howe. I stopped it and it kept me in the league for 16 more years.”

Established in 1943, the Hockey Hall of Fame’s (“HHOF”) mandate is to recognize and honour the achievements of players, builders and officials who bring special distinction to the game of hockey, and to collect, preserve, research and exhibit objects, images and resource materials connected with the game as it is played in Canada and throughout the world. As a non-profit corporation and a registered charity under the Income Tax Act, HHOF owns and operates a museum and place of entertainment offering state-of-the-art exhibits, multimedia presentations and educational programming from its premises at Brookfield Place, Toronto, Canada.