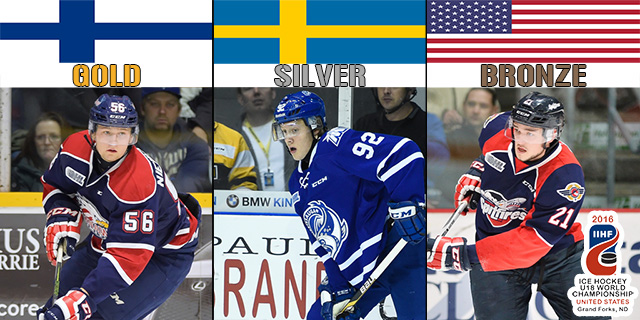 The Finns claim gold for the first time since 2000, exploding out of the gate for a 3-0 lead after one period before outshooting Sweden 34-18.

The United States skated to a 10-3 victory over Canada to claim bronze and medal for the 13th straight year at the event. Logan Brown (Windsor Spitfires) led the way with two goals and an assist while Kailer Yamamoto (Spokane Chiefs) had a goal and two assists.

Brown (3-9–12) and Yamamoto (7-6–13) both finished among the tournament scoring leaders following the conclusion of the seven game schedule.

CHL PLAYERS THAT EARNED MEDALS AT 2016 WORLD UNDER-18 HOCKEY CHAMPIONSHIP:

For more information on the 2016 World Under-18 Hockey Championship, please visit hockeycanada.ca or iihf.com.