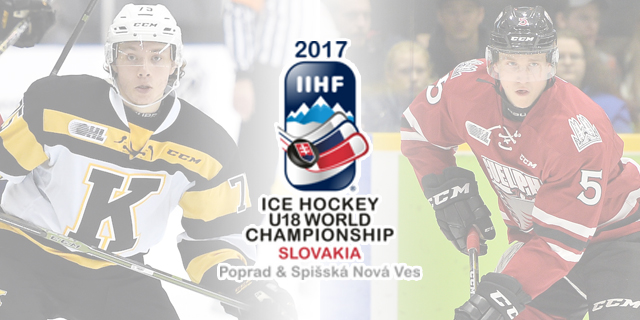 Four OHL players have earned medals at the 2017 IIHF World Under-18 Hockey Championship in Poprad and Spisska Nova Ves, Slovakia.

Draft eligible talents Linus Nyman and Eemeli Rasanen of the Kingston Frontenacs claimed Silver with Finland following a 4-2 loss at the hands of the United States in Sunday’s Gold Medal Game.

The Gold finish is the third in the past four years for the United States.

Rasanen, who competed in the 2017 Sherwin-Williams CHL/NHL Top Prospects Game this past January, scored a goal in the loss as Finland earned a spot on the podium for a third straight year.

Two OHL players captured Bronze with Russia in a 3-0 blanking of Sweden.

Chehkovich was the lone CHL player in the event named to the tournament all-star team as selected by members of the media while defenceman Mark Rubinchik (Saskatoon Blades) was named one of Russia’s top three players in the tournament.

The Bronze is Russia’s first medal at the event since 2011.

A total of 15 OHL players competed in the annual event including nine who competed for Canada in a fifth place finish following a quarterfinal loss to Sweden.

The 2018 IIHF World Under-18 Hockey Championship will take place in Chelyabinsk and Magnitogorsk, Russia.

For more information on the 2017 IIHF World Under-18 Hockey Championship, please visit IIHF.com or HockeyCanada.ca.