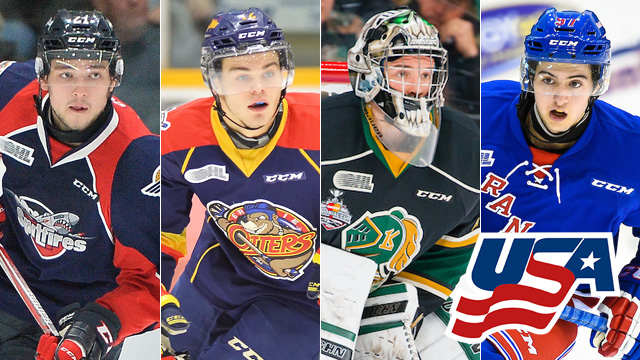 Toronto, ON – The Ontario Hockey League announced that 4 OHL players have been named to the preliminary roster for the 2017 U.S. National Junior Team that will compete in the 2017 IIHF World Junior Championship December 26 to January 5 in Montreal and Toronto.

A total of 27 players were chosen by USA Hockey to attend training camp including four players from the Ontario Hockey League and one from the Western Hockey League.

The U.S. National Junior Team Selection Camp takes place Dec. 16-20 at HarborCenter in Buffalo, New York, followed by an additional camp in Oshawa, Ontario, from Dec. 20-24. The U.S. will play pre-tournament games Dec. 21 against Switzerland at the Tribute Communities Centre in Oshawa, Ontario, and Dec. 23 against the Czech Republic at the Rogers K-Rock Centre in Kingston, Ontario.

The U.S. will compete in a group with Canada, Russia, Slovakia and Latvia and opens the preliminary round of the 2017 IIHF World Junior Championship on December 26 against Latvia.

Complete ticket information for the 2016 IIHF World Junior Championship can be found at worldjunior2017.com.

2019-20 Recaps
Friday Highlights: Steelheads swimming up the Central
5 hours ago