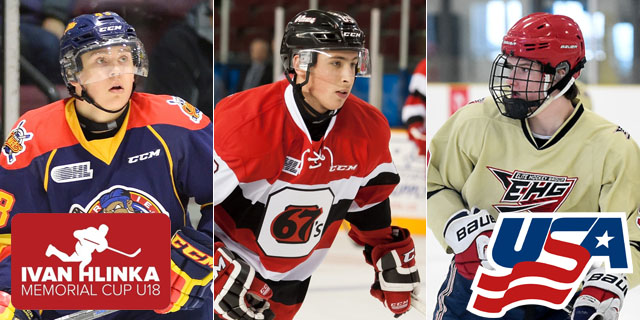 Niagara IceDogs CHL Import Draft selection Ondrej Machala scored with seven minutes remaining in the third period to give the Czech Republic a 4-3 lead, one they’d hold to claim their first gold medal in the history of the Ivan Hlinka Memorial Tournament.

Sasha Chmelevski (Ottawa 67’s) added a goal to his impressive total to finish with the tournament lead in scoring with five goals, five assists and 10 points in five games.

The two clubs entered the third period knotted at three before Machala’s winner secured the victory.

The United States narrowly missed out on their first gold at the Ivan Hlinka since 2003, claiming a medal for the third time in the past four years.

In bronze medal action, Russia defeated Sweden by a score of 6-3. Russia claims its second straight bronze while Sweden places fourth in the tournament.

Russian defenceman Dmitri Samorukov (Guelph Storm), who is committed to the OHL for the 2016-17 season, earned a bronze medal.