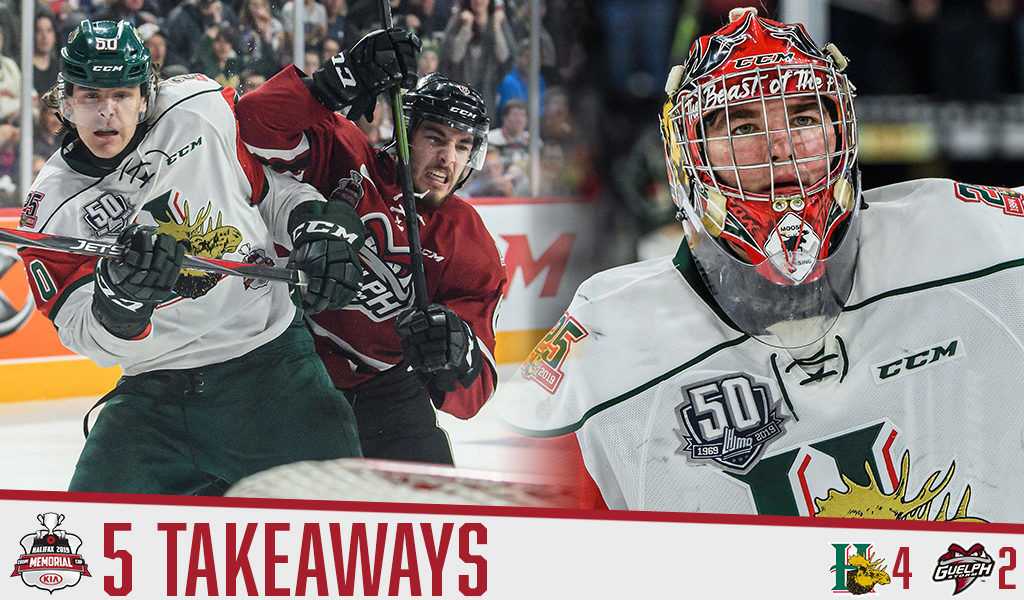 A second consecutive win in round robin action at the 2019 Memorial Cup presented by Kia guaranteed the host Halifax Mooseheads a spot in the semi-final after the squad handed the Guelph Storm their first loss in their past six outings following a 4-2 win Sunday.

Here are five key takeaways from the weekend thriller:

Mooseheads captain Antoine Morand got it started early Sunday, cashing in from the door step just over five minutes into the opening frame to give his side an early 1-0 lead. It marked Morand’s second goal of the year-end tournament as he also scored in the team’s opener versus the Western Hockey League representing Prince Albert Raiders. The Mercier, Que., native hopes to guide the Mooseheads to the Memorial Cup, where if doing so he’ll become a repeat champion after winning it all last spring with the Acadie-Bathrust Titan, where he also played alongside Mooseheads regular season leading scorer Samuel Asselin.

Lavoie shines on the big stage

While much of the focus on the Mooseheads goes to the team’s wily veterans, the next wave has also been key contributors, including draft-eligible right-wing Raphael Lavoie, who took advantage of his latest opportunity to show off for scouts Sunday when he picked a corner from in tight on a shorthanded beauty that gave the Mooseheads their second goal on just 11 shots. It ultimately served as a big-time boost for the Mooseheads, who withstood a bevy of chances by Guelph on the man advantage just prior before Lavoie turned the tables. A native of Chambly, Que., Lavoie is the top ranked draft-eligible player competing in the 2019 Memorial Cup presented by Kia, slotted 20th among North American skaters per NHL Central Scouting.

The Los Angeles Kings have reason to be excited about up-and-coming defenceman Sean Durzi, who found the back of the net for the Storm twice Sunday. The initial marker came with less than one minute remaining in the opening frame when Durzi beat Mooseheads netminder Alexis Gravel with a rising point blast to even the score entering the first intermission. The budding blue-liner then added Guelph’s second of the night when he walked in on the power play early into the third period to pull his team within a goal. The momentum was short lived, however, as Asselin replied for the Mooseheads just over six minutes later.

After notching a trio of assists in the tournament opener, Mooseheads left-wing Maxim Trepanier got right back on the score sheet Sunday with a fortuitous tally from behind the net as he banked the puck off of Storm goaltender Anthony Popovich and into the cage. The tally built the Mooseheads’ lead to 3-1 and stood as the eventual game winner. Added from the Gatineau Olympiques in hopes of taking a shot at CHL supremacy, Trepanier was one of the Mooseheads top performers in the playoffs as he wrapped up the 2019 postseason with six goals and 14 assists in just 22 appearances, trailing only Lavoie for the team lead.

While the Storm were the designated home team Sunday, added advantages like a last line change weren’t enough to overcome a raucous Halifax crowd of more than 10,000 strong that cheered on its hometown Mooseheads. This season, the Mooseheads were one of the top teams on home ice, finishing with 24 victories, second only to the top-seeded Rouyn-Noranda Huskies, who had three more. That home field advantage continued in the playoffs, where the Mooseheads came out on the winning side in eight of their 12 contests. The Mooseheads next opportunity to play before the home crowd comes Wednesday versus the Huskies.