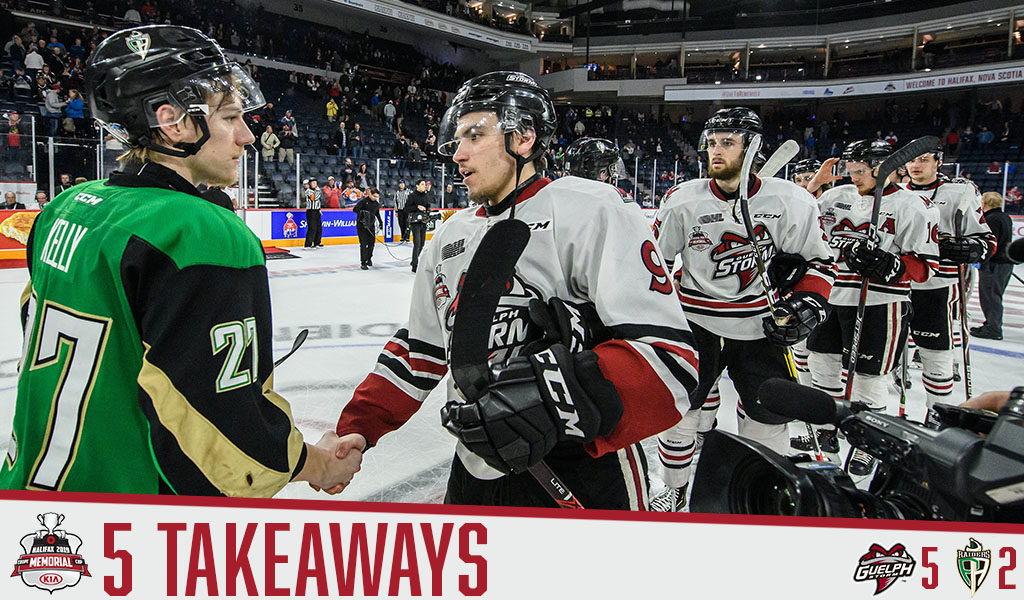 After winning the franchise’s first Ed Chynoweth Cup title as the Western Hockey League playoff champions for the first time in 34 years, the Prince Albert Raiders couldn’t translate that success to the 2019 Memorial Cup presented by Kia as the team dropped all three of its round robin contests with the dagger coming Tuesday in a 5-2 loss to the OHL champion Guelph Storm.

Philadelphia Flyers fans must be pleased with draft pick Isaac Ratcliffe, the Storm captain who put on a show when he stepped around the Prince Albert defenders before tucking it five-hole on netminder Ian Scott to give his side a 2-1 margin. After collecting a pair of helpers in earlier round robin action, the tally marked Ratcliffe’s first goal and third point of the tournament. One of just six OHL skaters to reach the 50-goal plateau this season, there was no slowing down Ratcliffe in the postseason as he potted another 15 goals and 15 assists in only 24 contests and now looks to guide the Storm to the franchise’s first CHL crown.

After turning heads in the regular season with an 89-point performance – a 57-point increase from his previous career high – Raiders right-wing Brett Leason failed to find the score sheet across all three round robin contests as he finished with 12 shots and a minus-4 stat line. On Tuesday, Leason directed eight shots toward Huskies netminder Samuel Harvey but couldn’t find the back of the net. Still, the 20-year-old Leason, who went unselected in past two NHL drafts, is earmarked for early selection into the NHL this summer, with the final report by Central Scouting ranking him 25th among North American skaters.

Though it’s difficult to point the finger at the goaltender when his team musters up just six goals across three round robin games, the lagging offense left the Raiders needing Scott to steal a victory for his squad, but it was not to be. After wrapping up the 2018-19 season with 38 wins in 49 appearances, including a league-leading eight shutouts, Scott was just as dominant in the playoffs, but was unable to carry that forward to the final round. The Toronto Maple Leafs prospect concludes the 2019 Memorial Cup presented by Kia going winless in three games, but can still hang his hat on claiming the Del Wilson Trophy as the WHL Goaltender of the Year.

There’s been no slow down from Nick Suzuki as the Montreal Canadiens prospect collected another three points Tuesday, including a pair of tallies, with the first coming from in tight on Scott before he then added a highlight reel goal on a partial wraparound in which he dished from behind the net and banked in his second goal of the night. Across three round robin games, Suzuki has recorded three goals and two assists, continuing his torrent pace from the OHL postseason that saw him notch 16 goals and 26 assists for a franchise-record 42 points in a single playoff run as he was named the recipient of the Wayne Gretzky ’99’ Award as the OHL playoff MVP.

An early exit by the Raiders means Thursday’s tiebreaker match has been wiped from the docket, with semi-final action then getting under Friday following the conclusion of the round robin two days prior. This year, the Raiders became the 24th team to lose all three games in the round robin since the current tournament format was adopted in 1983, meaning that the tiebreaker has only come into play about 35% of the time, with the last occurrence dating back to 2015 when the Quebec Remparts knocked out the Rimouski Oceanic before ultimately falling in the semi-final the following night.