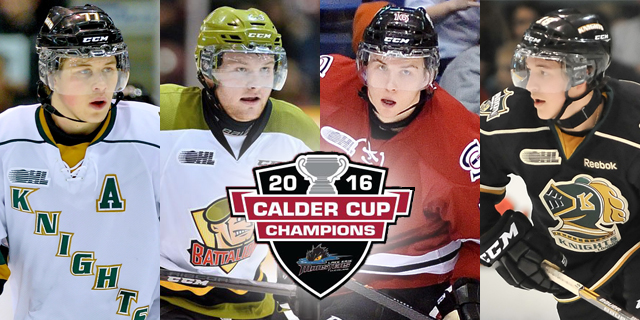 Six OHL graduates are Calder Cup Champions with the Lake Erie Monsters following a 1-0 overtime victory over the Hershey Bears in Game 4 on Saturday night in Cleveland, OH.

Portland Winterhawks graduate and former WHL Player of the Year Oliver Bjorkstrand scored with 1.9 seconds remaining in overtime, putting a rebound past Hershey goaltender Justin Peters (Plymouth Whalers) from the side of the goal to give the Monsters their first AHL Championship in franchise history.

Bjorkstrand earned AHL Playoff MVP honours, recording 10 goals, six assists and 16 points over 17 games for the Monsters, an AHL franchise that has operated since 2007 and wraps up its first season as the affiliate of the Columbus Blue Jackets.

Of the six OHL graduates on the Monsters, four hoisted the J. Ross Robertson Cup during their tenure in the league.

Former London Knights Josh Anderson (2012, 2013) and Alex Broadhurst (2013) both won OHL titles in green and gold while veteran journeyman Steve Eminger was both an OHL and MasterCard Memorial Cup Champion with the Kitchener Rangers in 2003. 21-year-old winger Kerby Rychel was an OHL Champion with the Guelph Storm in 2014.

The Calder Cup returns to Cleveland for the first time since 1964, giving the city its 10th ever title following nine by the old Cleveland Barons franchise during its existence from 1936-72.

The Game 4 crowd of 19,665 is the largest to ever see a professional hockey game in the state of Ohio and the second-largest postseason crowd in AHL history.

For news and information on the American Hockey League, please visit theahl.com.