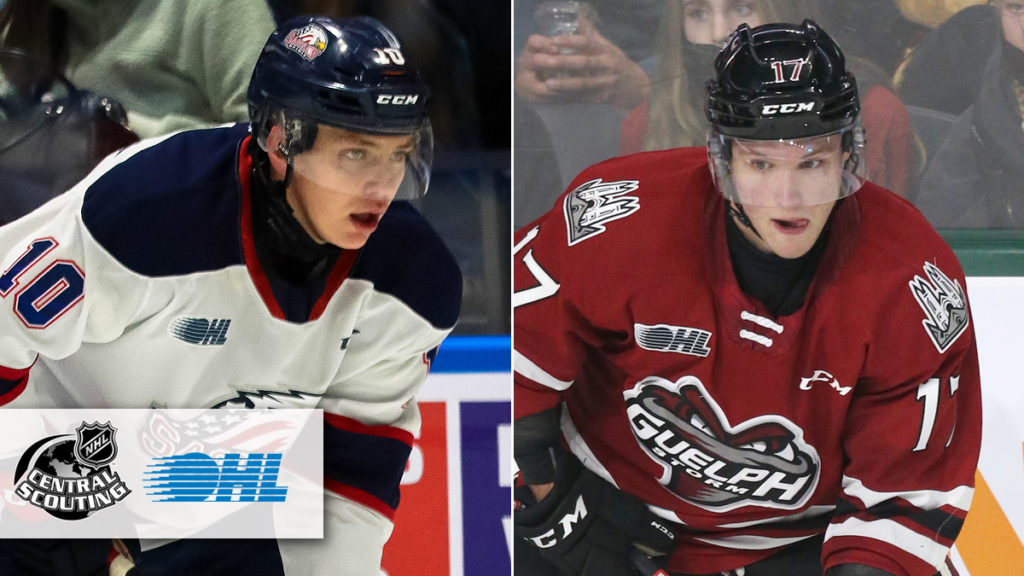 Toronto, Ont. – The Ontario Hockey League is proud to announce that 63 OHL players have been included on NHL Central Scouting’s November ‘Players to Watch’ List for the 2022 NHL Draft scheduled to take place July 7-8 in Montreal, Quebec.

Forwards Shane Wright of the Kingston Frontenacs and Matthew Poitras of the Guelph Storm remain ‘A’ rated prospects, and are joined this month by Storm centreman Danny Zhilkin and Saginaw Spirit blueliner Pavel Mintyukov in the top tier of draft eligible talent.

“Some players who are true first-year draft eligible players or did not have the opportunity to play in 2020-21 have been able to establish their game and others have displayed continued improvements and developments,” director of NHL Central Scouting Dan Marr said. “This update provides the opportunity to highlight some players whose game is trending in the right direction.”

NHL Central Scouting’s Joey Tenute had positive things to say about Zhilkin and Mintyukov, the OHL’s two newest additions to the ‘A’ category.

“It’s very evident just by watching him that Zhilkin is ahead of the curve at this point from a lot of prospects; he really plays a mature game,” said Tenute, who played four OHL seasons between Barrie and Sarnia from 2000-04. “He’s a top line player that plays in all situations for Guelph, so he’s a big part of his team and he’s a very strong skater.

“He had a good U-18 Worlds and showed his ability to play up and down the lineup while filling multiple roles in that tournament.”

Mintyukov has played big minutes for the Spirit this season, joining the franchise as the 52nd overall pick of the 2020 CHL Import Draft.

“I think [Mintykov’s] a very polished player,” Tenute said. “Coming over from Russia, and playing in a new league with new teammates, you don’t always know how quick a player is going to adapt but he’s a guy who’s come in and has had an immediate impact. He’s a top pairing defenceman who plays in every situation, crunches minutes, and excels on the power play.”

Nineteen of 20 OHL teams were represented on the list led by the London Knights with seven players ranked, the Guelph Storm with six including two ‘A’ rated skaters as well as the Niagara IceDogs and North Bay Battalion with five each.

Players have been identified using the following criteria:

For the complete list along with additional scouting reports, visit NHL.com.