67’s rolling in the East 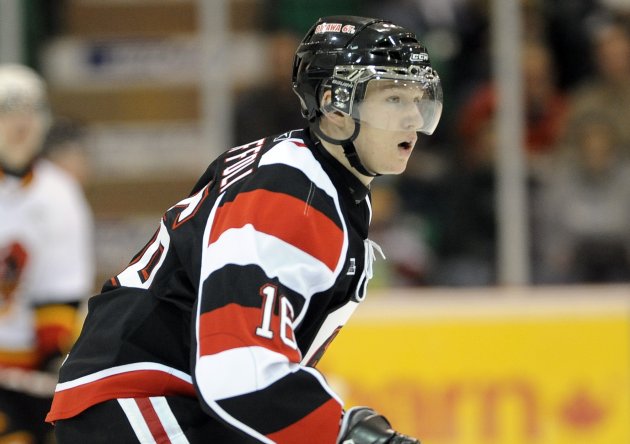 The Ottawa 67’s are scoring goals in bunches despite using a defence-first game plan and that combination has been paying off with a pile of wins lately.

The 67’s have won seven of their past 10 games, including a pair of conference wins over the Niagara IceDogs and Kingston Frontenacs last weekend to push their lead in the East Division standings to four points over the Oshawa Generals.

“My line’s playing great and it feels like all four of our lines are really doing well. We’ve just been playing hard and getting a lot of bounces and getting lots of wins.”

The 67’s top line of Toffoli with Shane Prince and Ryan Martindale has combined for 51 goals this season. They are the top three scorers in the Eastern Conference this season and are all among the top six scorers in the league.

“I think we all play the same kind of game,” said Prince, who scored the overtime winner against Niagara on Friday. “We see the time and space very well and we always know where each other is on the ice. We always find each other for goals. It’s great playing with them.”

It’s the 67’s second season under head coach Chris Byrne after Brian Kilrea retired in 2009 and despite having a conference-leading 111 goals through 27 games, the 67’s say that they are more focused on team defence.

“That’s the first thing we go over in practice is our defence,” Lindsay said. “We spend a lot more time on that than on offensive stuff.”

Toffoli said that the entire team has bought into the “our zone first” mentality.

“That’s where the play usually starts is in our own zone,” said Toffoli, a second round pick Los Angeles Kings in June. “All we want to do is get pucks out and forecheck hard. Once we’re down low, we’re cycling the puck. We’re getting a lot of opportunities and scoring.”

The 67’s have added some new faces over the past several weeks including defencemen Jake Cardwell and Julian Luciani as well as netminder Shayne Campbell. Some older faces are also contributing on a regular basis, including overagers Thomas Nesbitt and Cody Lindsay, who have both scored 12 goals this season.

The 67’s pulled off a 3-2 overtime win over the IceDogs at home on Friday then jumped out to a 5-0 first period lead en route to a 7-1 road win against the Kingston Frontenacs on Sunday.

“This was one of our tougher weekends playing conference teams and to get both wins really shows that we’re a competitive team,” Lindsay said.