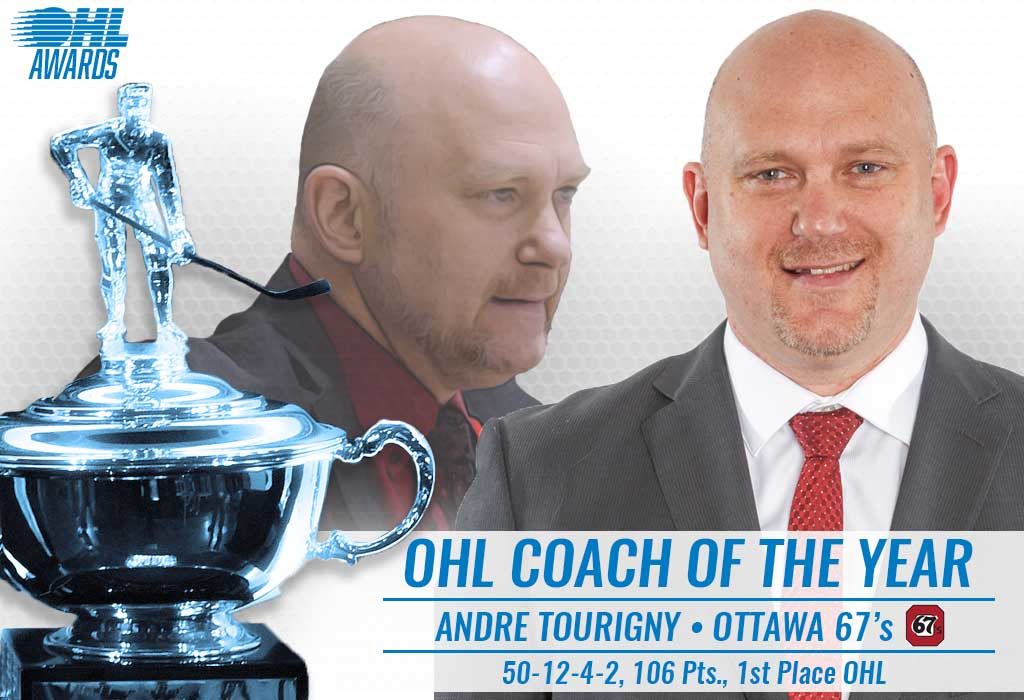 Toronto, ON – The Ontario Hockey League today announced that Andre Tourigny of the Ottawa 67’s is the 2018-19 recipient of the Matt Leyden Trophy awarded annually to the OHL’s Coach of the Year.

With Tourigny behind the bench the 2018-19 67’s set a new franchise record with 106 points to claim their fourth Hamilton Spectator Trophy as the OHL’s first place team.  They tied the franchise record of 50 wins set in 1983-84 with the league’s stingiest defence, one that surrendered just 183 goals.  The 67’s won a league-high 29 games on home ice including a string of 14 straight from December 28 to March 3. The 29 home wins are also the most by the club since 1982-83.

“It’s a tremendous honour that I share with all of our coaches (Mario, Norm, Charles, Derek, Evan, Kyle, Sean, Gordon and Marc) and our players,” Tourigny said. “I believe it reflects upon the environment our team provides to our players. Thanks to our owners, along with management staff James and Jan, we have the opportunity to work in a fantastic environment.”

Tourigny joined the 67’s as Head Coach and Vice President of Hockey Operations prior to the franchise’s 50th anniversary season in 2017-18.  The 44-year-old Nicolet, Quebec, native became the ninth coach in 67’s history with an impressive track record behind the bench primarily in the QMJHL where his career began as an Assistant Coach with the Shawinigan Cataractes in 1998.  He joined the Rouyn-Noranda Huskies as Head Coach and General Manager in 2002 where he spent 11 seasons and set a QMJHL record for most games coached with one franchise at 693 and earned Coach of the Year honours in 2005-06.  He moved up to the NHL ranks and spent two seasons as an Assistant Coach with the Colorado Avalanche from 2013-15, then one season with the Ottawa Senators in 2015-16.  He returned to the QMJHL for one season as Head Coach of the Halifax Mooseheads in 2016-17 before returning to the nation’s capital.

“Andre’s caring approach and tireless work ethic have resulted in every player on our team taking positive steps forward this season both on and off the ice,” said 67’s General Manager James Boyd. “Andre’s leadership and collaborative spirit have had a positive effect throughout our organization and for these reasons he is most deserving of the OHL Coach of the Year award.”

The Matt Leyden Trophy has been awarded annually to the OHL’s Coach of the Year as selected by his peers since 1972.  The award is in recognition of the contributions of Matt Leyden, past President of the Ontario Hockey Association from 1965-67, and former manager of the Oshawa Generals who spent more than 50 years with the team.

In a first round of balloting, teams vote for the top coaches within their own conference. The top three nominees from both the Eastern and Western conferences are declared finalists. A second round of voting is then conducted on a league wide basis where teams vote for any of the six finalists. At no time during the voting can a team select their own candidate. Coaches receive five points for a first place vote, three points for a second place vote and one point for a third place vote.

Tourigny led the voting process with 71 out of a possible 95 points ahead of runner-up Cory Stillman of the Sudbury Wolves who received 26 voting points, and Dale Hunter of the London Knights who finished in third place with 24 voting points.

He becomes the first 67’s recipient since the legendary Brian Kilrea who holds the league record with five Coach of the Year honours winning in 1981, 1982, 1996, 1997, and 2003.  Kilrea is one of 10 coaches who have won the award multiple times along with Bert Templeton, Terry Crisp, George Burnett, Craig Hartsburg, Peter DeBoer, Gary Agnew, Bob Boughner, Dale Hunter, and Mike Vellucci.  The five most recent recipients include Drew Bannister of the Soo Greyhounds in 2018, Ryan McGill of the Owen Sound Attack in 2017, Kris Knoblauch of the Erie Otters in 2016, Sheldon Keefe of the Soo Greyhounds in 2015, and D.J Smith of the Oshawa Generals in 2014.

The Matt Leyden Trophy will be formally presented to Tourigny at the 2018-19 OHL Awards Ceremony taking place on Wednesday June 5 at the Hockey Hall of Fame in Toronto.  He will be the OHL’s nominee for Canadian Hockey League Coach of the Year to be announced on Saturday May 25 in Halifax as part of the 2019 Memorial Cup presented by Kia.