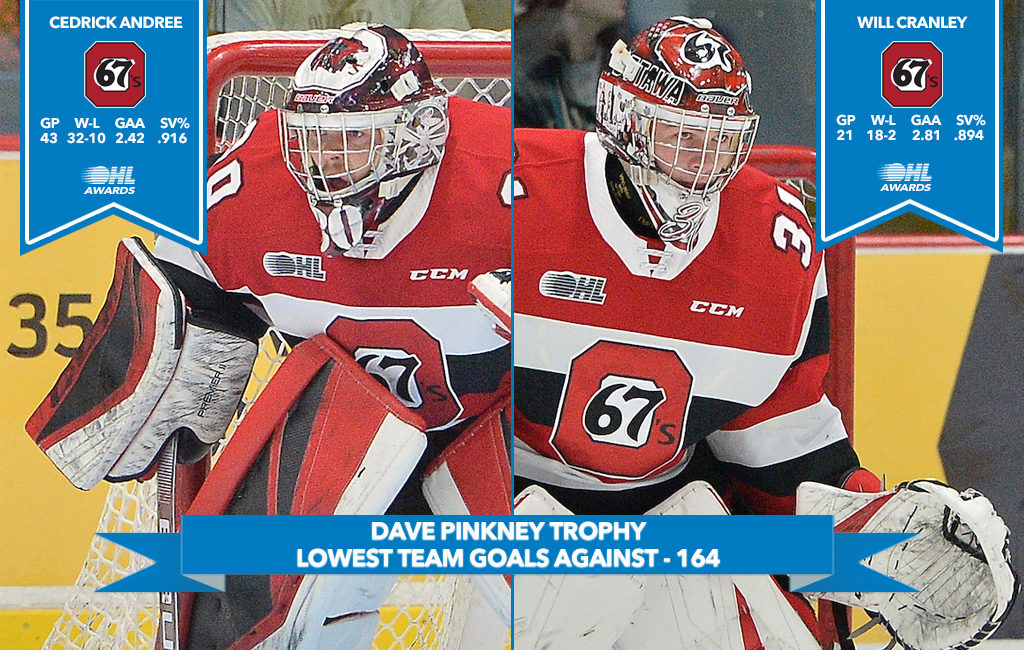 The Ottawa 67’s allowed the fewest goals in the OHL for the second straight season, surrendering just 164 over a 62-game schedule backstopped by the tandem of Cedrick Andree and Will Cranley.

Andree and Cranley guided the 67’s to a second consecutive Hamilton Spectator Trophy as OHL regular season champions as Ottawa played to an overall record of 50-11-0-1 for 101 points. It marks the third time in franchise history that the Barber Poles have won 50 games and the fifth time they’ve finished first overall in the regular season standings.

Andree finished with the League’s second-lowest goals-against average of 2.42, second-highest win total of 32 as part of a 32-9-0-1 record along with a .916 save percentage and four shutouts over 43 games. The 19-year-old from Orleans, Ont. was a 12th round (232nd overall) pick by the club in the 2016 OHL Priority Selection. He claimed the Pinkney Trophy alongside Michael DiPietro in 2018-19 and becomes the first back-to-back recipient since Mississauga’s JP Anderson won consecutively in 2010 and 2011.

This marks the seventh time the 67’s have led the league with the fewest goals against. They become the first back-to-back winners of the award since the Mississauga St. Michael’s Majors claimed the honours in both 2010 and 2011. It marks the second time that Ottawa has won the award in consecutive seasons as a trio of Craig Hillier, Seamus Kotyk and Tim Keyes combined to earn the distinction in both 1997 and 1998. Other 67’s netminders with their names engraved on the trophy include Darren Pang (1983-84), Greg Coram (1983-84), Jim Ralph (1980-81) and Michal Larocque (1971-72).

The Dave Pinkney Trophy is awarded annually to the goaltending tandem from the team that allows the fewest goals against during the regular season.