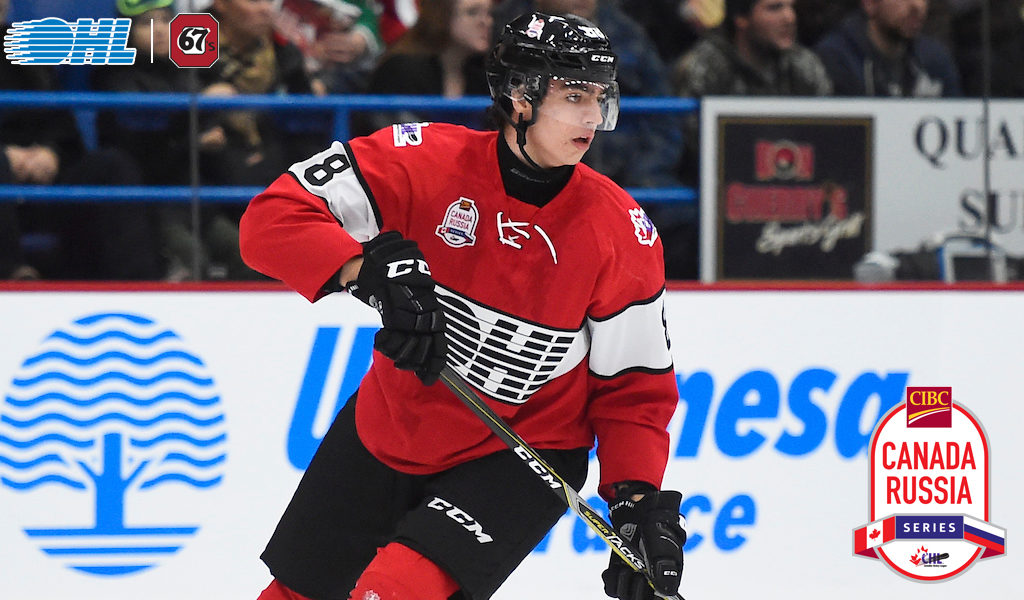 When Kevin Bahl hits the ice for Game 3 of the 2019 CIBC Canada Russia Series in Kitchener on Thursday, he’ll be the only third-year member of Team OHL in the lineup.

A mountain of a man at 6-foot-7 and 240Ibs., Bahl has been on Hockey Canada’s radar for a few years now, donning the maple leaf internationally three different times including the 2016 World Under-17 Hockey Challenge, the 2017 Hlinka Gretzky Cup where he won gold and the 2018 IIHF World Under-18 Hockey Championship.

Defenseman prospect Kevin Bahl is 6-foot-6, 230 pounds and is looking to make a big impression on the Arizona Coyotes.https://t.co/KA1U4420eg

Never one to put up much in the way of offensive numbers, Bahl scored a memorable goal in his first tour of duty with Team OHL back in 2017, lighting the lamp in a 5-3 win over Russia at the Sudbury Community Arena. He was back in the lineup last year in Oshawa and is looking forward to lacing them up a third time with the OHL’s top Canadian talent.

“Not many guys get the opportunity to do this three times,” he said with a laugh, “so I’m going to try and make the most of it. Being an older guy I’ll probably be counted on to make a difference out there so I’m ready for the challenge.”

Bahl will line up against fellow 67’s defenceman Nikita Okhotyuk who will represent his native Russia. The hard-hitting, shot-blocking Okhotyuk plays a similar defensive style to that of Bahl.

“He’s a big physical guy, so we’ll see if he can knock me off my feet,” Bahl jested.

A second round pick of the Arizona Coyotes in 2018, Bahl traditionally hasn’t been one for big offensive numbers, but he did increase his output from 18 points in 2017-18 to 34 last season. He’s registered nine points (2-7–9) through 16 games as a 19-year-old.

“Kevin is definitely a leader and a true defensive defenseman,” 67’s general manager James Boyd recently told Ryan Kennedy of The Hockey News. “He plays against top lines and is tough to play against. The offense is coming thanks to increased minutes.”

Bahl will join 67’s teammate Cedrick Andree in the lineup under Ottawa head coach Andre Tourigny on Thursday as Team OHL inherits a 4-2 series deficit in points following a pair of one-goal decisions for Team QMJHL in Saint John and Moncton.

Game 3 of the 2019 CIBC Canada Russia Series can be seen live on Sportsnet ONE and NHL Network when the puck drops at 7:00pm ET.