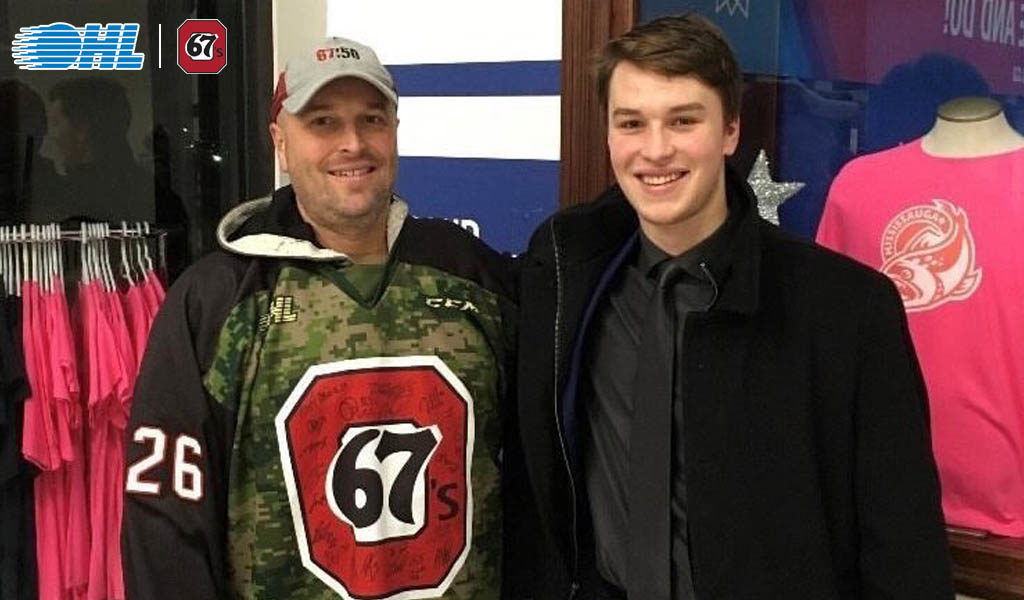 When Alec Bélanger wears his poppy leading up to Remembrance Day on November 11, the 67’s defenceman will, like the rest of us, be thinking about the men and women who have dedicated their lives to keep us safe.

He’ll also be thinking about his dad, Sgt. Carl Bélanger, who recently retired as a supply technician after a 17-year career in the Canadian Armed Forces.

“Remembrance Day is a big day for us,” says Bélanger from his family home in Barrie, where he’s training and getting ready for the 2021 OHL season. “On Wednesday, my dad and I will go down to CFB Borden for 11 a.m. and then go to the Legion.”

The senior Bélanger’s career in the military saw the husband and father of two twice deployed to Afghanistan. His son, meanwhile, is keenly aware of the sacrifice both his dad and their family made and that’s a big part of what they will honour on November 11.

“I saw first-hand how hard it was on my mom,” Bélanger says. “That’s the biggest thing people forget; spouses sacrifice as much as the people that go overseas.”

The first time their dad was deployed, Alec and his sister, Léa, were both too young to grasp exactly what was going. The second time around, there was a more noticeable void.

“You don’t see him, you don’t entirely know what he’s doing but you understand that he’s going away. Thank God he came back, because a lot of people didn’t.”

While Alec may not remember all of the details of his dad’s absences, what he does remember clearly the family reunion when Carl came back from his second trip overseas and Alec, Léa and mom Marie-Annick Gagnon went to pick him up.

“The second time he came back, we went and got him at the base in Edmonton,” Alec says. “For the next two days, my mom, my sister and me were just lying in their king size bed just hanging out and talking.”

The experience of being an army kid, which included a pair of cross-country moves, has inspired Alec, who says a career in the Army is far from off the table for him.

“He’s talked to me a lot about the army and I have a lot of interest in that if pro hockey doesn’t work out,” he says. “If I didn’t have hockey, I would join tomorrow. I know how great of a guy and good of a man my dad is and a lot of that is because of what he learned in the army.”

To sum it all up, Alec Bélanger is a very proud son of a Canadian hero.

“I’m very proud of my dad,” he says. “Being in the army, he showed great courage and selflessness doing what he did. I’m equally proud of my mother who sacrificed so much while my dad was away.”