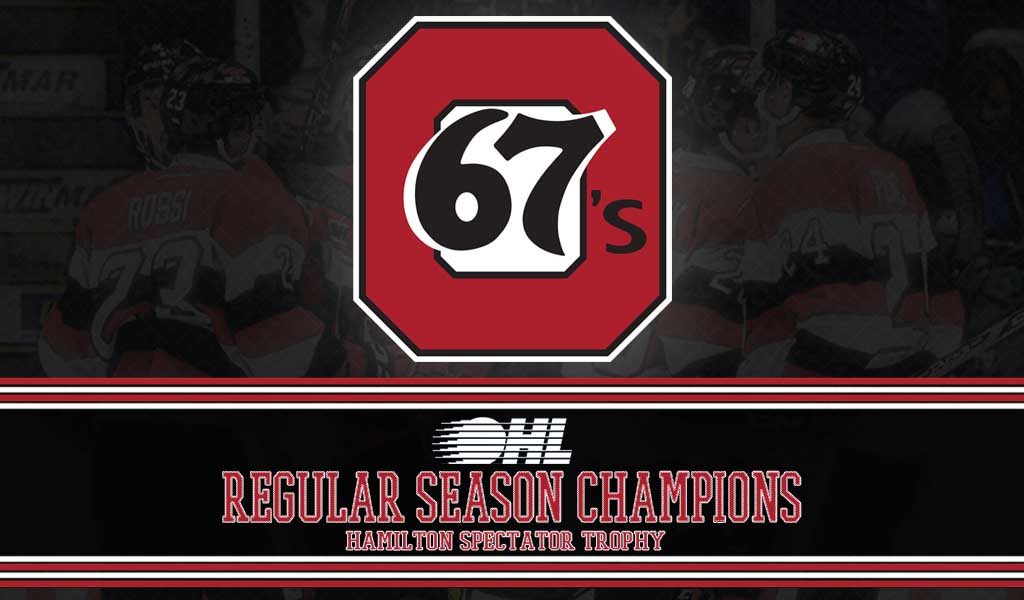 The Ottawa 67’s are 2019 OHL regular season champions, claiming the Hamilton Spectator Trophy for the fourth time in franchise history.

With three games remaining on their schedule, the 48-12-3-2 67’s secured the honour following a London Knights 5-1 loss in Guelph on Thursday.

For the fourth time in history the Ottawa #67s have won the Hamilton Spectator Trophy as regular season OHL Champions!#NoQuit pic.twitter.com/rq01VUXRid

The CHL’s fourth-ranked 67’s have eclipsed the 100-point mark in the standings for the fourth time in club history, securing regular season supremacy after past honours in 1997, 1982 and 1978 under the leadership of legendary coach Brian Kilrea.

The Hamilton Spectator Trophy was first presented to the Ontario Hockey Association in the 1957-58 season.  Winners have gone on to capture the OHL championship 24 times and the Memorial Cup 11 times.  The 2017 Erie Otters hoisted the Robertson Cup two years ago following their second straight regular season title while the 2009 Windsor Spitfires were the last OHL club to complete the trifecta, emerging as Memorial Cup champions.

André Tourigny’s club has surrendered a league-low 175 goals this season in front of goaltenders Cedrick Andree, Michael DiPietro and Will Cranley. The 67’s boast the OHL’s best home record, skating to a 28-3-0-1 mark in the nation’s capital.

The 2019 East Division champion 67’s are chasing their fourth OHL Championship in franchise history and first since they last hoisted the J. Ross Robertson Cup in 2001. The 67’s are also two-time Memorial Cup champions, capturing CHL supremacy in both 1984 and 1999.