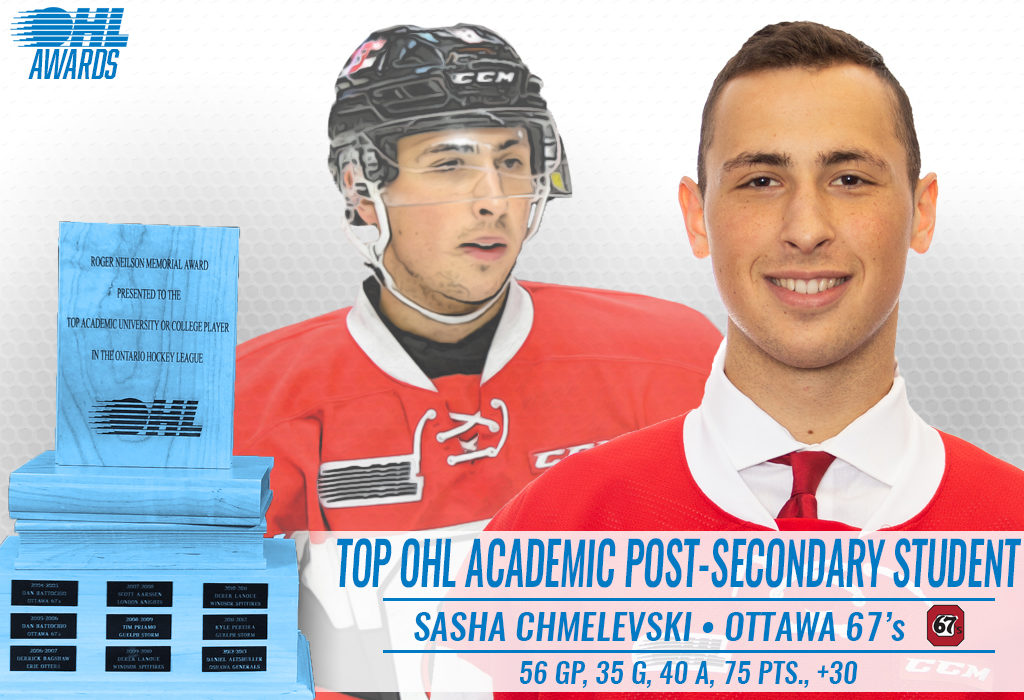 The Ontario Hockey League is proud to announce the 2018-19 recipient of the Roger Neilson Memorial Award for Top Academic Post-Secondary Student.

Sasha Chmelevski of the Ottawa 67’s is currently pursuing courses at Oakland University in Michigan where he achieved over a 96% average.  While his goals are Health Science directed with studies in Biology and Human Nutrition, he also demonstrated his diverse academic interests by opting to take an International Economics course during the winter term.

“I think it’s an honour for me,” Chmelevski said of the award. “All my life I’ve always wanted to be a hockey player but my parents always pushed me to be better in school. Education is something I take very seriously and I take a lot of pride in representing the 67’s with this award.”

A 19-year-old from Northville, Michigan, Chmelevski is no stranger to academic awards having been named both the OHL and CHL Scholastic Player of the Year back in 2017.  On the ice, the 67’s leader produced 35 goals and 40 assists for 75 points in 56 games helping Ottawa to a record finish atop the OHL standings.  Chmelevski has spent almost his entire OHL tenure with the 67’s joining the club during his rookie season after being chosen by the Sarnia Sting in the first round of the 2015 OHL Priority Selection.  Over his 216 career games he’s scored 102 goals and 111 assists for 213 points and was a 2017 pick of the San Jose Sharks and a 2019 member of Team USA winning silver at World Juniors.

“Sasha is a driven leader, whose on-ice achievements speak for themselves,” said Jan Egert, 67’s Assistant General Manager and Director of Scouting. “Throughout his OHL career, Sasha has placed a continued importance on maintaining personal academic development, and has excelled in successfully reaching those ambitions. We are thrilled to see that Sasha is recognized for his efforts and achievements again this season.”

The Roger Neilson Memorial Award is named in honour of the Hall of Fame Coach who served behind the Peterborough Petes bench in the late 1960’s and early 1970’s.  Neilson, a former high school teacher, was a pioneer in stressing the importance of education to all of his players.  67’s goaltender Dan Battochio was the first award recipient back in 2005 and is also one of three two-time winners after receiving the honour again in 2006.  Derek Lanoue (Windsor 2010-11) and Stephen Gibson (Mississauga 2017-18) also share the distinction.

Runner-up for the award was Jonathan Yantsis, now a two-time finalist from the Kitchener Rangers, who also attended Wilfrid Laurier University.